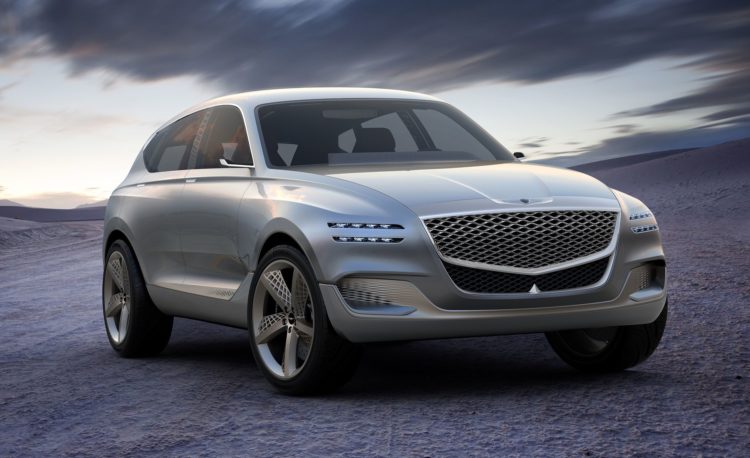 Hyundai’s Genesis has announced the upcoming delivery of their very first ever crossover SUV. It’s a new endeavor for the Genesis luxury brand and it’s already creating a stir. The vehicle will feature a rear wheel drive platform. Our first preview of the soon to be released crossover gives the impression of a futuristic aesthetic that is reminiscent of the robot from “The Day The Earth Stood Still” and it may well create a moment of silence if the performance is anywhere close to its dynamic aesthetic.

Genesis is Hyundai’s luxury brand and it’s been making a quick evolution in quality and reputation. We’ve learned what we could about their upcoming GV80 model for 2020 from spy shots taken in stealth because the automaker is being tight lipped about their new treasure. The shots reveal that they’ve kept the new model relatively close to the concept revealed in 2017. The grille is the same shape and the dual LED headlights are styled in strips. We’re fairly sure that the rear wheel drive proportions are also the same as observed through the camouflage.

Perfect timing for its arrival

Genesis is making a wise move in their presentation of a new line of SUV crossovers. Th United States market for SUVs in large and it’s expected to grow within the next couple of years at least. The presentation of a mid-size luxury crossover couldn’t come at a better time and with the ground that Genesis has been gaining in the luxury vehicle market their timing for this precise vehicle with its novel aesthetic couldn’t be better timed. It comes on the heels of the smaller sized GV70 and while bearing the same DNA the GV80 is destined to have its own personality in the mid sized classification.

Some assumptions about what to expect

We’re making the assumption that the new GV80 will come equipped with standard rear wheel drive but will probably be offered with an option for an all wheel drive edition. Aside from this, we’ve not been able to unearth any other details with regard to the platform. The powertrain is likely to be the 3.8 liter V-6 and we’re assuming again that this will be the standard. If they follow true to form, Genesis will probably make a later gesture of offering the 2020 Genesis GV80 in a twin turbo 3.3 liter V-g as well as a stronger and more powerful 5.0 liter V-8 option because it follows a sound strategic logic for meeting consumer demands currently showing up in the trends. There is also the rumor that there may be a performance oriented vehicle in the works that will follow closely with the N brand for the GV80, but don’t hold us to that, it’s just an educated guess at the time.

The Genesis 202020 GV80 is the brand’s response to their nearest competition the Volvo XC90, the Mercedes-Benz GLE, the BMW X5 and the Audi Q7. We’ll probably have to wait a good year or so to get a realistic idea of how it stacks up against stiff competition in the market today, particularly in a race up against some well established luxury brands.

Although the model year is classified as a 2020, the manufacturer has confirmed that the new 2020 GV80 is scheduled to make its debut at some time in 2019. They’re not giving away any estimations of which month yet but it won’t be offered for sale in the United States until some time in the early part of 2020. The debut will give the world an up close look to whet the appetite. The goal of Genesis is to offer their new crossover SUV at a sticker price that undercuts the competitors by a few grand, but they’ve not yet disclosed how much that will be. Based upon what the others are going for, we can estimate that the starting price for the Genesis GV80 should be somewhere around $50,000. Until then, we’ll keep our eyes peeled for their grand unveiling without the camouflage later in the summer.