Home
Travel
Aviation
The Emirates Windowless Plane: What You Need to Know
Prev Article Next Article 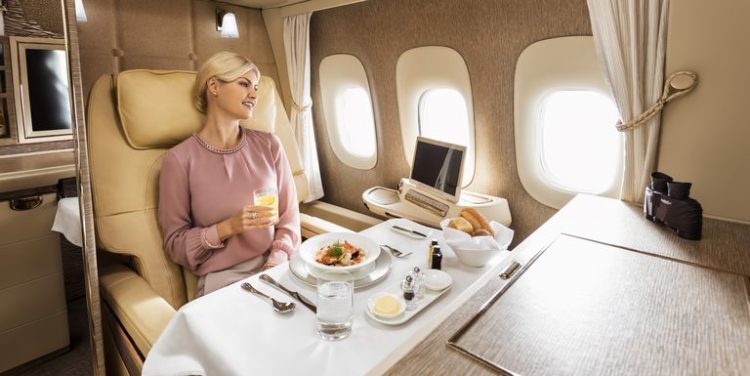 When we think about the idea of a windowless plane, the question becomes have all commercial planes, propeller or jet powered, always have windows? The available evidence shows the answer is yes, primarily so passengers will not lose their spatial sense and to avoid the seating arrangements being too claustrophobic. These are two factors that remain in airplane design today.

Now Emirates Airlines is in the process of designing a windowless aircraft, where the windows will be replaced with high definition projection views of the outside the aircraft. The question has been asked, “Why have a windowless plane at all?” The advantages and disadvantages to the passengers and flight crew must be evaluated before moving on to consider potential psychological effects of the design.

The first concern of a windowless plane is how flight attendants will deal with emergency landing situations. Having direct visual sight of the outside of the airplane is essential in order to direct passengers when it is safe to begin exiting the aircraft. Consider the landing in the Hudson River of US Airways Flight 1549. What flight attendants and passengers actually saw was a far different experience than the usual “hard landing” when an aircraft sustains a harsh physical impact.

According to the flight attendants interviewed after the Hudson rescue, the Airbus experienced “one impact, no bounce, then a gradual deceleration.” What happened next was the ebb tide began to take the plane southward, an experience few flight crews or attendants have personal experience with. In such a situation it is possible that either any exterior cameras would cease to function or their view would be underwater, making them useless for the purposes of evacuation. Without windows, how do the flight attendants respond?

A second problem is the other senses of the passengers would contradict the reality of what is actually happening outside of the airplane. For example, during a thunderstorm passengers would be hearing roars of thunder in addition to the hum of the plane’s engines, yet visually they would be seeing projected images of sunny skies or clear nights. Putting aside the potential disorientating psychological effects, the experience would be confusing mentally as what the eyes see would contradict other realities. In the example of the Hudson crash, how will passengers adjust to this disorientation in the event of an emergency?

One of the common problems passengers on long flights have is how to deal with jet lag. Regardless whether an aircraft has windows or not, a passenger’s body will still have the same experience so a windowless design is not likely to affect this phenomenon. When addressing the issue of the general in-flight experience, many passengers take a nap during longer flights, especially those in first class cabins, so the windowless design is likely to have only a minimal impact on the passengers.

The arguments against the windowless concept here have largely been based on emergency scenarios. Actual emergency situations that occur when flying as a percentage of the total number of flights makes flying the safest way to travel long distances. And the truth is no one actually knows how they will respond in an emergency, windows or no windows.

But the larger question is why Emirates would want to consider this concept from a corporate viewpoint. The FAA has a directive specifically addressing the types of materials windows on an airplane must adhere to before being permitted to be put into operation. The skinny on this document is that glass and acrylic materials have certain properties that, when combined with metal constructions, offer certain advantages beyond simply a passenger being able to have a view of an expansive sky.

Still, an all-metallic aircraft would be lighter and therefore faster, saving the company money on jet fuel costs. The suggested high resolution cameras would need to have significant research done to meet FAA safety regulations currently not in place. Should a camera or the cameras fail during flight, passengers would clearly be disoriented and many are likely to panic to some degree. Anyone who has seen the comedy movie Airplane has an idea how extreme the reactions can be.

Emirates contends that the windowless airplane opens the door for a better passenger in-flight experience. The width of seats would be increased, and for those who fly first class the ability to have ceiling to floor privacy screens would become a reality. Emirates also says that the in-flight entertainment systems would be greatly enhanced (as a result of the savings?), once again upping the passenger experience.

From a passenger perspective, would a windowless aircraft be the equivalent of flying in a rocket? Even the International Space Station and ventures to the moon have windows that allow astronauts to get a physical view of their exterior surroundings. It is likely that a few windowless aircraft would have to be built to test the effects on passengers, and those passengers would have to be volunteers. Maybe it is an opportunity for a select group of people to get a free ride to various parts of the globe.