Home
Lifestyle
The “Keeping it Clean” Mindset for Life and Investing 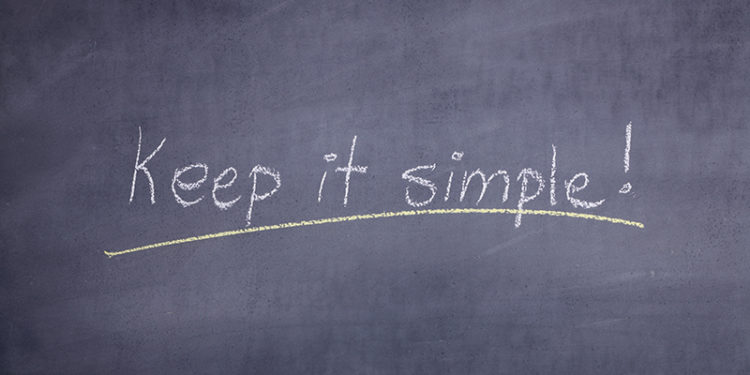 The older I get the less I want things to be complicated.  I believe that most people share that sentiment but I also believe that most people are extremely susceptible to falling prey to societal conventions and pressures that they tend to move away from the simplicity we can all enjoy while living our lives.  What I find so fascinating about life is that the smartest people in the world often tend to speak in simple, easy to understand terms and live by extremely simple guidelines.   Take Warren Buffett for example.  The man is an analytical genius and if you ever look up any of his quotes they seem so obvious don’t they?  It’s because they are.  But abiding by many of his principles, while they sound simple, often tends to get complicated because there’s so much noise out there distracting us from the very core values and principles we should be living our lives by.  A guy like Warren Buffett is a machine at not letting that outside noise in.  You may also be familiar with the ever famous acronym K.I.S.S. or Keep it Simple Stupid.  I have my own little way of living life and I call it “keeping it clean” which follows a relatively similar model as K.I.S.S.  Let’s take a look at what I’m referring to.

So what is “keeping it clean” exactly?  There are two ways of looking at it.  From a life standpoint it’s keeping things as simple as possible by not letting anything build up and get too overwhelming.  And I’m talking about all facets of life.  Don’t let your garbage overfill.  Don’t let your bills pile up.   Pick up that pile of clothing that keeps getting bigger.  Keeping it clean is more than just literal.  It’s a way of never piling too much onto anything by being proactive.  It’s remembering that doing just a little bit of something each day will prevent anything from becoming too much.   From an investment standpoint I refer to “keeping it clean” as making investments that aren’t messy.  I just want to make an investment where I can simply click a button, buy it or sell it, and that’s that.  Messy to me is owning physical real estate.  That creates a ton of crap I don’t want to deal with.   I’m not saying that owning real estate is wrong, I just don’t think it’s “clean” in the sense I’m talking about.

There are loads of examples I can give you from both life and work that demonstrate how I keep it clean but there are two that for whatever reason I’m kind of obsessed with.  The first one is a life example.  I always find that if I leave one pair of shoes on the floor it’ll eventually lead to me leaving at least 6 pairs of shoes on the floor.  By the time those 6 pairs of shoes are on the floor I’ll end up leaving those on the floor for weeks because it just looks like too much of a pain to take care of.  Solution?  Every single time I take my shoes off I put them in my closet in the rack.  That’s 100 times easier than letting them pile up.  I don’t have a perfect track record doing this but it’s pretty close.  Let’s move on to a work example that I think most people can relate to: email.

I absolutely cannot still getting an inbox that’s filled with 1000 messages.  To take care of this I basically check email about once an hour and “keep it clean.”  A filled inbox bothers the hell out of me.  I cannot stand it.  Another work example is bills.  I pay my bills the second I get them.  I hate bills and I’d rather just get it over with.

And frankly, look at my job!  It’s all online.  My server is managed somewhere by a company I pay.  I can do this job anywhere.  I don’t have to drive anywhere.  I don’t have to manage much.  There’s no physical element to it.  It’s a matter of clicking buttons and typing stuff.   If there’s a job where eventually all I have to do is just talk, sign me up (and I know that’s coming).

I mentioned this before.  To me there are very few investments easier and cleaner than stocks.  With the press of a button you can either buy or sell a stock and there’s no dirt, lifting, managing, nothing.  It’s as easy as that.  That’s about the cleanest investment there is.  What’s even cleaner than that?  Owning a very small bucket of stocks or an index fund.  It’s about as close to “set it and forget it” as you’re going to be.   You really only need to watch these portfolios every few weeks or even just once a quarter if you truly have the discipline.

Putting it all Together

I’m not saying this lifestyle is for everyone.  It’s just the way I prefer to live: as simple and without as much mess as possible.  There’s nothing wrong with being messy and managing a ton of things.  It’s just not my way is all.  And if you’re interested in keeping it clean, give it a try.  Be proactive, not reactive.  Managing life in much smaller chunks is 100 times easier than letting things pile up and having to tackle them in huge bunches.