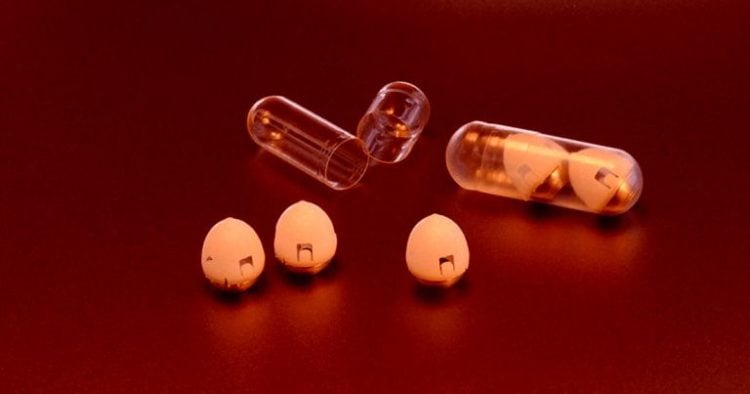 Researchers at the Massachusetts Institute of Technology have created the prototype of a pill that type 1 diabetics can swallow and deliver their required dose of insulin, potentially replacing the current syringe regimens used by many diabetics, including the insulin pump. Though they are early in the testing procedures, the hope is that the pill will be available within the next decade or two.

The pill is more of a nanotechnology than a new form of insulin. Insulin is the body’s hormone that converts the food you eat into usable glucose for energy. Type 1 diabetics do not have the ability to produce this essential hormone, resulting in their blood sugar levels becoming dangerously high. This leads to death if not treated because the body’s chemistry will eventually turn into a toxic mess. Ina normal person, when there is too much sugar, the body will produce more insulin and store the converted sugar in fat cells.

In the current design, the insulin pill contains insulin that is injected into the stomach lining of the patient through a number of tiny needles. The process is basically the same as the current injection system used by millions of type 1 diabetics, but removes the possibility of skin problems and misreading dosages that can result in uncontrolled blood sugar levels. Once the pill hits the stomach, a protective coating is dissolved by the stomach acids, releasing an array of nano needles. The scientists have developed a guidance system of sorts that ensures wherever the needles from the pills land in the stomach, they will find a wall lining and then automatically inject the insulin.

Current testing is being done on pigs with a reasonable level of success, so the research team is hopeful that the concept can be improved to be used in humans. One of the drawbacks is that while a normal dose of insulin for the average type 1 diabetic, 5 milliliters, can be injected, there is no technology that will ensure doses that are larger.

The amount of insulin a diabetic injects into their body every day varies based on a number of factors, which include the recommended diet, exercise, weight, and severity of the diabetes. Many diabetics are on a two shot regimen designed to mimic the body’s normal regulation of blood sugar. A longer acting shot that remains in the system for as long as 24 hours is takes once a day to keep the blood sugars even when the patient is not eating. The second type of shot is taken at meal times, using a shorter acting insulin that it intended to convert the food that is eaten to usable energy forms.

This second type of insulin is likely to be what is used in the new technology, as it will be easier to test for effectiveness and safety. The long term insulins can require the patient to take as many as 20 times more insulin than the current testing regimen allows for. A pill can only be made to be so large before it becomes a choking hazard. It is reasonable to say that the initial availability of the nano needle insulin technology will focus on the short term varieties, combining it with the current external syringe injections.

Though this sounds promising, the future hope is that there will be new types of insulin developed that will minimize the possibility of long term complications such as diabetic retinopathy and diabetic neuropathy. While the new delivery system will definitely make the type 1 diabetic’s daily routine less stressful, it is not being tested in conjunction with any new types of insulin. Insulin must be injected into the patient because the body’s natural stomach acids will destroy insulin before it is able to be absorbed into the blood stream. The new technology does improve the quality of patient care, and has the potential to deliver other drugs into the body and avoid the traditional syringe.

A cautionary note. As the first phase of the development and testing continues in pigs, it will be some time before the technology can be tested in humans. All new drugs and technologies must first go through testing protocols designed by the Food and Drug Administration before being made available to the public. Failure at any protocol level can set that release date even further back. Nanotechnology and biotechnology are very hot stocks at this time, so from a financial perspective you may want to look into the potential of this company stock.