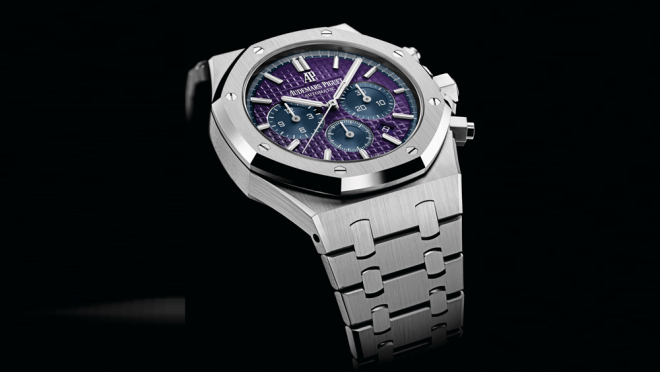 If you’re an avid fan of all things horological, the words Audemars Piguet are probably familiar to you. And you probably know the likelihood of owning one is rather small unless you’re blessed with a very healthy bank balance indeed. While the watchmaker isn’t the oldest in Switzerland – at a mere 144 years, it’s little more than a babe in this land of ancient clockmakers – it has become one of the most respected.

Since its inception in 1875, Audemars Piguet has manufactured impeccable wristwatches loved the world over for their strong, clean designs and subtly powerful features. If you get a chance to scrutinise one of these timepieces up close, we recommend you take it. Every watch in the collection is a masterpiece of horological engineering. So, when Audemars Piguet says it has something extra special up its sleeve, you know it’s going to be spectacular. Enter the Audemars Piguet Royal Oak, a $112,000 wristwatch in platinum with an exceptional Grande Tapisserie patterned dial and accompanying navy blue sub dials. Perhaps the most special thing about the Royal Oak, however, is the fact it’s the only one to exist anywhere in the world.

Let’s take a closer look at this unique timepiece and find out why Audemars Piguet decided to create it in the first place.

Audemars Piguet Joins One Night for One Drop

On March 8th, Las Vegas will play host to the prestigious One Night for One Drop Gala, a non-profit event designed to raise money for the One Drop water aid charity. The ‘one of a kind’ Audemars Piguet Royal Oak is being offered to the lucky winner of its annual live auction. It’s actually the second time the watchmaker has provided the event with a prize of this caliber. In 2018, it created the Royal Oak Perpetual Calendar watch; another unique piece in rose gold.

That particular watch ended up selling for $240,000 which tells you everything you need to know about guests in attendance at the One Night for One Drop Gala. They have some serious money to burn and they’re looking for something truly spectacular. And the Royal Oak definitely fits the bill. It’s a 41mm all platinum self-winding chronograph with an intricate patterned dial and a platinum bracelet.

According to Audemars Piguet, the unique timepiece is worth around $112,000 though it is expected to exceed the figure at auction. It’s not the only prize up for grabs on the evening in question. Guests can also bid on a McLaren 570S Spider, a seven night stay on the world’s largest private yacht and a holiday in St Tropez. All proceeds from the live auction will go to One Drop’s campaign to provide safe drinking water to people across the globe.

The Unlikely Link between Audemar Piguet and Cirque du Soleil

The unlikely friendship between one of Switzerland’s most respected watchmakers and the founder of both Cirque de Soleil and One Drop has led to some interesting branding opportunities. In 2009, Cirque de Soleil creator Guy Laliberté wore an Audemars Piguet timepiece – the Royal Oak Grand Complication – on a ten day trip to the International Space Station.

Audemars Piguet CEO Henry Bennahmias says Laliberté was already a keen fan of the manufacturer’s wristwatches before the two met. He was struck by the entrepreneur’s adventurous approach to event planning and performance, saying “…starting from his idea of a circus show without animals at a time when nobody could imagine it […] Hats off to his human talents.” In the years since, Audemars Piguet has maintained a close relationship with Laliberté and the One Drop charity, in particular.

The watchmaker has spent nearly ten years working with the water charity, in both the public and private sphere. On March 8th, it’s likely Bennahmias will be in attendance to represent Audemars Piguet and its support for the foundation’s work. Lucky guests will get the chance to enjoy incredible performances from the Bellagio O Theatre, the Blue Man Group, Hans Zimmer, and world renowned choreographer Alexander Ekman.

As always, the One Night for One Drop Gala will be an evening to remember. If you’d like to donate to the One Drop charity or just know more about its ongoing projects, visit the website at www.onedrop.org/en