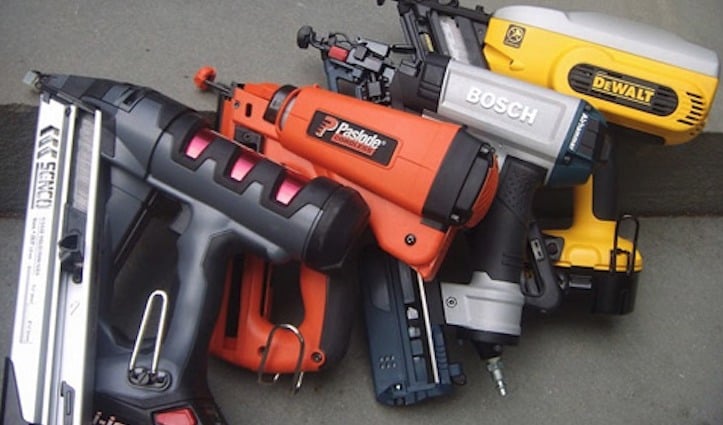 When it comes to nail guns, the type of product you choose can make a big difference when it comes to how effective it is for your needs. Obviously, one of the things that will determine the particular brand of nail gun you want to buy involves how often you plan on using it, exactly what you’re using it for, and how much punishment it’s going to need to take in order to get the job done. After all, your choices will be a lot different if you’re only using the nail gun occasionally as opposed to using it on a day-to-day basis on a professional job site.

Generally speaking, you can’t really go wrong with a nail gun if you purchase one from a company like DeWalt, Ryobi or Bostitch. Hitachi and Senco also make some excellent nail guns. Out of these five companies, the one you choose will likely come down to a matter of personal preference. With that being said, it’s important to know some of the key points about each of these companies so you can make an educated decision. Each of the companies listed below manufacture a number of different types of nail guns, all designed fit individual needs. Therefore, it’s important to know exactly what type of nail gun you need to do whatever it is that you’re trying to do. Aside from that, it’s important to know something about each one of the five aforementioned companies so you can decide which one best fits your needs. DeWalt is well known in the tool manufacturing business. In reality, it’s well known among individuals that probably have never had a desire to touch a tool in their life, as they have still heard of the company name. This is widely because this company has been producing high-quality tools since the 1920s. It’s always had an excellent reputation and the tools are relatively easy to find. You don’t have to drive yourself crazy looking for something that will work, making it even more likely that you will ultimately choose something from DeWalt. As far as performance goes, you really can’t beat anything made by this company so you don’t have anything to worry about there. It’s interesting that some people seem to have something against buying Ryobi tools, largely because they’re trying to buy tools that are made in America. What a lot of people don’t know is that this Japanese manufacturing company has plants in six different countries, and there is one in the United States. It also produces some excellent tools, including nail guns. It’s been in business since the early 1940s, and it’s more than capable of competing with any of the other companies out there. If any of these companies have the market cornered when it comes to nail guns, it’s Bostitch. The company actually specializes in nail guns and other types of tools that fasten materials together. In addition, the company was formed back in 1896, making it one of the oldest companies of its type in existence. As such, it’s developed an excellent reputation. The only thing that has consumers concerned is that as of late, the company has actually been purchased by Stanley. It isn’t that there’s anything wrong with Stanley tools, it’s just that people hate to see anything change at Bostitch. Currently, it remains to be seen how this merger will change their products, if at all. Hitachi was founded in 1910 and specializes in nail guns, electronics and other various types of equipment. In reality, this is a company that manufactures a lot of different types of products, ranging from tools to televisions. However, the company has always been well-respected and has produced some of the best tools available today. The same is true for its nail guns. In addition, it offers a fairly wide variety of nail guns so you can find one that fits your specific needs. Senco has been in business for about 60 years and it’s probably the newest company on this list. That should tell you something about how much history is involved with these five companies. Just like the other four, Senco commonly provides tools like nail guns for sale. You can choose one that is designed for occasional use within the home or you can go all out and choose a professional-grade nail gun that can stand up to the rigors of being used all day, everyday. When it’s all said and done, it’s up to you. With all of the different types of nail guns that are offered through these five companies, you’re bound to find something that is exactly what you’re looking for.