Home
Business
The Top 20 Startups in the U.S. in 2019
Prev Article Next Article 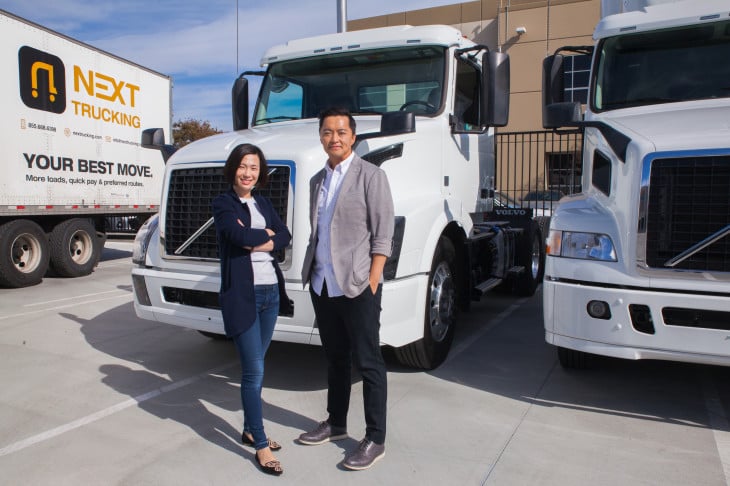 Start-ups seem to spring up every day, some offering the kind of bold, innovative ideas that catch on like wildfire, and some relying on stale technology, unsustainable business models, and disorganized team structures. Of the former, a fair number are on track to hitting the elusive 1 billion dollar mark this year. Using information gathered from Forbes and other sources, we’ve rounded up the fastest-growing, most promising startups of 2019.

Founded in 2017, Travis is revolutionizing language. Founders Ziel and Yap have created an A1 bot that can translate up to 80 different languages (covering everything from Afrikaans to Welsh) when it’s online, and 20 of the world’s most commonly spoken languages when it’s offline, making translation possible even in remote areas where connectivity is an issue. As the device can auto-recognize speech, it doesn’t even require the language to be known by the user in order to translate it, making it an invaluable asset to travelers and international business people alike.

Tired of excessive overdraft fees, Jason Wilk decided to start fighting back. The result was Dave (a reference to the biblical story of David and Goliath, David, in this case, being your average Joe, and Goliath being the banks). Central to Dave’s claim to fame is an app that tracks the user’s expenses and alerts them when they’re close to going overdrawn. Since its inception in 2016, the company has enjoyed massive success: as well as hitting almost 10 million downloads, it had the honor of being named Apple’s “app of the day’ in April 2017.

Like Dave, Divvy is an expense tracking service that offers budgeting and spend management tools to its users. Unlike Dave, whose clientele consists of private individuals, Divvy focuses on the corporate market. While the tool itself is free, Divvy makes its profits by taking a portion of the merchant’s fee on any purchases made by customers using its custom Mastercard. Since its foundation, clients such as WordPress, Evernote, and Qualtrics have been lining up to get a piece of the action, increasing Divvy’s client base to an impressive 3000 corporate users.

Described by its website as a “curated boutique wholesale marketplace connecting more than 35,000 local retailers with thousands of emerging and established brands”, Faire is helping stores stay alive by guiding retailers towards items that are guaranteed to sell (and if they don’t, they’ll get a full refund in the first 60 days). Selling everything from accessories, stationery, kitchen items, beauty products, and women’s apparel to home décor and kid’s lines, the company now serves over 35,000 stores.

Founded in 2013 by Mathilde Collin and Laurent Perrin, San-Francisco based start-up Front is taking giant strides in helping companies improve productivity, reduce admin and improve team collaboration by offering a shared email inbox that centralizes email, Facebook, Twitter, SMS, webchat and 50+ apps in one place. The company claims to save each team member 6 hours per week, reduce response time to incoming messages by 56 minutes, and increase team productivity by 18%.

Headquartered in San Francisco, CA, Allogene is pioneering the development of allogeneic chimeric antigen receptor T cell (AlloCAR T) therapies for cancer. Its team is led by Dr. Arie Belldegrun and Dr. David Chang, who are jointly responsible for the first CAR T cell therapies approved by the U.S. Food and Drug Administration.

Patreon founder Jack Conte doesn’t think a career in the arts should result in individuals struggling to make ends meet. “Deciding to be an artist shouldn’t have to be a difficult conversation,” he says. “It should feel like a viable career choice.” To that end, Patreon matches artists with “patrons”, offering the latter the chance to experience the talents of the former in return for a contribution. By the end of 2019, the company predicts over a billion dollars will have made its way into the pockets of formerly struggling artists.

Traditional ID cards and keys could soon be a thing of the past if Proxy founders Denis Mars and Simon Ratner have their way. The pair have created an app that allows users to access any building at which they’re registered without the need for keys. Over the coming year, Ratner and Mars aim to build on the premise of their original idea to cover identify verification for event check-in and ride-sharing.

Before 2015, watching overseas soccer leagues in the US was a struggle. Thanks to the efforts of Fubotv’s founders, Sung Ho Choi, David Gandler and Alberto Horihuela, soccer fans can now live stream matches at a far cheaper rate than they could with cable. Having secured deals with the likes of beIN Sports and Univision, Fubotv now offers over 90 channels for a starting price of just $54.99 a month.

With a customer base that includes the likes of SoulCycle, Yahoo Japan and WeWork, San Francisco based startup Kong has developed a hugely successful open-source platform and line of cloud services to manage and monitor Application Programming Interface and Microservices.

When Lattice founders Jack Altman and Eric Koslow got their first job experience at startup Teespring, they got a glimpse into a working culture that wasn’t entirely pleasant. Their response was to create Lattice, a people management platform that encourages employers to move away from traditional methods of performance management and focus on career development and other means of inspiring engagement and driving performance. Today, Lattice works with more than 1300 clients, including Reddit, WeWork, Cruise, and Asana. “Lattice supports each of us to focus on doing our best work and not be burdened with clunky systems that subscribe to outdated notions of performance management,” Katelin Holloway, VP of People at Reddit, says.

In each year since its launch in 2015, Next Trucking has doubled its revenue, culminating in $46 million taken last year. With the aid of predictive load technologies, the company specializes in drayage solutions designed to reduce congestion at the state’s busiest ports and provide a more streamlined approach to goods movement. In 2019, it raised $97 million in Series C funding, bringing the total raised so far to more than $125 million.

Created in 2012 by Evan Wallace and Dylan Field, Figma offers a browser-based tool that allows designers to work in collaboration. Initially launched as a free product, Figma started to see a return on its investors $83 million capital when it started charging a subscription fee of $12 per editor per month for professionals, and $45 per editor per month for businesses. Its high-profile clients were clearly not deterred by the introduction of a fee, and Figma can currently count teams from the likes of Microsoft, Volvo, Uber, and Square amongst its users.

“FourKites connects the dots across global supply chains”, or so says its website. In practice, this means giving shippers real-time visibility over their deliveries, letting them know precisely were in the supply chain they are, when they’ll be delivered, and anything that happens between origin and destination. “If you are a shipper, once the truck leaves your facility you have no idea what is happening,” founder Matt Elenjickal tell Forbes. “That is how supply chains are run even now without a solution like FourKites.’ Fourkites are clearly doing their best to fill the gap, and with huge chains such as Best Buy, Kraft Heinz, Nestlé and Smithfield Foods all buying into their technology, it seems they’re succeeding.

Grove Collaborative CEO Stuart Landesberg has done what others could only dream of: spot a gap in the market not filled by Amazon, and flood it with affordable, natural products, ranging from laundry detergent to sponges. Initially, Landesberg marketed other brands only, but in 2016 he recognized the future lay in creating his own, easy-to-ship items. The company’s own-brand products now constitute 50% of its sales.

Google X spin-off Dandelion was founded by Kathy Hunnun in 2017. Using revolutionary new tactics (including creating a new drilling approach to reduce the amount of industrial equipment required to install pipping; offering prospective buyers a “zero dollars upfront” payment option; and employing cost-effective retrofit solutions to high-cost heating), the company is playing a significant role in transitioning the US away from traditional heating systems and towards zero emission alternatives. Hunnun, who now serves as Dandelion’s CEO, has already been named as one of Fast Company’s most creative people, while the company’s heating systems have won the accolade of being called the “new solar” by Teslanomics.

Founded in 2014 with the backing of Acero Capital, Battery Ventures, General Catalyst, and Warburg Pincus, Contrast Security provides security technology designed to allow software applications to protect themselves against cyber-attack and to alert developers to vulnerabilities. “The work that previously had to go through security experts now goes directly to developers,” Arshan Dabirsiaghi, the company’s co-founder and chief scientist explained to Forbes.

Like Contrast Security, Cybereason is focused on providing technology to protect against cyber-attack. Developed by Lior Div, Yossi Naar, and Yonatan Striem-Amit during their time in the Israel Defense Forces’ elite intelligence unit, Unit 8200, Cybereason runs off a platform that provides 24/7 endpoint detection and response to security threats. Having secured its initial funds (thought to be around $88.6 million) from CRV, Lockheed Martin, Softbank, and Spark Capital, it recently raised a further $200 million in new financing from SoftBank.

Developed to coincide with the rise of cryptocurrency, Chainalysis creates, develops and markets compliance and investigation software used to identify the use of cryptocurrency in fraud, extortion and money laundering. Its technology has already been embraced by some of the world’s top institutions (including the FBI and IRS), while the company is growing at an exponential rate, with its global team working from offices across New York, London, Washington D.C. and Copenhagen.

Anyone who’s looked into learning a language online will have heard the name Duolingo. Since its inception 7 years ago, Duolingo has taken off at a phenomenal rate; with 28 million users worldwide, it can legitimately claim to be one of (if not the) most popular online language learning tools in the world, and certainly one of the top startups of the past decade. Currently estimated by Forbes to be worth in the region of $700 million, Duolingo is well on track to hit its target of $8.7 billion by 2025. Founder Von Ahn, meanwhile, is planning to conquer the world with his creation. “We are going to continue with languages until most everybody in the world who is trying to learn a language is using one of our products,” he told Forbes.