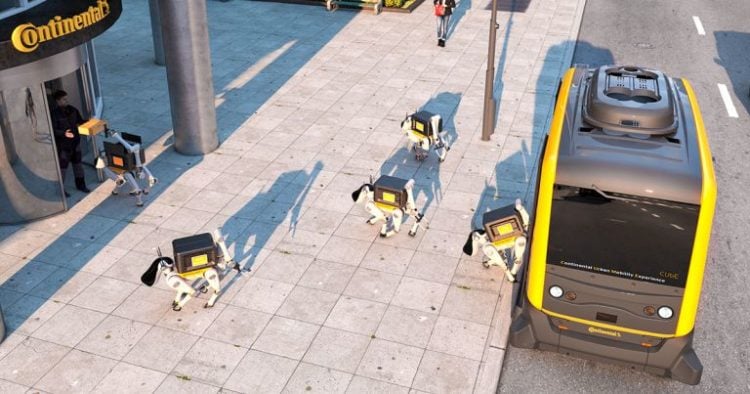 The automotive manufacturer Continental is envisioning a future filled with robotic dogs. This might sound adorable, but it should be mentioned that there is a pretty practical side to this plan as well. Something that could provide it with a non-zero chance of coming into existence.

In short, Continental is interested in the concept of autonomous deliveries. This is something that it shares with a wide range of other parties out there, which is wholly unsurprising because autonomous deliveries promise to be a revolutionary change in logistics. After all, if deliveries can be automated, businesses could secure incredible savings by eliminating no longer necessary positions. Moreover, businesses could ensure better performance as well because machines are capable of a degree of consistency that humans cannot hope to match, meaning that so long as the systems have been set up right, they should be able to produce the desired results with a lower error rate than what even the best humans can manage. As such, it is no wonder that everyone from Google to a slew of leading universities are looking into autonomous vehicles of one kind or another as well as related concepts.

Continental is teaming up a startup called ANYbiotics to come up with a robotic dog that can cover that last stretch. In short, an autonomous vehicle will cover most of the distance, but once the autonomous vehicle has reached the intended destination, it will be the robotic dogs called ANYmals that will be responsible for completing the deliveries. In this, said robots will be assisted by their ability to climb stairs, their ability to ring doorbells, and presumably other features that will be included to make them capable of handling an even wider range of potential obstacles.

Could We See Something Like This in the Future?

The robotic dogs are real, but there is still a very long way to go before Continental’s system can be implemented. For example, autonomous vehicles are still a very long way from being perfected, meaning that it will take time before they can be trusted to deliver packages to a wide range of addresses on their own. Never mind the legislation that will need to be passed on how they can be used and in what contexts they can be used. Similarly, while the robotic dogs have already demonstrated some very interesting capabilities, they are still very far from the point when they can be trusted with everything that a delivery person can manage. Something that isn’t even considering more practical factors such as cost and speed.

However, assuming that everything manages to come together at some point in the future, something similar to Continental’s system isn’t impossible. After all, there is a huge appetite for deliveries, meaning that the market is definitely there and will probably remain there for a very long time to come. Instead, the bigger issue is whether there will be a market for Continental’s exact system rather than, say, the solutions that are being worked on by one of its competitors. In particular, it is worth noting that Amazon has already started working on delivering packages by using drones. Moreover, it has shown a very strong interest in autonomous drones, which should make it clear that even if Continental can create its system, it won’t have an open field to claim. For robotics enthusiasts, this will presumably make the future of logistics a very interesting one to watch unfold before their eyes in the not too distant future.