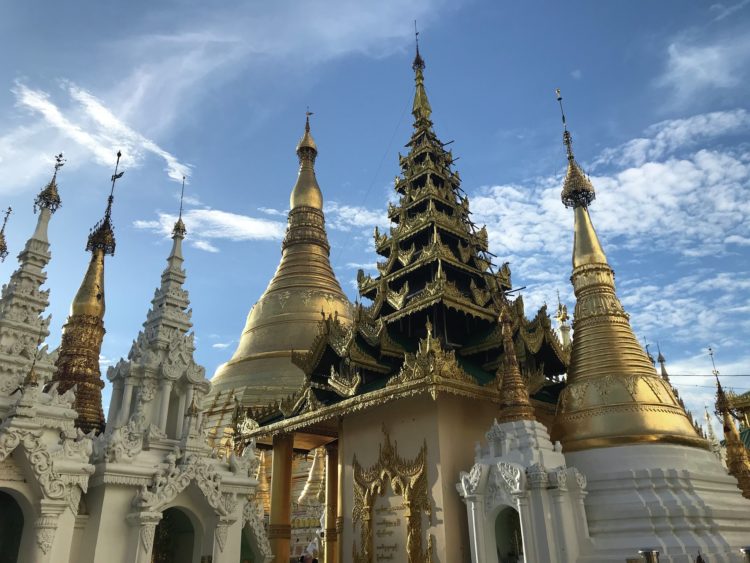 The city of Rangoon – now called Yangon – once the capital of Burma, is a bustling Southeast Asian city with colonial remnants, gleaming gold-gilded pagodas and some fine hotels and restaurants. As democracy ‘lite’ takes hold following the transition from 50 years of military rule, it’s still possible to see rural life only a few minutes away from the hustle of central Yangon.  The Strand Hotel, a historic architectural landmark masterpiece, was built in 1901 and acquired by the Sarkies brothers, known for Singapore’s Raffles and Penang’s Eastern & Oriental Hotels. Carefully restored in 1989, The Strand underwent further remodeling in 2016, but has meticulously maintained its gorgeous chandeliers, large ceiling fans and impeccable period furnishings. A new wing with an outdoor swimming pool and state-of-the-art fitness center is set to open in November.

The Strand’s location – in the heart of colonial central Yangon – makes exploring the important city sites easy in spite of the near constant traffic for which Yangon is known. And for bibliophiles, guests can perhaps channel their inner written prowess as literary luminaries such as Rudyard Kipling, Somerset Maugham and George Orwell have all hung their hats at The Strand in years past.

Stepping into The Strand, one immediately gets the sense of a consummate historical past blessedly married to today’s modern amenities. Its 31 large, beautifully outfitted suites manned by 24/7 butlers leave guests wanting for nothing. There are teak furnishings, shiny lacquer wood art pieces, intricate carvings and Burmese antiques at every turn. Plush bedding with Egyptian cotton sheets, separate seating area, work desk, ample outlets, vanity, plentiful closet space, marble and teak bathrooms with large soaking tubs, daily replenished fresh exotic fruit platters, and nightly fresh baked sweets made it extremely difficult to leave. There is a small, but well-curated gift shop and equipped business center. Equally important, The Strand has perfected the art of well-known Burmese hospitality. Genuine smiles are ever present, service is expertly executed, but never hovering, and sincere efforts are continuously made to assure complete guest comfort at every turn. 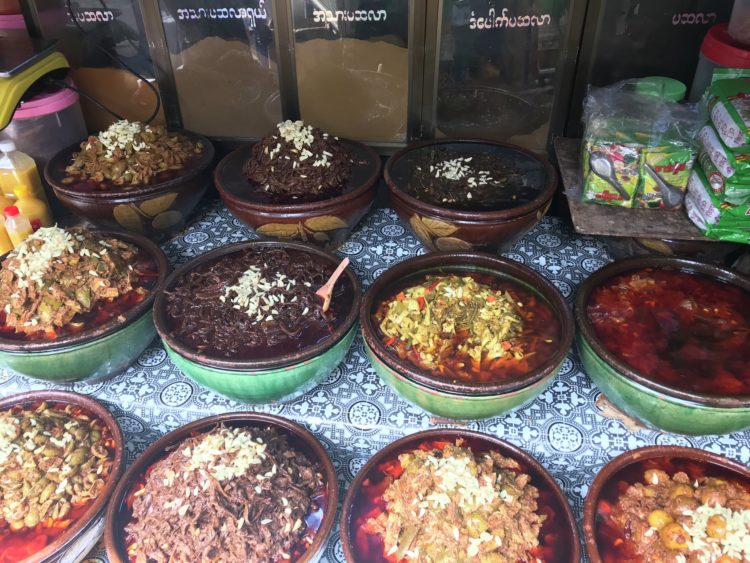 There is certainly no shortage of good dining options in central Yangon. Excellent breakfasts can be enjoyed at The Strand Café where Euro-style cappuccinos coupled with fresh, made-to-order eggs and house-made French pastries satiated me until long past lunchtime. High ceilings and period furnishings added to the colonial ambience. At The Strand Hotel’s delightful Sarkies Bar, resident expatriates and visitors enjoy cocktails in an elegant, yet comfortable setting. I ordered one of its signature cocktails, a delicious Strand Sour, before heading out to dinner.

A ten-minute walk from The Strand brought me to Monsoon Restaurant serving Burmese, Lao and Cambodian cuisine. Set in a airy colonial two-story building, I devoured the Burmese staple of Mohinga –a hearty fish soup served with lime, chili, hard-boiled eggs, coriander and bean sprouts ­– followed by an excellent Burmese vegetarian curry.

In a faux-Tudor colonial villa one afternoon, I enjoyed a lunch of crunchy spring rolls, pumpkin soup and spicy beef curry at the House of Memories Restaurant. The building is historically significant as the owner allowed General Aung San in the mid-1940s to use part of the upstairs as a secret office to headquarter Burma’s fight for independence.

When a hankering for sushi struck, a meal at the stylish Gekko Restaurant on the lobby level of the historic Sofaer Building fit the bill. In the early 20th century, Baghdad-born, Burmese-educated, Jewish brothers Isaac and Meyer Sofaer continued their many commercial successes in the building. The food is tasty, the atmosphere is cool and the hip sip while people watching is nearly an art form.

The culinary piece-de-resistance in Yangon was the tasting menu at The Strand Restaurant prepared by Executive Chef Christian Martena.  The mouthwatering extravaganza started with grilled scallops served on mouthwatering truffle ‘sand’ and paired with champagne. Next up, a pan-fried foie gras served with morel mushrooms on a bed of house made truffle potato mousse and topped with a duck consommé. This dish was perfectly paired with a light Chardonnay and was so flavorful it nearly had me squealing in delight. The apex was Wagyu beef that melted in my mouth and was paired with a Cote-du-Rhone. Ending the meal, a chocolate tiramisu “ball” with espresso sauce derided any delusions of dietary diligence. It was a meal fit for royalty in an Uber-chic setting.

Central Yangon is best seen on foot where remnants of its colonial past are everywhere, especially in the beautiful architecture of the High Court, the Currency Department, City Hall and Sofaer Building. However, one must consciously watch one’s feet as there are many large potholes and uneven sidewalks. There are Tea Houses on most blocks serving light snacks to refresh and take cover during brief rain showers. A few minutes walk away is the Independence Monument – resembling a mini Washington Monument – and the octagonal, gold-gilded 2,000-year-old Sule Pagoda, where legend has it, a strand of Buddha’s hair is enshrined.

Down a side street near the Indian Spice Market is the Yangon Heritage Trust listed Musmeah Yeshua Synagogue. Built in the 1890s, it has been magnificently maintained by the Samuels’ family – Sephardic Jews originally from Baghdad who arrived in Yangon in the 1850s. Before World War II, Yangon’s Jews numbered 2,500. Today there are just 20 Burmese Jews and about 100 resident Jewish expatriates. In addition to the blue-and-white Star of David ceiling motif and the two remaining silver-cased Torah scrolls on display are excellent black and white photographs depicting the importance of Jews in Yangon as well as the close ties between Burma and Israel, which also gained independence in 1948.

Yangon’s famous Shwedagon Pagoda – best seen after 4pm when the reflecting, shifting light is utterly ethereal – is one of Buddhism’s most sacred sites. Originally built between the 6th and 10th century, it has been rebuilt several times. The stupa, covered with 27-metric tons of gold leaf, diamonds and other gems is believed to house eight hairs of Gautama Buddha and relics of three former Buddhas. Near the main terrace is a small museum housing close-up photographs of the jewels that encrust the stupa’s top.

To get a taste of rural Burmese life, a 10-minute ferry ride from central Yangon brought me to Dalah, where village life remains virtually unchanged by modernity. Hopping onto a trishaw for a 90-minute ride on narrow lanes throughout the area, I stopped at Dalah’s pagoda, a workshop where young men brave intense heat to make mountains of spring roll casings to sell to Yangon restaurants, a traditional candle making workshop, Dalah’s open market full of fresh produce, flowers and spices, and Chuchu, a small recycling shop selling colorful bags and trinkets made by local women out of scrap coffee wrappers and tires.

Another opportunity to see Yangon life up close is the Circular Train. The full circle is three hours but the most important aspects can be seen in 30 minutes starting at Yangon’s central station. On board hawkers sell everything from water to apple bushels. Exiting at Hledan, I strolled surrounding streets and small shops popular among Burmese university students. 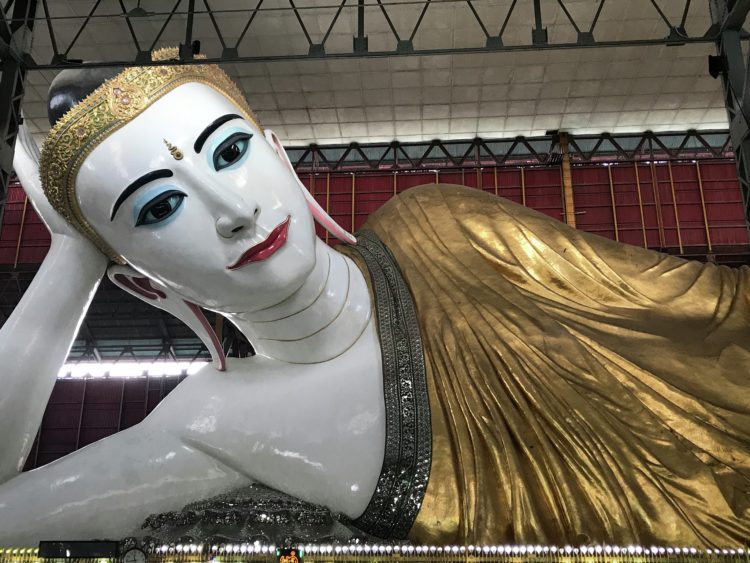 Though Yangon has several significant challenges ahead as it recovers from 50 years of military rule, it’s a historic and interesting city with much to see and experience. With the genuine hospitality and kindness for which the Burmese are famous, a few days in Yangon and environs will be unforgettable.

All logistics, English-speaking guide and air-conditioned transportation were arranged by Pandaw Cruises, which also provides seven-night luxury river cruises on Burma’s Irrawaddy and elsewhere in Asia.