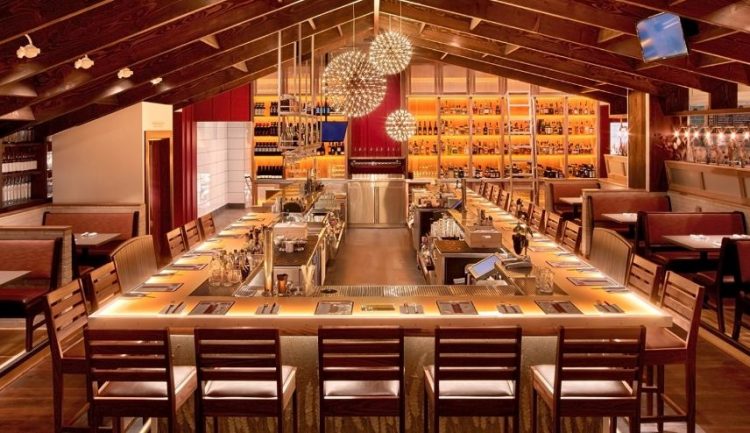 When Alice Waters open the now world famous Chez Panisse restaurant in Berkeley, California in the early 1970s, it was a risky move. At that point in time, restaurants aimed to serve good food, and there wasn’t much focus on where that food was from, how it was raised, or how eating it might impact the planet.

Now, of course, these are things that many of us care deeply about. We’re extremely wary of, as author James Howard Kunstler has called it, the 3000 mile Caesar salad. We want our food sourced locally and raised sustainably. Sure, we want it to be delicious, but we’ve come to understand that local food that’s raised with organic methods with minimal disruption to the environment often tastes better than factory farmed meats and produce sprayed down with lots of pesticides.

To that end, restaurants that employ this green philosophy have become increasingly popular in the last few years. Not only is Chez Panisse still going strong after more than four decades in business, but an impressive number of new restaurants have sprung up throughout the United States, all with the same approach as the one Waters takes. The food is from local growers, and there’s great care in how it’s raised, resulting in plates that really shine — and customers who are willing to pay a premium for it. If you’re interested in a dining experience that’s organic and sustainable, read on: here are the top ten green restaurants in the US.

It’s the perfect name for a green restaurant located in our nation’s capital, and it’s been so popular that Founding Farmers outposts have opened in nearby Potomac, Maryland and Tysons, Virginia. Even though the restaurants are located in the capital region, they’re actually part of the North Dakota Farmers Union, a group that was looking for a way to offer their farm raised food directly to consumers. In the restaurants, you’ll find everything from burgers and sandwiches to cuts of steak to handmade pastas and even vegetarian options. The drinks are also hand crafted, so don’t forget to look at the cocktail list.

Minneapolis may not be the first city you think of when it comes to green dining, but Red Stag Supperclub has more or less put that notion to bed. The focus is on nose to tail cooking, sustainable agriculture, and good business practices, and it all translates to an elevated culinary experience. Stop in for dinner, and you’ll have a choice of classic American fare made even better thanks to its prime ingredients. Fridays are a favorite thanks to the fish fry special. In addition to the focus on good food, Red Stag Supperclub was the first LEED-CI registered project in the state of Minnesota.

Just north of New York City is the Stone Barns Center, a working farm and educational center, and Blue Hill is its on site restaurant. If you’re looking for a menu, you’ll be disappointed: there isn’t one. Instead, seasonal tasting menus are offered, so guests eat nothing but what’s fresh and delicious. The prices are steep, even by New York standards, so it’s not the place to go if you’re on a budget. However, if you’re willing to pay a premium for some of the finest green dining in the country, Blue Hill at Stone Barns is not to be missed.

San Francisco has always been on the cutting edge of culinary innovation, and Bar Agricole is one of the latest restaurants to carry on that proud tradition. The food is local and organically grown, with the focus on great produce, California raised meats and cheeses, and simple preparations that make each ingredient the absolute best it can be. Careful attention is given to the drinks as well; the spirits are small batch, the cocktails are inspired, and the wines are all produced by wineries committed to the same ideals as the restaurant.

When your head chef is a James Beard Award winner for Best Chef of the Northwest, you know you’ve got a stellar eatery. Seattle’s Tilth is known for it’s unpretentious yet meticulous focus on organic and wild ingredients, time honored preparations, and unusual combinations that just work. Head chef and owner Maria Hines offers an a la carte menu plus tasting menus for omnivores, vegetarians, vegans, and those who would prefer to avoid gluten. Careful attention is also given to the drinks menu, and many wines from the Northwest are offered.

Jean-Georges Vongerichten is one of the most respected chefs in the world, and with ABC Kitchen, he turns that respect back to the earth. This New York City restaurant offers food made from ingredients that are seasonal, sustainable, fair trade, and sourced as locally as possible. In fact, herbs and greens used in preparations are grown upstairs in a rooftop garden. On the menu, you’ll find everything from fresh pasta and homemade pizzas to fish, poultry, and meats.

With two locations in Chicago, Uncommon Ground and its staff are committed to providing guests with the best possible farm to table experience. The menu is a pretty far deviation from the average Chicago steakhouse or deep dish joint; instead, you’ll find gorgeous salads, sandwiches with carefully thought out ingredients, and more, all locally sourced, of course. And if you like a good brew to go with your meal, you’ll be happy to know that the 100% organic Greenstar Brewing is part of the Uncommon Ground family.

Denver’s Root Down is so committed to giving guests a green dining experience that it has its own 4000 square foot garden, is powered entirely by wind energy, and serves animal products that are certified humane without exception. What’s more, the building itself was built with more than three quarters recycled or reclaimed materials. The green philosophy looms large, but happily, the food is also excellent. The menu features an impressive variety of fish, meat, poultry, and produce in creative preparations with loads of flavor.

Seafood is the standout of this green Los Angeles eatery, but not just any seafood. Everything served at Providence is wild caught and sustainable, so guests’ enjoyment does not have negative implications on our oceans. The menus are all tasting menus of various sizes, depending on budget and appetite, and feature delicacies like abalone, rockfish, sea urchin, and many other fish and shellfish in simple yet elegant preparations.

The Farm on Adderley

The Farm on Adderly is located in the Ditmas Park neighborhood of Brooklyn, a hipster haven and an ideal spot to open a green restaurant in New York City. While the majority of plates aren’t vegetarian, the real focus is on vegetables and herbs; steak, chicken, and fish play second fiddle to creative servings of squashes, greens, roots, and grains. It’s not health food, but it is environmentally friendly and thoroughly delicious.