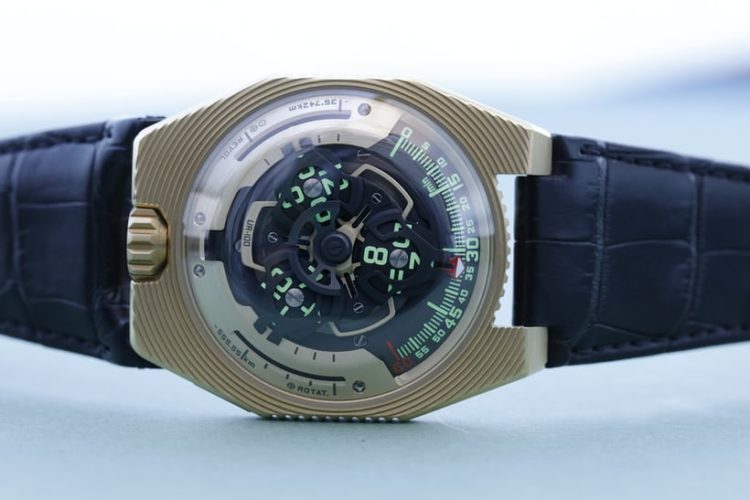 The news in horology news circles is abuzz with the announcement that URWERK is planning to release a new limited-edition wristwatch. The Swiss watchmaker is known for its exclusive luxury watches and innovative use of new materials to present unique and timeless pieces to add to its growing collections. URWERK’s newest wristwatch is the UR-100 Electrum. Those who are familiar with the meaning of Electrum will have an inkling that this is an important piece in the history of the brand that highlights its knack for the continual improvement of an established quality brand.

The URWERK Geneve specialists are known for serving up a new and innovative design feature that has not yet been seen elsewhere. They’re keeping that tradition alive and as of late they were busy crafting the latest example of URWERK excellence called the UR-100 Electrum, according to duPont Registry. A brief digression to share the history of the materials used in making this watch is necessary. URWERK has incorporated the use of an alloy of organic gold and palladium for the base materials. A mixture of gold and silver highlights the luxury components found based on the watch itself. These precious metals are symbolic of the original medium used to create some of ancient Greece and Egypt’s most prized treasures. The background is necessary to enjoy the full ambiance of this artistic piece. Here is where the modern age meets the old world. The UR-100 Electrum is a clever and artistic interpretation of what the combined nuances of each age would look like. The influence of Greek architecture, Egyptian treasures, and modern technology are melded together.

A closer look at the UR-100 Electrum by ERWERK

The first thing that you notice when you look at the UR-100 is the pattern of the case. It’s a bit unusual with a departure from the norm. A series of different shapes and designs give it personality. URWERK designed the case with a series of grooves on the top. This tactic serves to catch the eyes and draw the observer in for a closer inspection. The design is universal. It leaves itself open to interpretation of its more subtle meaning. It is reminiscent of the tiered setting arrangements of ancient Greek theaters. The case measures 41 mm in diameter in the 18kt 2N Electrum metal previously used to make the earliest coins, according to Hodinkee. We like this tie in that equates the materials of the watch with the notion of value and worth. The sides of the case and crown feature a ridging pattern that is also uncommon when combined. We’ve not seen many watch cases that feature such elaborate detail.

The grooved case serves as a teaser. It’s intended to pull the eyes in for an inspection of the initially confusing layout of the dial. It’s partially skeletonized to reveal an abstract concept for telling the time that takes us deep into the study of physics. It’s a nod to the philosophers and Frei’s conceptualization of the situation we face on Earth. Once you understand the concept of the watch’s theme, it’s easy to use. The satellite-type hours and minutes display is novel. The minute’s hand vanishes every sixty seconds and becomes a counter for the number of kilometers the Earth travels every 20 minutes. We get a good view of the inner workings of the mechanical movement through the dial. The basic concept is the Earth anchors us to precision in time and longitude while the nature of that position is temporal.

The UR-100 Electrum is powered by an in-house Caliber 12.01 movement that runs its two revolution counters and the three satellite time display. It’s a one-of-a-kind movement. The automatic movement offers a 48-hour power reserve. An exceptional view of the planetary turbine is observable through the transparent case back. There are engravings on the outer rim in the solid part of the case signifying it as a limited-edition piece. The brand hasn’t spent much time explaining the inner workings of its creation. We assume that there are a few secrets that URWERK isn’t ready to share.

The UR-100 Electrum offers a water-resistance rating of up to 30 meters. The watch affixes to the wrist via a large-scale black leather strap. The buckle matches the precious metal used for the case.

The limited-edition URWERK UR-100 Electrum is now available through authorized URWERK dealers, wherever supplies have not been exhausted. There is a strict limitation of just 25 pieces in this exquisite and exclusive collection. Low production numbers resulted in the UR-100 Electrum becoming a collectible piece at the time of its delivery. The price is $67,700 per piece.

We’ve come to depend on an announcement from URWERK to stir at least some degree of excitement. This sentiment is true among those loyal to the brand. It’s not the luxury watchmaker that appeals to everyone. There is a niche group of watch-lovers who can’t get enough of URWERK’s innovations in design concepts. For those with a wanderlust, a constant craving for something new and inspiring, the advent of a new twist on telling the time stimulates a sense of whimsy and wonder. The UR-100 Electrum conjures images of ancient philosophers discussing their theories. We can all but hear them point out concepts perceived as universal and applicable to all humans. It’s about inspiration. It’s also about the subtle meanings found in the artistry and the planning put into this piece. It’s necessary to understand these concepts or else the design is wasted and holds little meaning. We love the vanishing hand and the linkage of time and longitude with the implication that the Earth is temporal, and time is but a moment in the continuum we mark as a placeholder as we make our journey forward.