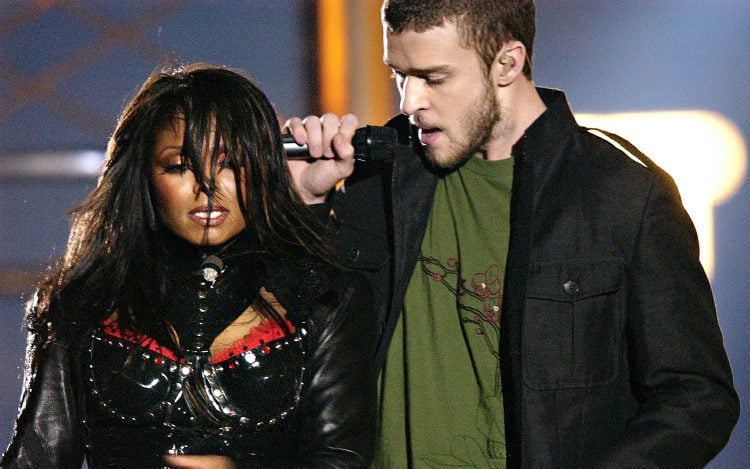 With one quick Google search, it’s possible to uncover a treasure trove of celebrity wardrobe malfunctions.  Depending on what search term you put in (and there are plenty we won’t list here) you’ll be treated to the latest and greatest clothing mishaps of your favorite celebs. We truly live in an age of exposure.  Our idols are no longer mysterious, untouchable entities. They are fully accessible commodities; dressed, primped, and preened for the entertainment of a baying crowd. Every tiny mistake is photographed, printed, and dissected. Every vulnerable moment now lives forever in some dark corner of the internet.

However, even she wasn’t prepared for the backlash that occurred after her body was exposed during a Superbowl XXXVIII performance. The subsequent controversy was huge. The FCC regulatory body described the incident as a ‘breach of common decency’ and sued CBS (the channel broadcasting the show) for a hefty $550,000. For weeks and months, the ill-fated “slip” was replayed, over and over, on news channels and entertainment shows and in gossip magazines and newspapers.

It has now been ten years since Justin Timberlake (yes, he was there) accidentally revealed what was, in actual fact, not much at all. While he managed to escape pretty much all blame and culpability for the incident, Janet Jackson was roundly savaged by the media. According to some sources, her career never recovered. Yet, we all still know her name. Whether synonymous with the incident or not, her musical legacy is still very highly regarded.

The most famous popstar on the planet, Beyonce, is imitating her style with the Formation world tour.  Jackson is happily married and just announced news of her first pregnancy, at the age of 50. She’s even released a new track, which critics are falling over themselves to praise. So, the question that must be asked is, did that ‘disastrous’ Superbowl wardrobe malfunction really do any damage at all? Could it be that Janet Jackson and her “assets” were laughing all the way to the bank?

It’s an interesting idea and one that has become increasingly relevant. Ten years ago, the wardrobe malfunction was something that happened on a small scale. It was a ‘blink and you’ll miss it’ moment that didn’t mean much, because it didn’t sell newspapers. After the Superbowl, public nudity became a way to expose celebrities. For most people, the thought of being photographed semi-naked in public is terrifying. It must be avoided at all costs, because such a mistake can be used as evidence of all sorts of things.

The Cat and Mouse Games of the Media

‘Look at her, she’s forgotten to wear underwear.’ ‘Look, she can’t get out of a car like a lady.’ ‘Look, she’s letting her top pop out of her dress. She must be drunk to care.’ The problem for celebrities is that it then becomes a game for the media. It’s a challenge between the paparazzi trying to sneak a peek and the stars trying to keep things under wraps. The inevitability of a wardrobe malfunction is assured, even for the most well turned out of celebrities, because they’re just fallible human beings.

The only feasible way to take back control is to be in charge of how, where, why, and when it happens. This is something that world famous stars – from Paris Hilton to Madonna, Kim, Kardashian, Rihanna, and Lindsay Lohan – are acutely aware of these days. In fact, there are now so many celebrity slip ups that it’s hard to believe a large proportion aren’t intentional. Every time Rihanna, for example, steps out in a sheer shirt that just so happens to disappear when photographed, her image appears on millions of gossip sites all around the world.

When Paris Hilton, queen of the ‘accidental exposure’ flashes her underwear in a teeny tiny skirt, she’s suddenly back in the headlines, after a long time without any media attention at all. So, perhaps it is a little naïve to assume that all high profile wardrobe malfunctions seek to victimize or shame celebrities. Certainly, if many stars are ‘in on the deal,’ as it were, the implications for society and our consumption of disposable culture are very interesting indeed. Even though Janet Jackson and her Superbowl mishap effectively gave birth to the ‘wardrobe malfunction,’ even this incident has been treated with suspicion.

A New Age of Creative Control

There were just as many viewers heaping cynicism on the scandal as there were critics rushing to denounce Jackson. As many pointed out, the Superbowl broadcast is never broadcast 100% live. It is shown with a delay, so that things like cursing and accidental nudity can be avoided. There were others who wondered why Timberlake and Jackson didn’t look more surprised when he ‘unintentionally’ tore off part of her bra. Or, why she was wearing a truly odd shield (which covered most of everything) over the exposed body part?

Contrary to popular belief, it is highly unlikely that Janet Jackson did any lasting damage to her career that night. The exposure put her on the front of every newspaper in the country. There have been many forgettable Superbowl performances, but hers will never be one of them. And, arguably, the moment that made the world gasp gave birth to a brand new form of culture. It’s a way of living, exposing, and consuming that is very troubling in many regards.

It represents the commodification of the body, so that nothing remains private for female celebrities anymore; not even a personal physicality. Yet, there’s a curious triumph in knowing that they can wrest back control of this process. By taking charge of how and when their wardrobe malfunctions occur, these media savvy ladies can turn the tables on an audience which only thinks it has the upper hand.