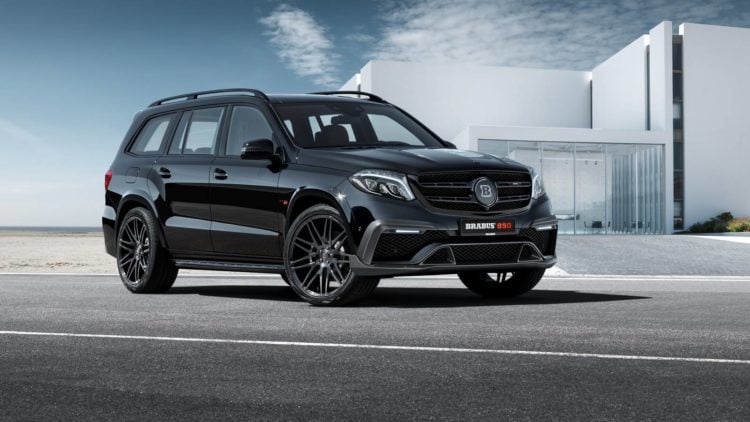 Currently, Mercedes-Benz is developing a new generation model of full-size SUV GLS. There will be an AMG high-performance variant of the new model and the planned name for this is the GLS63. This is exciting news for fans of Mercedes Benz who desire a high-performance SUV.

Shots of the new car have been revealed and it is clear that the snaps show the AMG variant as many of the features are the same as the AMG variants of the G63 and the GT four-door coupe. For example, it has a Panamericana grille design that protrudes from the main body of the car. Images of the prototype also show that the new design has wide rubber, massive brakes and more front fascia intakes than the regular GLS.

At the moment, the prototype shares the same exhaust tips as the GLS. However, it is possible that this is something that will change as the development of the design advances. Buyers can expect the AMG version to have a set of quad tips that have a more squared off design than those on the original GLS.

Although specific details of the engine have not been revealed, there are many features that the car will likely possess if similar models are used as an indication. It is likely that the car will boast a 4.0-liter twin-turbocharged V-8 engine. Potentially, the car will also have an all-wheel-drive system that is paired with a 9-speed automatic.

According to Mercedes-Benz, the Mercedes-AMG GLS63 is a reflection of their philosophy of combining distinctive designs with power and driving performance. They have described the model as being distinctive and boasting impressive dimensions.

The designers of the Mercedes-AMG GLS63 have spent a lot of time focusing on the finishing details of the car. For example, the wheel arches have been made 44 millimeters wider to create a broader stance and the car’s aerodynamics have been improved by adding flics. The aesthetics of the car have also been a focus and this is clear from the appearance of the matte iridium silver twin louver radiator grille that features AMG lettering.

Like all Mercedes-Benz cars, the interior of this model has a sense of luxury that enhances the driving experience and separates the driver from the outside world. The interior is often one of the reasons why people choose a Mercedes over another make of car. Many aspects of the interior are leather, including the steering wheel although the shift paddle is crafted from aluminum.

Of course, there are many aspects of this car that buyers can personalize to suit their own taste as a variety of options are available. These include a choice of nine colors and the option to have red calipers added to the high-performance braking system. The wheels are another element of the car that it is possible to personalize. They are available in either 21 or 22-inch designs, either cross-spoke or multi-spoke, and an option for titanium gray or black finishes.

If these various features sound appealing to you, there is still a while to wait yet before this car is available to purchase. Unfortunately, the GLS is not planned for release until 2019 as a 2020 model. It may be a little longer until the AMG63 version is available and Mercedes-Benz will continue to develop this model until then.

Once it is released, it will have some potential rivals as there are other car manufacturers releasing cars that are aimed at the same target market. These rivals may include the Lexus LX 570, the Cadillac Escalade, the BMW X7, the Infiniti QX80, and the Lincoln Navigator.

In an attempt to outdo their rivals, Mercedes-Benz has plans in place to further develop the AMG63. Further down the road, it is possible that this car manufacturer will launch a GLS73 EQ Power+ hybrid model. There are also rumors that they are currently working on an ultra-luxury variant of the Maybach. However, Mercedes-Benz has yet to confirm whether this is the case.