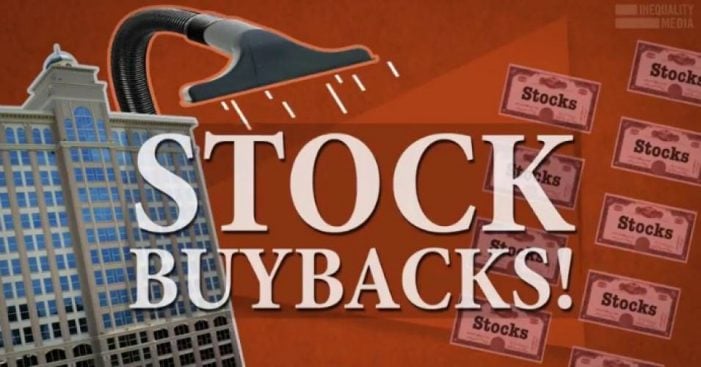 Stock buybacks have mixed response with some claiming they are an enemy of progress and other companies holding on to this tactic. Apple, for instance, has been buying back shares of its stock to offer shareholder value and boost the share price. Consequently, Apple’ shares gained 46% in 2017 and it recorded a revenue of $52.6 billion and EPS of $2.07, in the last quarter of 2017 Maybe it is the progress that other firms have seen in those that have resolved in share buybacks, that has prompted companies in the U.S to announce that they will be buying more than 1$ trillion of their stock. However, such a move has not gone well with some politicians.

Senators Bernie Sanders and Charles Schumer are not happy with such a declaration and are therefore pushing for legislation that will only allow companies to repurchase their stock if they satisfy a list of criteria proving they are treating their employees fairly. The politicians claim the share buyback is an enemy of the American worker and promotes economic inequality. Such opinions beg the question, are stock buybacks always a bad thing? Let’s find out.

There are many ways of measuring the success of a company’s shares, and one of the most effective ones is Earnings per Share (EPS). EPS is the amount of amount of profit each outstanding share of the common stock earns. By going for the share buybacks, a firm will reduce the assets indicated in the balance sheet and the returns on the assets will consequently go up to the delight of shareholders. If the company can maintain the same level of profitability and have its number of outstanding shares go down, then the EPS will increase. Shareholders who opt to retain their shareholding capacity will in return have a higher ownership percentage of the company’s shares, and the price per share will increase.

A company that is resolving to repurchase its stock signals to the shareholders that they have excess cash in hand; therefore the chances of having cash flow problems are minimal if any. Besides, shareholders feel valued because the company decides to reimburse its shareholders instead of investing in other assets. Consequently, the price of the stock improves and the shareholders get long-term security.

With all these upsides for share buybacks, it is evident why most firms are choosing to repurchase their stock. After all, there have been successful firms who went the share buyback way, such as Travelers Insurance that has been buying back its shares since 2005 and by 2014, its EPS increased by more than 250% and earnings increased by almost 80%. Still, we cannot ignore that some firms have had a bumpy ride since repurchasing their stock, with General Electric being the ideal example. After deciding to buy back its shares in 2016, spending $21.4 billion in the process, General Electric has had cash flow problems and has gone as far as laying off some its employees and selling other businesses it had had for quite some time. Therefore, share buybacks are not always a bad thing depending on the circumstances of a firm; Travelers Insurance and Apple Inc. have proven it.