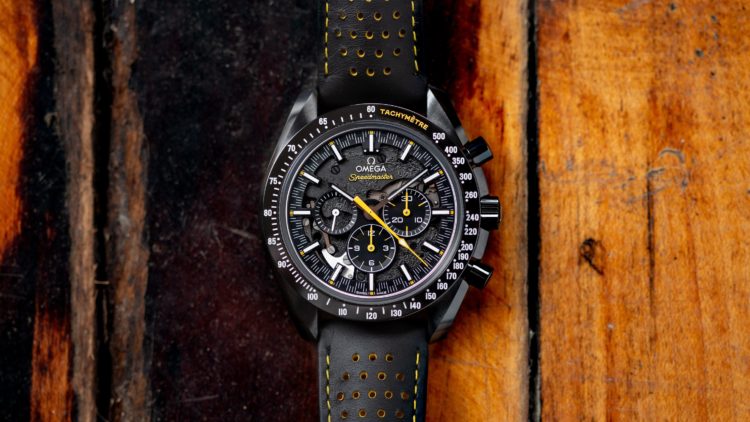 Omega has created a special hybrid wrist watch that gives a friendly nod to Pink Floyd’s “The Dark Side of The Moon” album released in 1973 which in turn paid tribute to the Apollo 8 mission to the moon that took place just five years prior. The Speedmaster bearing the name Moonwatch Apollo 8 Dark Side of The Moon has a name that says it all. On the 50th Anniversary of the first time we saw the dark side of the Moon, we take a closer look at Omega’s Apollo 8 Speedmaster. The aesthetic of this watch portrays a highly technical timepiece that makes a statement that invites us all to take a much closer look at its intricacies.

The case is made of full-ceramic material in a black color that bears a slightly brushed texture that is barely discerned with an attentive gaze. It’s crafted in a large 44.25 mm diameter case with a comfortable thin on the wrist thickness of 12 mm and a measurement of 49 mm from lug to lug. You’re in for an unexpected and very special treat when you turn the watch around and view the case back. It features a sapphire crystal glass that exposes a partially skeletonized view of the inner workings of the chronograph.

The bezel is full-ceramic with a matte black finish. The white lumed tachymeter scale is busy and gives it a highly technical appeal. It is inset with a thin raised inner ring that separates the bezel from the flat sapphire crystal that cuts down on glare and gives you a crystal clear view of the dial. The dial is the most prominent attraction of the watch. The exquisite finishing of the case along with the texturing and stylistic use of minimalist colors give it a subtle appeal hat combines both form and function. Intense contrast with remarkable detail take the place of a solid dial and in its stead, portions of the magnificent movement are visible, but you only get a peek from the frontal view. The real treat happens when you flip the watch over. Upon closer inspection we can see a variety of black colors, textures and the subtle use of yellow color which lends a tremendous contrast. The dial is transformed into the lunar surface with the running seconds hands hovering over the top and the visible elements of the movement working beneath. The majority of the yellow colors are applied to elements of the chronograph and a laser illustration of the surface of the moon and a partial display of the chronograph movement complete the magnificence of the dial.

The Omega used their hand-wound Calibre 1861 chronograph movement. The bridges are finished to match the dial with a combination of purple jewels, dark textures, metal wheels and cams and various bright work. The previous edition upon which this is based featured an automatic Calibre 9300. The new watch brings a melding of the past with the present in this unique and timeless hybrid that is destined to become a classic.

The Omega Speedmaster Moonwatch Apollo 8 is a very special watch indeed. It’s a unique re imagination of the former Moonwatch from yesteryear that is redesigned with modern features that maintain a vintage personality. It’s offered for a list price of $9,750 which is a real bargain when you consider that the original sold for $12,000. The decision to power it was a less expensive movement is what makes it possible to offer this timepiece for a more affordable cost. Finally, the latest version of the Omega Speedmaster Moonwatch Apollo 8 is available for purchase. It’s a salute to the astronauts and the team that made the Apollo 8 mission a possibility. The complications of this watch serve as a tip of the hat to the danger fraught mission that the brave astronauts undertook to help further our knowledge of space and the moon that orbits in a consistent path around our planet. With a hint of the past in a vintage style and a modern presentation any fan of the space program would be happy to own.