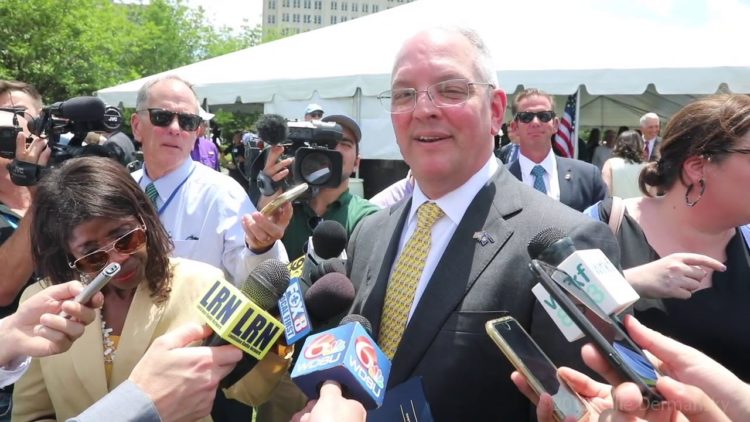 Many people are called to serve, but, It’s not often that you get to see a devoted leader. John Bel Edwards leads the pack of leaders who stand for good. The governor for Louisiana has a lot of experience when it comes to politics, and from his tenure’s achievements, it seems that Louisiana made the right decisions. Edwards has brought a substantial amount of change to the Louisiana state and with the current COVID 19 pandemic looming over the world, the governor seems steadfast in protecting his people from the virus.

Who Is John Bel Edwards?

John Bel Edwards was born to Dora Jean and Frank M Edwards Jr who was a sheriff in Tangipahoa Parish on September 16, 1966, in Amite Louisiana. Edwards attended the Amite High School where he graduated in 1984 as valedictorian.

Edwards ran for a slot in the Louisiana House of Representatives in 2007. During that election, he got forced into a run-off with George Tucker who was also an attorney. Edwards got elected unanimously winning every parish in that district. In 2011, Edwards defeated opponent Johnny Duncan and got re-elected to the Louisiana House of Representatives. Edwards announced his gubernatorial aspirations in February 2013 stating that Louisiana needed a new wave of common sense and compassion for the ordinary man. Edwards won the general election run-off election with 56.1 percent of votes making him the governor for Louisiana.

According to Wikipedia, after Edwards graduated top of his class in high school, he went ahead to obtain an engineering degree from the United States Military Academy in 1988. He completed Airborne School while still a student at West Point in 1986. In 1988, he completed the Infantry Officer Basic Course, and in 1992, finished the Infantry Officer Advanced Course. Edwards served for eight years in the army and was mainly positioned on the 25th Infantry Division and the 82nd Airborne Division. Edwards’ military career, however, got cut short due to family obligations, but his education was far from over. In 1999, he earned a JD degree from the Louisiana State University Paul M Herbert Law Centre and worked with the Edwards & Associates law firm in his hometown in Amite.

2. His Chairmanship Tenures Were One Of A Kind

When Edwards secured a seat at the Louisiana House of Representatives, he got selected as chair of a committee in the legislature. This fete made him the only freshman in the committee. Edwards also got appointed as the chair of the democratic house. This appointment was also a rarity for a freshman legislator, thus helping to solidify his presence in the house.

3. Edwards Is Not Afraid To Call Anyone Out

While still a member of the House of Representatives, Edwards became known for his outward criticism of the then governor of Louisiana, governor Bobby Jindal. Edwards called out Jindal for his extravagant lifestyle, including travelling to other states to raise funds for his campaign, while Louisiana was focusing on reducing funds for higher education.

4. He is a Strong Advocate for Human Rights

While his predecessor Jindal was in office, there had been a rule that protected businesses which opposed same-sex marriages. The order protected these businesses from getting legal punishment for discriminating same-sex couples. In 2016, Edwards signed an order to protect the LGBTQ+ community from harassment or wrongful job dismissals based on their sexuality. Edwards stated that he believed in providing equal opportunity to the constituents in Louisiana and wasn’t for discrimination of the pride community based on their sexual orientation or people’s religious Beliefs.

5. His First Act As Governor Included Pardoning Some Prisoners

In line with his campaign to reduce the ever-growing prison population in Louisiana, the governor’s first action in office was to pardon 22 out of 56 prisoners. The state’s Board of Pardons had identified the well-behaved prisoners for the governor, all of whom got acquitted.

In 2018, Edwards signed a bill that banned abortion after 15 weeks of pregnancy. This law was in a bid to fasten his Beliefs on being pro-life and being anti-abortion. He has been known to strongly condemn abortion practices.

7. He Comes From a Family of Law Enforcers

As mentioned above, his father was the Tangipahoa sheriff while his brother Frank Milliard Edwards is the Independence, Louisiana Chief of police. His brother-in-law, Blair Downing Edwards, is a judicial district court juvenile judge. Therefore, Edwards must have derived his passion for law and politics from his family.

8. One Of His Staffers Died From Coronavirus

According to CBS News, April Dunn, who was a staffer at the governor’s office, died recently from the novel Coronavirus. Edwards stated that Dunn was a sweet lady and was essential to his team. He expressed his heartfelt condolences towards her family.

While the Coronavirus pandemic was still not as significant as it is today, governor Edwards gave the go-ahead for the festival to continue as planned. However, according to The News Star, this eventually led to the first case of COVID 19 being reported in the state.

10. He Is A Staunch Catholic

Edwards is a firm Believer of the Roman Catholic and is also a parishioner of the St Helena Catholic Church in Amite Louisiana. He has been spotted several times attending church at Christ the King parish on LSU Campus.

Governor Bel Edwards is one of those leaders who not only stand by what they preach but also walk their talk. He is hands-on and isn’t afraid to speak his mind. Throughout his tenure as governor of the state of Louisiana, he has been the epitome of change as he has done his best to lower the unemployment rate. The COVID 19 pandemic being a tough situation is one of the truest tests of the leader, and we can only wait to see how the governor handles the situation.