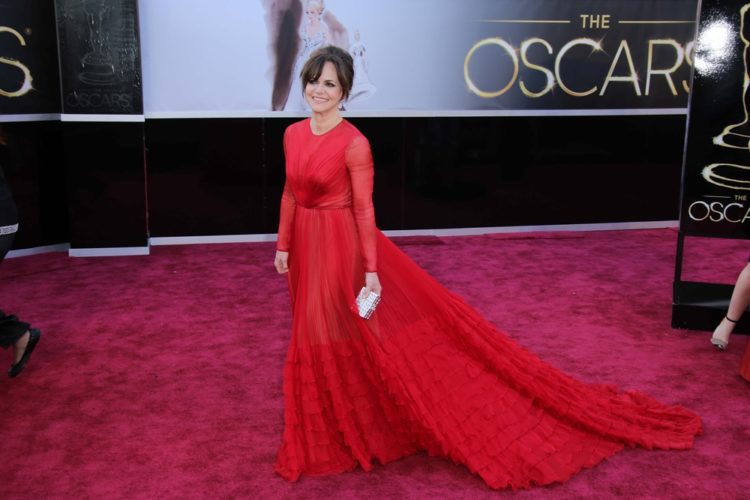 Sally Field is an actress and director who began her acting career in 1962. She is an award-winning actress who has had roles in both film and television. The actress has enjoyed huge success in her career, and it means she has become a wealthy woman. Due to her continued success, it is estimated that Sally Field’s net worth is $55 million, and here is how she accrued her wealth.

Sally Field was born in Pasadena, California, on November 6, 1946. Acting runs in her genes, as her mother, Margaret Field, was also an actress. When her parents divorced, Field’s mother married Jock Mahoney, an actor and stuntman. Field has alleged that Mahoney sexually abused her when she was a child. In her teens, Sally Field attended Birmingham High School in Van Nuys. Many of her classmates have gone on to have successful careers, including talent agent Michael Ovitz, actress Cindy Williams, and financier Michael Milken.

Although Sally Field began her career in 1962, she did not land her first main role on television until 1965 when she played a surfer girl in the sitcom ‘Gidget’ and played this role until 1966. The actress’ next job was playing Sister Bertrille in ‘The Flying Nun,’ and she appeared in this series from 1967 to 1970.

After playing Sister Bertrille, Sally Fields had some difficulty landing decent roles. Her first major role was in the television film ‘Maybe I’ll Come Home in the Spring.’ She then had small roles in series including ‘Alias Smith and Jones’ and ‘Night Gallery.’ Next, Field was cast in a starring role in the series ‘The Girl with Something Extra.’ A series in which she appeared from 1973 to 1974 when it was canceled. The actress then played the title role in the 1976 television film ‘Sybil,’ and she won an Emmy Award for her performance. At this point, Field’s career took a turn for the better, and she co-starred alongside Burt Reynolds, her boyfriend at the time, in the 1977 film ‘Smokey and the Bandit.’ Two years later, she established herself as a dramatic actress when she played the title role in ‘Norma Rae.’ Field won an Academy Award for her performance in this film. In 1978, Field starred alongside Burt Reynolds twice more in the films’ The End’ and ‘Hooper.’ They then starred opposite each other in the 1980 film ‘Smokey and the Bandit II.’

Field played a prostitute in the 1981 movie ‘Back Roads.’ Wanting to diversify as an actress and avoid typecasting, Field had roles in the 1981 drama film’ Absence of Malice’ and the 1982 comedy ‘Kiss Me Goodbye.’ Field received Oscar nominations for both films. The next film in which Field appeared was ‘Places in the Heart,’ for which she won her second Oscar. A year later, Sally Field co-starred alongside James Garner in ‘Murphy’s Romance.’ Her next major role was playing M’Lynn in the 1989 film ‘Steel Magnolias.’

During the early 1990s, Sally Field had roles in films including ‘Mrs. Doubtfire’, ‘Forrest Gump,’ ‘Not Without My Daughter,’ and ‘Soapdish.’ She played a grieving vigilante mother in ‘Eye for an Eye,’ for which she received a Berlinale Camera Award at the 46th Berlin International Film Festival. In the late 1990s, Sally Field guest-starred in several television series. Her next major film role was not until 2000, when she was in the films ‘Where the Heart Is’ and ‘Legally Blonde 2: Red, White, and Blue.’ In the same year, Field also landed a recurring role in the hit hospital drama series ‘ER’ and won an Emmy Award for this role. She later returned to the role in 2003 and 2006. Prior to her return, Field starred in the 2002 series ‘The Court.’ Field then played Nora Walker in the ABC series ‘Brother & Sisters.’ However, the role was originally given to Betty Buckle in 2006, but Field replaced the original actress in 2007 and won an Emmy Award the same year. Some of the films in which Field has appeared since 2010 include ‘The Amazing Spider-Man’ and its sequel, ‘Lincoln,’ and ‘Hello, My Name is Doris.’ Field also began appearing on stage during this decade.

Field’s Career as a Director

The first time Field worked as a director was on the television film ‘The Christmas Tree’ in 1996. Two years later, she directed one episode of the television miniseries ‘From the Earth to the Moon.’ In the same episode, Field played Trudy, a minor role. The most recent of Sally Field’s directorial projects was the 2000 feature film ‘Beautiful.’

According to The Richest, Sally Field’s net worth is now $55 million. She has predominantly made her money through her work as an actress. However, Field has also made money as a director. Despite now being her 70s, Sally Field continues to work as an actress, which means she has the potential to increase her net worth further.

Sally Field has been married twice and has three children. Her first husband was Steven Craig, who the actress married in 1968, and they had two sons together. Their first son, Peter Craig, is a novelist and screenwriter. Eli Craig, their second son, is an actor and director. Field and Craig separated in 1973 and finalized their divorce two years later. Field was in a serious relationship with actor Burt Reynolds between 1976 and 1980. During that time, the couple starred in four films together. After initially separating in 1980, Reynolds and Field continued to have an on-again-off-again relationship until they permanently separated in 1982. In 1984, Sally Field married her second husband, Alan Greisman. The couple had one son together, Sam, who was born in 1987. Unfortunately, the marriage failed, and the couple divorced in 1994.