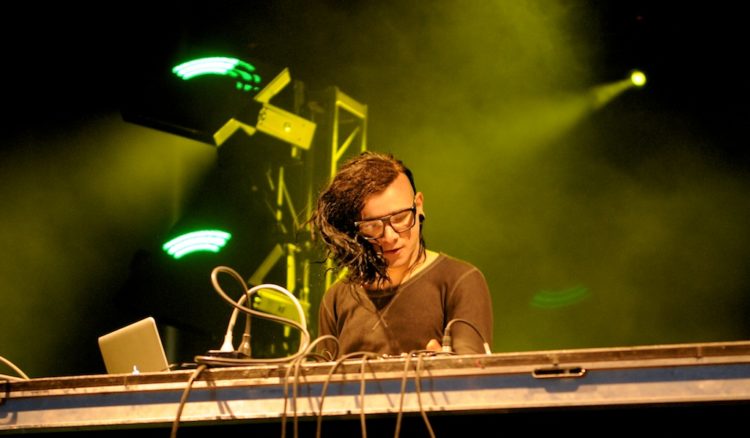 Skrillex is a world famous DJ and electronic music producer. He started out as a singer and his career has evolved over time and has diversified. He’s been tremendously successful in everything that he’s set his mind on doing. In fact, he’s done so well that his estimated net worth is $45 million. How did he make this large fortune? We looked into his life and career and this is what we found.

Skrillex was born Sonny Moore. He adopted Skrillex as his stage name later on in his career. He entered the entertainment industry in 2004. He joined a post hardcore band that went by the name of From First to Last. Moore was the lead singer for the band and together, they released two albums which achieved success. After this, he started out on his own career as a soloist. He had not yet changed his name at this time. In 2008, he embarked on a new professional venture as a dubstep producer. He showed up in a variety of different clubs throughout the Los Angeles area and he went by the name of Skrillex. He proved his skills as a talented DJ who gained popularity fast among the LA crowd.

His career as a DJ

Skrillex had amassed a crowd of followers who appreciated his unique DJ style. In June of 2010, his official debut EP was released under the title “My Name is Skrillex.” This was a great way to get his name out there in the public eye. It was initially released as a free download so the access and publicity was immense. While it didn’t make him a fortune, it certainly laid the groundwork for him to build a successful career upon. After the release and success of his EP, he continued moving forward in his career as a producer. He snagged a series of gigs and produced for the metal band Bring Me the Horizon as well as for deadmau5, Korn and others.

He experienced a setback

Skrillex had put together a new album that was to be released in the near future in 2011. Tragedy struck when he was staying at a hotel in Milan. While he was away from the room, his laptops containing the musical content were stolen. While this was a major loss and all of the information was gone, he took it in stride and carried on without making a big public fuss. He continued to produce for a variety of groups across multiple genres and he also toured with a few musical acts.

Skrillex’ first studio album release was titled “Recess” and was released in 2014. The album was a big success and went all the way to #3 in Canada and #4 in both Australia and the United States. He went on to release another album in 2015 called Skrillex and Diplo Present Jack U. He caught up with From First to Last again in 2013 and together, they released an album in 2015 titled “Dead Trees.” He went on to produce an album for Incubus called 8 in 2017. His earnings from 2016 were estimated at $20 million before taxes. He earned this amount from licensing and touring. Skrillex kept busy doing several different things in the music business.

Skrilled is a highly celebrated celebrity personality. He won Grammy Awards in 2012, 2013 and again in 2013. By the time that he was just 29 years old, he had to his credit eight Grammy Awards. The awards were in the category of electronic music and he set the record for being awarded with the highest number of Grammys in this category. He’s worked with a variety of famous musicians including The Doors, Fatman Scoop, Vic Mensa, Pusha T, Rick Ross, G Dragon, Diplo, 4Minute and many more.

How did he earn his fortune?

When we look back over Skrillex’ long and illustrious career in multiple phases of the music business, it’s not difficult to see how he earned his millions. He’s one of the most famous DJs in the business. In addition, he’s also a lead singer and an album producer. He’s a hard worker who has dedicated his life to his successful career and it’s served him well.