Home
Watches
A Closer Look at The Swatch Sistem51 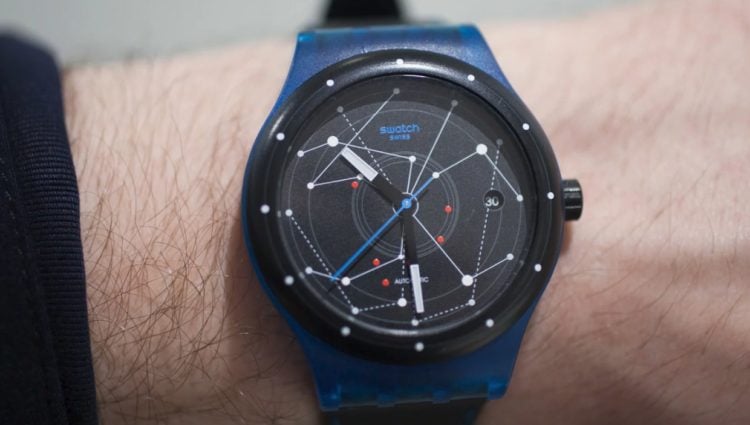 Swatch is responsible for one of the most exciting releases, the Sistem51. This watch is the first entirely automated assembly with mechanical movement. Only having 51 components, (hence the name) all are anchored to a central screw. In addition, this Swatch is one hundred percent Swiss made and has an unbelievable power reserve of ninety hours. Read on and take a closer look at the Swatch Sistem51.

First, let’s do a bit of back history. In 1983, Swatch decided to launch a project to mass produce Swiss watches, making them available for everyone. To this, the company reduced the number of components normally used for quartz movement from ninety-one to fifty-one, which would make it much more manageable. The enabled the Swatch’s production to become fully automated. This change, combined with Swatch’s commitment to pop culture, has led to the company becoming the watch giant we now know and love. They now sell millions of watches every year. Swatch began development of Sistem51 hoping to do what they did for quartz production back then for mechanical watch production today, and they succeeded. Let’s take a look at this amazing watch’s innovations. This watch’s entire movement is made from ARCAP. This material is an alloy of zinc, nickel, and copper and has anti-magnetic properties preventing the movement from ever needing an adjustment. Hermetically sealed in the case, the movement cannot be serviced later. However, this makes the movement immune to weather and other environmental conditions, making longevity easily accomplished. Because there will be no need for servicing, certain components weren’t needed, such as a regulator. Instead, it’s set with by laser during production, never needing to be reset again.

One of this watch’s greatest innovations, besides being assembled entirely my machine, it the architecture of the movement itself. All fifty-one components, which are centrally linked to one screw, require less lubrication, reducing wear and tear that would normally be seen over time. In addition, the Sistem51 automatically winds itself, featuring a peripheral bi-directional rotor, and even has a ninety-hour reserve of power. This Swatch allows you to see through the caseback making several of the movement components visible. Since these components are printable during production, both colorways and designs may be customized to fit the needs of the customer. Swatch compares this revolutionary watchmaking to the inspiration of the Copernican revolution. (Basically, this means the discovery of having the sun in the center of the universe with the planets orbiting around it.)

By now you may be thinking that this watch is going to be too much for your budget to afford, but that’s just not the case. In fact, the Sistem51 is very moderately priced between a hundred and two hundred CHF, which roughly equals about the same in USD. Swatch claims that the watch will more than likely remain on the lower end of this price spectrum, which was when it first hit the market in the last quarter of 2013. Looking over ads for the Sistem51 today shows that the price is still fairly within this same price spectrum, with some hovering right around the midpoint at a hundred and fifty dollars and some slightly over the out-dated pricing, at two hundred and twenty-five dollars.

The watch has a lightweight plastic case and, as most Swatch watches, also has the three-pronged rubber strap which has become a signature component. The Sistem51 sits on the wrist comfortably as well. Just to be sure, no one will mistake it for a high-end watch, but there is no denying that this is one super cool watch. Now it’s available in a variety of pre-chosen colors as well. The original had a funky inaugural dial along with a black and translucent blue color scheme. Many feel this is a watch that will be very popular among nerds.

Swatch has been a well-known brand of watches for several decades now and it’s still just as popular, maybe even more so. The Sistem51 is definitely very cool with neat components. The fact that it will never have to be serviced may go a long way in some deciding to purchase it. With the moderate pricing, some may even decide to order a few in different colors to coordinate with different outfits. Whatever the reason for the decision, the Swatch Sistem51 makes a unique statement. Get yourself one or gift one to a special friend or family member. It’s a watch that will last.