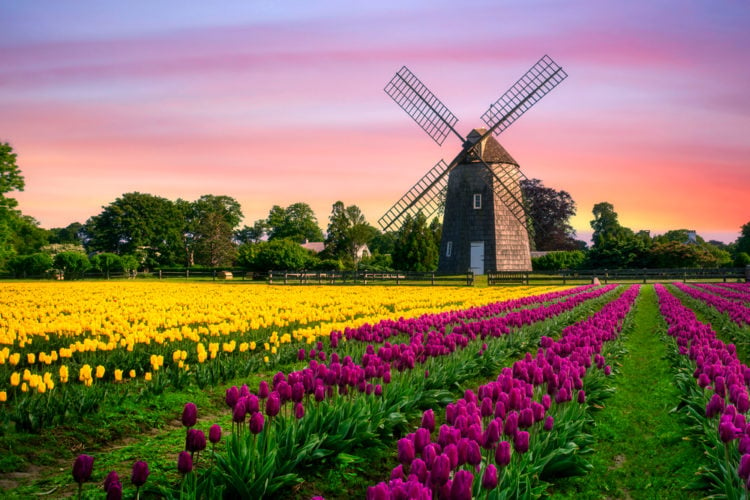 Tulips might have a short blooming season, but for the brief time they’re around, they’re glorious. They’re pretty enough in a vase, but nothing quite beats the sight of hundreds growing in a field. If you want to wander through fields of rainbow-colored blooms (and maybe even take a few stems home with you), skip googling ‘tulip farm near me’ and check out these 10 amazing tulip farms instead.

If you’re in the vicinity of Modesto, California, be sure to pay a visit to Dutch Hollow Farms. A family-owned venture with a mission to show “what good flowers, fruits, and vegetables can be grown in the Central Valley of California,” they do a little bit of everything, from sunflower meadows in summer to pumpkin patches and hayrides in fall. In spring, their fields burst with colorful tulips. There’s also a great farm shop where you can buy bouquets of freshly cut blooms to take away with you.

Massachusetts has only one u-pick tulip farm to its name. Fortunately, it’s good enough that you won’t mind the lack of variety. With two acres of fields boasting more than 200,000 tulips, it’s an idyllic place to spend a spring day. The farm is open from mid to late April.

Come spring, Holland, Michigan becomes tulip central. The entire town goes a little tulip crazy, but Veldheer’s Tulip Gardens is the main event. Boasting over five million tulips, not to mention a ton of other flowers as well, it’s a rainbow-colored delight. The best time to visit is May, when the Tulip Time Festival rolls into town for 8 days of fun, special events, activities, and more tulips than you can shake a stick at.

In 2009, New Englander Keriann married Jeroen Koeman. Jeroen hailed from a Dutch family of tulip growers and Keriann had a passion for all things horticultural. After combining their talents, they launched Wicked Tulips Flower Farm in Rhode Island. Each spring, they open their gates to thousands of visitors at one of the largest u-pick tulip events in the States. If you provide the bucket, they’ll provide the tulips – just be sure to bring some fresh water to keep the blooms happy on the drive home.

Located in Cream Ridge, New Jersey, Holland Ridge Farms U-Pick Tulips is one of the newest tulip farms around, but it’s already established itself as one of the best. It all started back in 2017, when the Jansen family decide to turn over several acres of their farm to a million tulip bulbs. Once the bulbs started flowering, visitors started pouring in in their droves. The farm now hosts an annual tulip festival that travelawaits.com considers to be among the top events of its kind in the US. You’ll need to purchase your ticket in advance, but with a bit of forward planning, you can look forward to plenty of farm fun, lots of tulips, and even the chance to take a few armfuls of blooms home with you.

In 1989. the Koeman family decided to get into farming. At the time, all they had was a spade, some onion seeds, and a bucket load of ambition. Over time, they expanded their crops to include irises, leeks, and chrysanthemums. By 2011, they’d outgrown their original premises and uprooted to Pilot Point in Texas. From that point forward, tulips became the name of the game. These days, Texas Tulips boasts 80 acres of tulips – if you want to wander the fields and pick some stems to take away with you, the farm is open to the public from the end of February through to the end of spring.

According to countryliving.com, VanderZanden farms began in 1979 with just one acre of tulips. Since then, it’s grown exponentially and now offers visitors the chance to experience several acres of beautiful blooms every spring. Even after the tulip season is over, it’s still worth a visit thanks to its gardens of gorgeously fragrant peonies.

Named as one of the most beautiful farms in the US by Only In Your State, the Tulip Farms in Washington are an absolute must-visit. The Dutch began planting bulbs in the area over a century ago, and it’s now the site of one of the biggest tulip festivals on the calendar. Held each year since 1984, the Skagit Valley Tulip Festival promises a heap of fun, with farm tours, scavenger hunts, flower bed design competitions, bulb planting seminars, bike rides, art shows, concerts, and, of course, acres and acres of tulips to enjoy.

Mount Vernon has two hugely impressive tulip farms to be bedazzled by. The first, as we’ve just seen, is the Tulip Farms. The second is the no less impressive RoozenGaarde. This huge garden covers more than 5 acres of farmland and boasts almost 1/2 million hand-planted bulbs from 150 varieties of tulips. If you still haven’t had your fill of flowers by the time you’ve finished wandering around the garden, there’s also a separate 25-acre tulip field and a 22-acre daffodil to check out. Before heading out, be sure to take a look at their bloom map to find out which fields are in bloom.

Wooden Shoe Tulip Farm in Oregon first opened its doors to the public during the Easter weekend of 1985, and it’s been pulling in the crowds every year since. From the end of March until the first week of May, guests are free to explore the farm’s 40 acres of tulips. On weekends, there’s even more fun to be had, with wooden shoe-making demonstrations, a children’s play area, and a tulip field train tour. There’s no bad time to visit, but if you want to make it especially memorable, plan on dropping by between the end of March and the end of April, when the farm hosts the annual Wooden Shoe Tulip Festival. Known as one of the top spring attractions in the entire state, it promises a ton of family-friendly fun, with hay wagon rides, picnics, tulip bed displays, cow wagons, a tulip market, workshops, and wine tasting at the Wooden Shoe Vineyards.