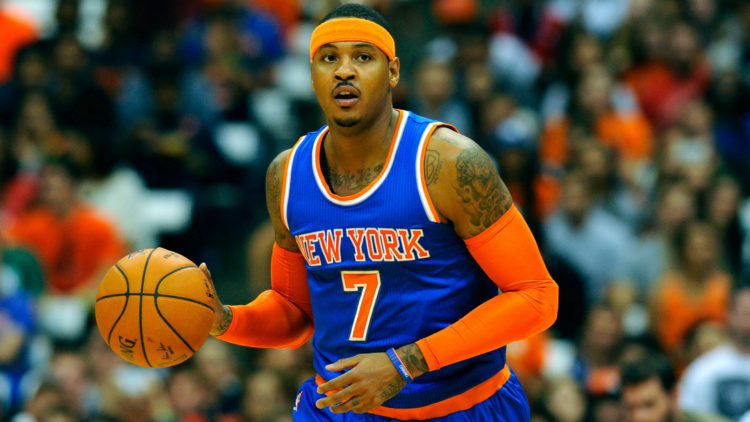 Carmelo Anthony played basketball for the New York Knicks and enjoyed a successful career in the NBA, making it to the status of All-Star, as well as a winner of the 2004 Olympic bronze medal and he took the gold in 2008 and 2012. The Brooklyn, New York Native took his talents at the sport of basketball to soaring levels, but he’s not limited to this career option. As it turns out, he’s also a skilled entrepreneur who has made some wise investments in the business arena, and he’s been successful in multiple endeavors, adding to his current net wealth. He’s achieved success in both professional basketball and in the business world, which is something that many NBA fans are not aware of. Here are a few highlights of his business career which also seems to have a bright future.

Carmelo co-founded a company called Melo7 Tech Partners, LLC. This company is an investment group within the early stage digital media industry. He is also a partner in the firm that helps to finance new consumer technology and internet venture companies. This partnership is with Stuart Goldfarb, and the two have also joined forces in other ventures, including Vice Sports Clubhouse, and Carmelo has also gone out on his own in some business deals. He bought a professional sports team called the Puerto Rico Football Club which is the only pro team in the nation, competing in NASL competition and he also has a Jordan signature shoe line. He’s also tried his hand at acting.

Anthony teamed up with Nickelodeon in 2016 to develop a “Teenage Mutant Ninja Turtles” product line under the licensure with the franchise. This was accomplished through his Melo7 company. The products were released just ahead of the new movie in the TMN franchise.

In addition to this he signed a six year contract with the Jordan shoes brand in 2003 which would pay him $3.5 million over the duration of the partnership. The first signature sneaker released under the partnership was the Jordan Carmelo 1.5 in 2004, followed by a total of 13 signature shoes within the Melo lineup. At the time he entered into the partnership with Jordan sneakers, he was just 19 years old and wore a size 15 in the sneaker. He served as the official spokesperson for the line that was sold under the Jordan M1.5 through 13. The 13 was the last edition of the line to be released before the contract between Carmelo and Jordan expired and it was not renewed, but the venture had earned him several million dollars within the life of the deal.

Carmelo Anthony made a number of television and film appearances. His acting career started in the early 2000s when he made a guest appearance in an episode of “Ned’s Declassified School Survival Guide,” followed by an appearance in the “Be” music video of Common’s. He also made several guest appearances in “Nurse Jackie” and in the movie “Amazing” in 2013, in “Sons of Anarchy” in 2014, and appearances in the “Teenage Mutant Ninja Turtles” film in 2016 and as a comic character in the 2012 television series “Amazing Adventures” which was a spinoff of the Chinese film he had previously appeared in titled “Amazing.” While his career as an actor didn’t take off the point of reaching superstardom he does have an impressive portfolio of appearances. His last television/film appearance as an actor was in 2016, and it was helpful in promoting his Nickelodeon products line. Fans who had followed his NBA career were thrilled to see him in a variety of television series and he gained further exposure to audiences who don’t necessarily follow sports.

He founded the Puerto Rico Football Club, which was an expansion of the North American Soccer League in 2015. This was a club that would turn a profit for him but making money from the venture wasn’t his only or his original intention. Anthony created the club to be a kind of community outreach. He invested a lot of time and money into the project and it turned out to be something that would pay well in the end, according to Wikipedia. Mr. Anthony seems to have an intuition about making solid investments regardless of the reason why he’s doing it. He’s built for himself an empire by following his heart in some cases, and sound business decisions in others.

A brilliant and successful entrepreneur

Carmelo has done a lot of things already in his lifetime. His career began as a guard in the National Basketball Association where his talent earned him several distinguishing awards, recognition and a handsome salary. He was already on his way to building a fortune before he hit the age of 20. As with many noteworthy pro-NBA players, he also accepted deals for endorsements that would further boost his net wealth while playing for the Knicks. He’s the kind of guy that seems to have a magical touch when it comes to making wise investments and business deals. He founded a pro soccer team in Puerto Rico and he’s recognized and respected for his athleticism as well as for his business acumen. He’s a philanthropist who began a venture by supporting the community, and even that activity ended up being a profitable enterprise. We were impressed with his track record as a pro athlete, as an Olympian and medalist and with the myriad of ventures he has embarked upon. Although like most celebrity personalities, he’s had his share of controversies, the positive things in his life far outweigh the negatives. Carmelo Anthony is a former star athlete and entrepreneur to keep your eyes on because he shows all the signs of achieving even greater things in the future.