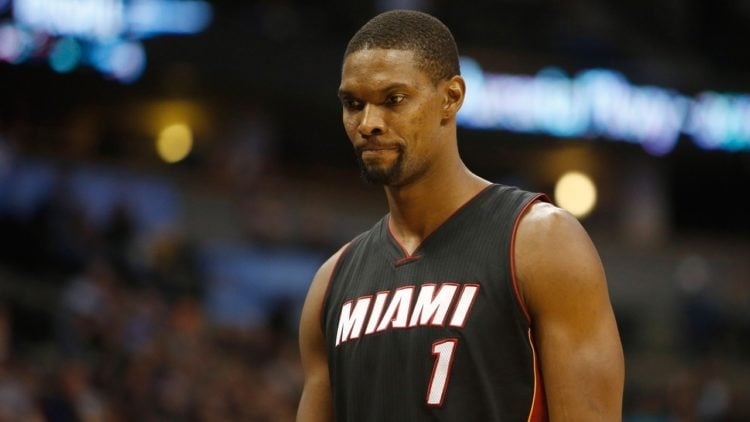 Retired Miami Heat NBA Champion and former Raptors superstar Chris Bosh didn’t expect that retirement was going to come so early. The 35-year old player suffered a series of blood clots in 2016 that eventually put him on the sidelines more than on the court. It was a serious matter that led to his early retirement. It shouldn’t be an issue, however, because we all know how much athletes like Bosh gets on every payday—a ton of money. Apart from a love of the game, many talented basketball athletes get attracted to play professionally because of the monetary gain. NBA superstars get millions in contracts, and if not millions, even the average players get at least a couple of hundred thousand dollars a year.

It was no different for Chris Bosh, whose base salary during his final season with the Heat amounted to over $23.5 million. That amount of money alone should be enough for anyone and their family to be set for life, but we all have to remember that professional athletes live a different kind of life. When you’re used to a certain kind of luxury, that lifestyle continues even though the cash flow doesn’t flow as much anymore.

Life after retirement for Bosh is good, for now. However, he has raised concerns about the coming future and whether he’s going to be prepared for it financially. To put it into perspective, Chris Bosh incredibly earned over $239 million dollars throughout the course of his 16-year career. We can’t say for sure how many of those millions he’s spent, but we can assume that he’s spent a good amount. Now that he’s retired, Bosh is thinking about what to do with his money. According to this article, he faces the dilemma of not knowing how to handle his millions.

It’s certainly a good problem to have, but it’s also a dangerous one to play with. We constantly hear about basketball players and other athletes draining their millions in earnings only after a few years into retirement. There are those that simply choose to squander what they have. But then there are those like Bosh, who simply don’t know how to handle their finances. Bosh isn’t any different from the average American, who doesn’t know how to handle the $50,000 he makes annually or the $200,000 coming in the bank. Bosh may be dealing with millions, but his problems are the same as everyone else’s.

When Bosh started his NBA career, he was only 22 years old. The kind of life you can afford as a 22-year old NBA star is blinding. Bosh admits to having made decisions then that he vowed never to repeat again. It’s the best way for Bosh to approach his finances considering he’s got a lot of mouths to feed at home. Bosh and his wife Adrienne have three kids together, and two of those are newborn twins. Bosh has an amazing family life that he needs to take care of. So it’s a great thing that the former Heat player is regularly meeting with his financial advisor, month after month, to talk about his money and finances. Considering that Bosh also got the remaining $52 million in his contract after he retired, he’s going to have to learn what he can do with that money for sustainment.

Fortunately, Bosh is not only a stellar basketball player; he also happens to be an extraordinary student. Bosh happens to have graduated with honors from his high school, Lincoln, where he became a member of the National Society of Black Engineers and the Dallas Association of Minority Engineers. He also attended Georgia Tech briefly before being drafted into the NBA. Bosh grew up in a home that was invested in learning computers, so he taught himself how to code. According to this article, Bosh is a big advocate of computer science and computer literacy. He goes to schools in order to encourage students to learn more about computers.

So we know that he’s smart, and he’s certainly smart enough to think about his future before it catches up to him. We know that dealing with finances can be burdensome, and we can only imagine what it must be like to have millions in finances to deal with. Sure, he can simply hire someone to take care of his finances for him. But that could easily be a mistake as well. Many athletes trust other people with their money, only to find that the people they’ve trusted are more interested in the money than anything else.

It’s a good thing that Bosh is choosing to tackle his finances head-on and by himself. There’s no one else he could trust better with his money than himself. Bosh claims that he could easily spend hours just combing through his finances, and that’s exactly the kind of intensity anyone should be putting into getting the money matters straight. We’d never want to hear anyone go bankrupt, especially someone that we admired so dearly in the game of basketball.

Bosh may have retired from basketball, but he’s still got game in other ways. The 35-year old still has a lot of years ahead of him. Since retirement, we’ve already seen Bosh pursue other ventures including his YouTube channel, appearances on television, and even hip-hop production. Whether Bosh pursues any of these full time is yet to be seen. For now, Bosh is spending a lot of his time with his volunteer and philanthropic efforts, and he’s just enjoying retirement with his family and with his wealth.