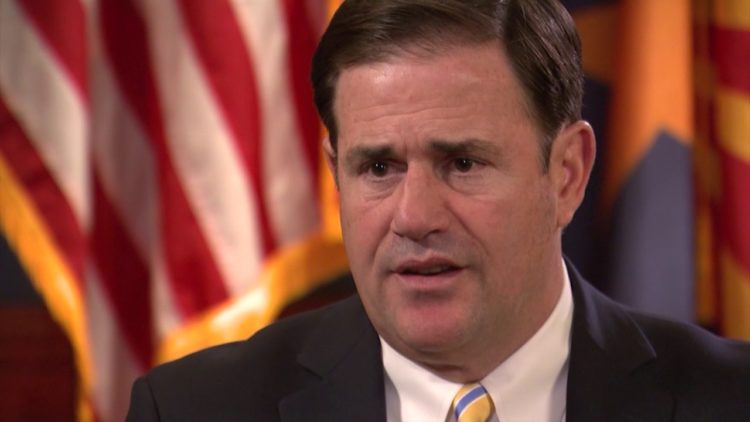 With all of the pandemonium surrounding the most recent COVID-19 outbreak, it’s no surprise that governors have come under scrutiny like they never have before. One governor that has stepped up to the plate more than most is Arizona’s Doug Ducey. With all the mounting pressure that has been coming on all levels of government, Ducey has been able to set himself apart as a leader. It’s important that we take a moment to look at the various accomplishments that Doug Ducey has had throughout his esteemed career. It is clear that he has talents that are going to be of the utmost importance in a crisis situation. Here are 10 things you didn’t know about Doug Ducey:

1. He graduated from Arizona State University

It seems that Ducey was already on a path to success right out of the gate. He graduated from Arizona State University in 1986 with a degree in finance. It wouldn’t be too long before Ducey started to make his impact felt in the corporate scene. He worked a variety of jobs and learned different aspects of business. All of this was critical to learning how to navigate tough and difficult periods. He has been preparing to handle various crises all his life.

2. He is a talented businessman

Ducey is no stranger to the business world. He has worked a variety of jobs all along the corporate chain, including everything all the way up to CEO. His talents have allowed him to land jobs in all places of the corporate ladder. He started off in sales upon graduating from Arizona State University. He quickly was able to prove himself to be a smart and capable businessman. This executive experience would come in handy during the COVID-19 crisis. He has already proven himself to be an effective operator under pressure.

3. He has used his experience to give back

Ducey has always been eager to help young up-and-coming entrepreneurs. In fact, he has given many different talks to aspiring entrepreneurs about what it takes to succeed in the corporate world. He calls upon his experiences as a CEO to show young people what it takes to succeed in business. It is clear that Ducey has well established himself a leader. This is exactly what is needed in a time of crisis. This is part of the reason that Arizona has been so lucky to have him during this time of need.

4. He learned how to manage at Proctor & Gamble

One of his first jobs coming out of school was at Proctor & Gamble. He started off in the sales department and slowly worked his way to management. Along the way he learned many aspects of the manufacturing process and helped to create some of P&G’s most innovative products. By the time Ducey was running the division, he had a hand in everything from baby powder to the creation of new kinds of foam pillows. Learning to manage the supply chain was critical for dealing with the COVID-19 crisis.

5. He is the former CEO of Cold Stone Creamery

Perhaps the pinnacle of Ducey’s business career was his position at Cold Stone Creamery. He assumed the position in 1995 and helped the company continue expansion until 2007. At this point is was determined that it would be best to sell the company. Ducey turned a nice profit on the sale and assumed a seat on company’s board, where he stayed until 2012. Under his tenure as CEO the company went from a fledgling ice cream shop to a franchising powerhouse that had accumulated more than 1,400 locations.

6. He was the 42nd treasurer of Arizona

After he decided to leave the private business sector, he decided that his next step would be into public life. He was elected as the Arizona state treasurer in 2010, overseeing more than 12 billion in assets for the state. His business and financial experience was critical during this time, allowing him to navigate budget deficits and other issues that the state was facing. It was also important to help him step into public life and gave him plenty of experience for when he was elected governor.

There was mounting pressure on Ducey to remove Confederate monuments in the wake of the Charlottesville protests of 2017. Though he issued statements of condemnation on hate groups, he did not think it was in the best interest of the public to remove the monuments. He was quoted as saying, “ It’s important that people know our history… I don’t think we should try to hide our history.” Ducey felt it was important that people not forget the past in order to build a better future.

8. He is a fan of small government

True to his Republican ideals, it seems that Ducey has governed in a way that shrinks government. He is well-known for firing people that he considers to be too excessive and claims that his ‘mandate’ is to shrink government. This is part of how he ran his entire campaign. The implication was that he would run the governorship like a well-oiled business. He is more than equipped to do this.

9. He is loved by Republicans

Ducey has gotten endorsements from some of the Right’s top brass. He is reportedly close to President Trump and communicates with him often on COVID-19 relief. He has also received praise from others in the Republican Party including Ted Cruz and Mike Lee. He is loved in the Republican Party for his decisive leadership and disdain for big government.

10. He is an avid volunteer and philanthropist

Ducey is more than willing to put others first. He has been well known to give his time and energy to various campaigns and charities in Arizona and elsewhere. He is known for giving his time to important causes such as the Entrepreneurs’ Organization and the American Diabetes Association. It is clear that Ducey cares about more than just politics. In fact, he is dedicated to improving the lives of every Arizonian.