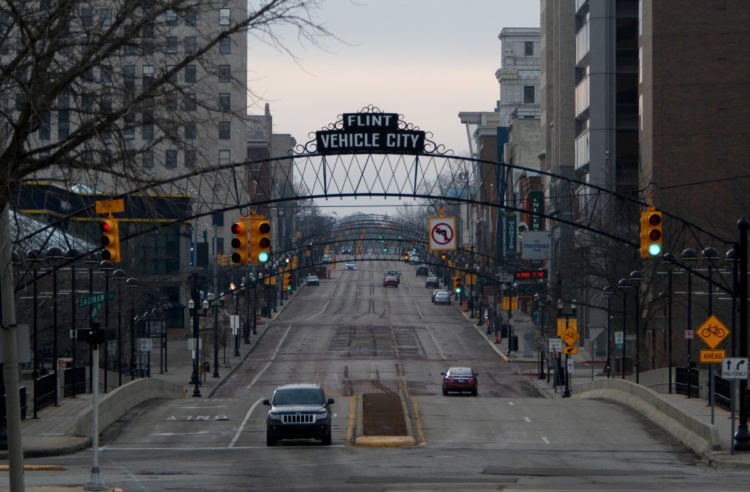 Home to cities like Detroit, Flint and Benton Harbor, Michigan is a regular offender when it comes to states with the worst crime stats. While there’s been an overall downward trend in crime over the past 17 years, some cities and townships in Michigan are still clinging onto the old days, with reports of violent crime and misdemeanors making the news on an ever-increasing basis. If you’re keen to avoid the biggest trouble spots, check out our list of the 20 most dangerous cities in Michigan.

As the birthplace of Oklahoma City bombing conspirator Terry Nichols, it would seem fair to say Lapeer has a troubled history when it comes to crime. Despite (or perhaps, because of) the high cost of living (the average home price of $93,400 is well above the state average), unemployment and poverty are on the increase. As so often happens when a city has more people than it does jobs, crime is on the up, giving it an overall mark of 8/100 (with 100 being the most safe and 0 being the least) by Neighborhood Scout.

Let’s be clear, there are worse places in the world to live than Port Huron. With a historic downtown area, a boardwalk, marina, museum, lighthouse, and the multi-million-dollar McMorran Place arena and entertainment complex, it’s got attractions, amenities, and recreational pursuits in abundance. Unfortunately, it’s also got plenty of crime. The most recent figures published on Neighborhood Scout suggest a 1 in 108 chance of local residents becoming the victim of violent crime (compared to a state average of 1 in 222) and a 1 in 52 chance of them becoming the victim of a property crime (against a state average of 1 in 56). Granted, a lot of cities are doing worse (as we’ll shortly find out), but there’s clearly a lot of room for improvement here.

As the 28th largest community in Michigan, you’d expect there to be some problems in Battle Creek. After all, the more people, the more potential for wrongdoing. When we look at the crime figures, this certainly holds true… to a slightly alarming degree. Move to Battle Creek and your chance of becoming a victim of a violent crime increase from the state average of 1 in 122 to 1 in 100. Your chance of becoming a victim of a property crime, meanwhile, moves to a frankly frightening 1 in 26.

Want a frightening stat? In 2016, the violent crime rate in Pontiac was 214.37% higher than the national average. Combine that with a sky-high property crime rate, and we’re looking at 547 aggravated assaults, 26 arsons, 520 burglaries, 15 murder/ manslaughters, 66 rapes, 121 robberies, 134 motor vehicle thefts, and 771 larcenies and thefts. On the plus side, City Ratings’ projected figures for 2019 show a decline across the board… although with murder down by just 1 point and rapes still at 58, it may be some time before we see Pontiac drop off our list entirely.

In 2017, the crime rate for Saginaw was 2 times higher than the US average… higher, in fact, than 96.3% of all US cities. 2 years later, and the picture has barely improved, with 787 violent crimes and 954 property crimes being the current average for the city. To put that in perspective, the number of crimes committed per square mile in Michigan as a whole is just 28. In Saginaw, that jumps to a staggering 96

With a crime rate of 41 per one thousand residents, Ypsilanti is not only a devil to pronounce, it’s also far from saintly when it comes to safety. Violent offenses such as rape, murder, non-negligent manslaughter, armed robbery, and aggravated assault are almost commonplace, while the property crime rates are no less depressing, with residents standing a 1 in 27 chance of becoming the victim of burglary, theft or motor vehicle theft.

According to the stats, the crime rate for Mount Morris Township is higher than 92% of the rest of Michigan’s cities and towns, regardless of size. This equates to 3,530 reported crimes per 100k residents, compared to a national average of 2745 and a state average of 2250.

While the overall crime rate for Harper Woods has been steadily decreasing over the last few years, there’s clearly still a lot of improvements to be made. Area Vibes currently gives the region an “F” for crime- a damning grade, perhaps, but one that makes perfect sense if you cast your eyes over the figures. While the average for reported crimes in Michigan stands at 2250, in Harper Woods, it’s over double that. While it may be nice to imagine the 5808 residents who reported a crime last year were just doing it for giggles, it seems unlikely.

According to City-Data, there are currently 23 registered sex offenders living in Fruitport. Not many, you may think, but considering the town’s diminutive size, that small figure translates to a resident to sex offender ratio of 60 to 1. If that wasn’t sobering enough, a quick glance at the overall crime stats certainly is: based on current projections, Fruitport will experience 223 aggravated assaults, 7 arsons, 458 burglaries, 1178 thefts, 29 rapes, and 97 robberies by the end of 2019.

Thanks to a crime rate of 52 per one thousand residents, Albion can claim a position as one of the most dangerous cities in the US. Despite its small population of 8,285, the city has a shockingly high number of registered sex offenders (61 at the last count), which may be at least partly explain why residents have a 1 in 19 chance of becoming the victim of either a violent or property crime.

A review of Jackson on Best Places paints a frighteningly vivid picture of what it’s like to live in the kind of town where residents stand a 1 in 81 chance of becoming the victim of a violent crime. “Never ever move to this town! I was born there, grew up around there, made the tragic mistake of moving back there once and will never ever set foot there again! Jackson is a town with a black cloud hanging over it that has been there for at least the 64 years I’ve been around, and there are no jobs there at all. It’s principle products are bad backs, alcoholism, drug addiction, and divorce. Young people move away as soon as they are old enough. I sure did.”

It may be slightly safer to live in Flint Township than in its sister town of Flint, but it’s unlikely the residents are celebrating too hard at the news. When it comes to property crimes, the stats have improved over previous years. Violent crime, unfortunately, has done less well: according to City-Data, there have already been 223 aggravated assaults, 29 rapes, and 97 robberies in Flint Township this year alone.

With a considerable population of 76,263, you’d expect crime rates in Kalamazoo to be on the high side. Just how high, however, is quite shocking. In 2017, there were a total of 913 violent crimes committed in the city, given residents a 1 in 81 chance of being raped, assaulted, or killed outright. Property crime is even worse, with residents standing a 1 in 23 chance of having their house broken into or their car stolen (just to put this into perspective, the state average is 1 in 56).

Flint has been a regular fixture on “worst of” lists for years, and 2019 is proving no different. Violent crime is now 528% higher than the national average, giving the city’s less than fortunate residents a 1 in 51 chance of becoming the victim of a rape, murder, or assault. On the plus side, they only stand a 1 in 35 chance of experiencing a property crime- still terrible, but slightly better than they’ve fared in that regard in the past.

In 2017 alone, Benton Harbor residents experienced 218 violent attacks. Given that the population sits at just 9889, that equates to residents having a 1 in 45 chance of being killed, raped, or violently assaulted. Its only saving grace is a property crime rate that, while still dire, is only the 12th worst in the state. Even if we discount the crime stats, the picture for Benton Harbor is still grim: with unemployment at 20.8%, poverty at a shockingly high 48%, and a median household income of just $20,157, it’s one of Michigan’s most shamefully underfunded, undereducated secrets.

If you plan on moving to Benton Charter Township, make sure to invest in a high-quality security system before you do: according to Home Facts, residents are at a 94.62% higher risk of becoming a victim of property crime than anyone else in the US. It’s no picnic when it comes to violent crime either, with a crime rate that’s more than 453% higher than the national average.

The only thing surprising about our next entry is the fact it’s not further up the list. Since the financial crash of 2008 crippled the Motor City’s industry, unemployment and poverty have taken a stranglehold, turning even the more illustrious neighborhoods into shadows of their former selves. As is so often the case, poor prospects and low life quality translate into increased levels of crime- in the case of Detroit, this means a murder rate that’s 8.7 times over the national average.

It may be surprising to learn there’s a more dangerous city in Michigan than Detroit. But if you look at crimes per capita, the comparatively small city of Muskegon Heights beats the former by a whisker. According to the most recent crime stats, there were 195 violent crimes in the city in 2017, equating to a very worrying statistic of 1 violent crime per 55 residents. The most concerning aspect of the figures is their upward trend: unlike most cities across the US, homicides, rapes and aggravated assaults are on the rise in Muskegon Heights, as are property crimes such as theft, auto theft, and burglary.