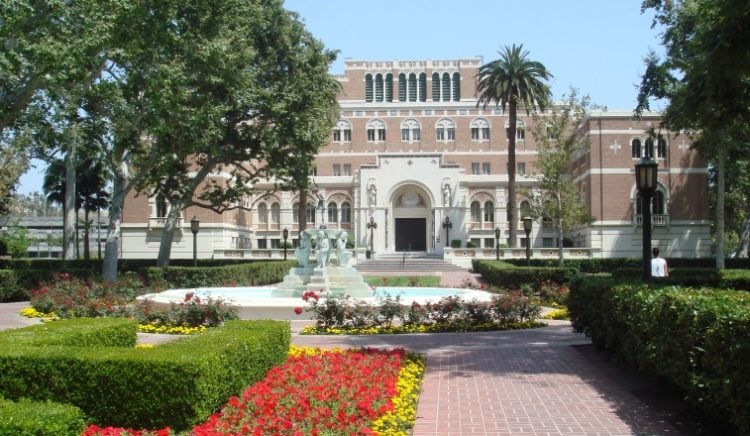 The University of Southern California is also known as USC. It’s a private institution of higher education which is the alma mater of some very notable professionals in the business world. Many graduated from its prestigious USC Marshall School of Business. USC is the oldest functioning research university in the state of California, founded in 1880. The undergraduate enrollment ranges between 18,500 to 20,000 with an acceptance rate of 18 percent of applicants and a 91 percent graduation rate. Here are 20 of the most notable USC alumni in the business world.

Richard Knerr graduated from USC in 1947 with his bachelor’s of science degree. He went on to become the co-founder of the famous American toy brand Wham-O. He also served as the president of the very large and successful company.

Marc Benioff is another notable USC alumni who graduated with his bachelor’s degree in 1986. He went on to spend 13 years working under the mentorship of Oracle’s Larry Ellison, as his protege, befor moning on to found his own company. Benioff co-founded Salesforce.com in 1999. He also served as the CEO and after the company sold, he is still owner of 5 percent of the cloud computing software giant with a current net worth of an estimated $6.8 billion.

Terrence Lanni graduated with his BA in speech from USC and continued to earn his BS in general management in 1965. He had a successful career in business as the Treasurer, then Senior VP, advancing to the Executive VP or Ceasar’s World, Inc. He became the Chairman and CEO of MGM Mirage and served from 1995 though 2008. He was also a board member of MGM Mirage, KB Home, the Jim Pattison Group and Del Mar Thoroughbred Club. He was also a Trustee of Santa Clara University, on the board of the Keck School of Medicine, the Marshall School of Business and trustee of the Ronald Reagan Presidential Library Foundation. He was inducted into the Gaming Hall of Fame in 2000.

Kevin Tsujihara graduated from the University of Southern California with his bachelor’s of science degree in 1986. He became a highly successful business man in recent years. After earning is degree, he joined the Warner Brothers company in 1994. He served in a variety of position leaning about the home video division, digital distribution, video games and the new technology which was beginning to emerge. He picked up a lot of experience along with way, working his way up to progressively more responsible positions within the company, becoming a vice president and eventually, the CEO of Warner Brothers.

Edward P. Roski graduated from the University of Southern California with his bachelor’s of science degree in 1962. He is the Chairman of the Board of the Majestic Realty company as well as the President of the company. Mr. Roski is also a co-owner of the Los Angeles Lakers and the Los Angeles Kings ball teams, as well as co-owner of the Staples Center. He is an avid sports fan who assisted in the development of the Los Angeles Staples Center, as well as being a highly respected philanthropist who gives freely of his time and money to support cultural and other civic causes. Mr. Roski is among the most successful alumni of USC who have gone out to carve a niche in the business world and make a fortune in the process.

Ronald N. Tutor graduated with his bachelor’s of science degree from the University of Southern California in 1963. He became the Chief Executive Officer of the Tutor-Perini Corporation in 2008, which is a privately held California company within the construction industry. The business merged with the Tutor Saliba company in 2008 and now serves as the CEO of this company as well s their Chairman of the Board and the President. He is also a member of USC’s Board of Trustees.

Sri Manchala earned his MBA from the University of Southern California and went on to become one of their most distinguished alumni. He worked at India’s largest paint and chemical manufacturer for a short period of time in 1994, for Asian Paints. He went on to join the Silicon VAlley KPMG Consulting firm in high tech consulting services. He also worked for the tech division of Cisco Systems and continued to build his impressive career history. He founded the Trianz company and serves as the chairman and the CEO with more than 25 years of experience in the industry.

Henry Caruso was a distinguished alumni of USC, earning his bachelor’s of science degree. He went on to forge an impressive career in the automobile industry by building a portfolio of several new car dealerships with the Chrysler, Ford and General Motors backing. He is the founder of Dollar Rent A Car, which business he developed in 1966, calling it Dollar A Day Rent A Car.

Timothy Johnson attended USC and he earned his bachelor’s of science degree in 1988 from the Marshall School of Business. He joined the university’s Entertainment Management Association and became the president of the program. Mr. Johnson had an obvious passion for the entertainment industry, and a flair for running the business side of it. He learned a lot about the television and film industries and served in many of the major studios in a variety of positions. He was actively involved in the production of several hit television series and his is currently the Chairman and CEO of the Johnson Production Group.

Bradley Wayne Hughes graduated from USC with his bachelor’s of science degree in 1957. He went on to become the co-founder of Public Storage which was established in 1972 and he also served as their CEO. The company was a huge success and opened up a more than two thousand locations throughout the United States and Europe. Mr. Hughes’ current net worth is estimated at $3 billion, making him one of the most successful entrepreneurs to graduate from the university.

Dan Bane earned his bachelor’s of Science degree in accounting in 1969. He developed a successful career in the grocery retail industry. In 2001, he became the chief executive officer a well as the chairman of Trader Joes, which is a specialty grocer. Under his leadership, the California based business has become a huge success, turning the private label into a brand with a large mass of consumer followers.

Ivan Glasenberg attended the University of Southern California in the graduate program and earned his Master of Business Administration degree in 1983. The native of Johannesburg, South Africa joined the Glencore International company and worked at their Australia location for two years. He was made manager of the Hong Kong and Beijing Offices of Glencore International in 1988. In 2002, he was appointed as the CEO of the company.

Robert M. Fomon attended the University of Southern California and graduated with his bachelor’s of science degree in 1951. He would go on from there to become highly successful in the business world, although there were ups and downs in his career in finance. He was appointed as the governor of the New York Stock Exchange. He also served as the chairman as well as the CEO of E.F. Hutton and Company.

Frank Fertitta III graduated from USC with his bachelor’s of science degree in 1984. He is one of the most notable alumni who has gone out into the business world and become tremendously successful. He came from a family who owned and operated businesses in the Casino and gambling industry. He and his brother Lorenzo were also involved with promoting UFC mixed martial arts events and the two sold their interest in UFC and made billions. He is also the CEO of Station Casinos and has an estimated net worth of $2 billion. Although he comes from a very wealthy family, he and his brother take full credit for making their fortune through the business that they developed together.

Chris DeWolfe earned his Masters in Business Administration degree from the University of Southern California in 1997. He went on to become a co-founder of the mobile entertainment company called Jam City, which is a global leader in the industry which is an international provider of social media games. He also serves as the CEO of the company. In addition to this, he also co-founded MySpace, as well as serving as the CEO of the company. He has been recognized in Time magazine’s list of the most 100 influential people in the world in 2006.

Preston Martin is a highly successful alumni of the University of Southern California who earned his master’s in business administration in 1948 after receiving his bachelor’s of science degree the year before from USC. He went on to serve as the vice chair on the board of governors for the Federal Reserve Board. In addition to this, he founded the PMI Mortgange Insurance company showing his tremendous versatility and effectiveness in the business world.

Yang Ho Cho earned his master’s of business administration degree from the University of Southern California in 1979. He went on to become the CEO and president of Korean Airlines as well as the Chairman of the Hanjin Group. Mr. Cho was a notable alumni who recently passed away from illness, but leaves behind his legacy.

Paul Orfalea attended the University of Southern California as a graduate student. He earned his master’s of business administration in 1971. He went on to become the founder of the largely successful printing business Kinko’s. The company was so successful under his leadership that he became wealthy, and was able to help to make the world a better place for himself as well as for others. He is also a well respected philanthropist who is the Orfalea College of Business benefactor.

Armen Margarian was an undergraduate student at the University of Southern California who earned his bachelor’s of science degree in 2001. He continued with his education at USC in the graduate program and received his master’s of business administration in 2006. He went on to become the co-founder of NexusLab, Inc. This company was so successful that it was included in the category of Inc.5000 Companies. He also served as the CEO of the company he founded to become one of the most notable alumni of the current decade to have attended and graduated from USC. He even earned two degrees from the institution.

Charles Elachi is another distinguished alumni from the University of Southern California. He earned his master’s of business administration from the school in 1978. He went on to become the director of the Jet Propulsion Laboratory, also known as JPL. Mr. Elachi has been intimately involved with the building of an earth science satellite to be used for a NASA mission to Mars as a part of a joint mission with the European Space Agency.