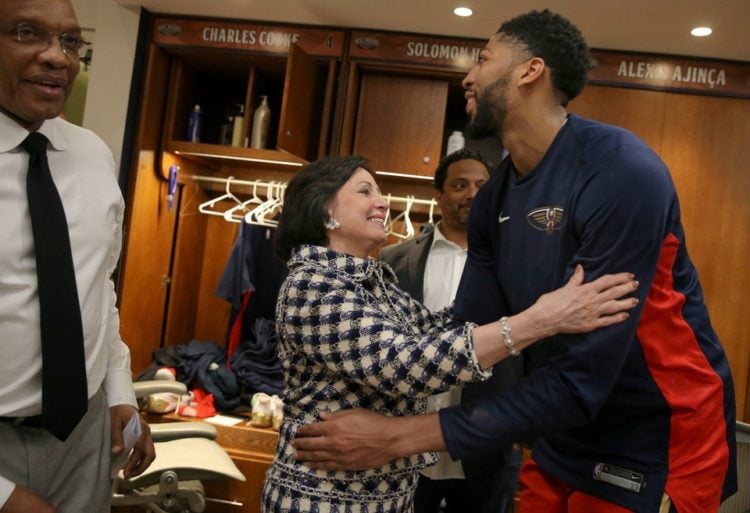 Gayle Benson hit the headlines in March 2018 when she assumed ownership of the New Orleans Saints and the New Orleans Pelicans after the death of her husband, Tom Benson. Her ascension to club ownership attracted much media attention at the time, with many critics citing the 20-year age gap between her and her late husband as evidence of a “gold digger”. If that wasn’t enough, Benson has endured multiple court cases, allegations of racism, and a vicious family battle. Despite the scandals, Benson has persevered, and continues to push forward with both her business ventures and her philanthropic activities. Read on to discover more about the New Orleans native.

1. She met Tom Benson at the memorial of his late wife

Gayle Benson, born Gayle Marie LaJaunie, had already been married twice by the time of her marriage to Tom Benson. Her first marriage at the age of 19 ended in divorce and annulment within a year. Her second marriage came after she befriended two young children; the mother turned out to be a drug addict, and the father turned out to be an equally troubled young man named Thomas Bird, who she would later marry. Their relationship was tumultuous from the start, and after several years of unhappy marriage, Benson would again file for divorce. In 2004, her fortunes took an upward turn when she met widower Tom Benson. The meeting occurred at the memorial of Benson’s late wife…. Gayle did a fine job of helping Benson overcome his grief, and within the year, they were married.

Following her husband’s death, Benson inherited his controlling interests in both the New Orleans Saints of the National Football League, and the New Orleans Pelicans of the National Basketball Association. As the principle owner of both teams, Benson entered the record books as the first female majority shareholder of both a NFL and NBA franchise.

3. She used to run an interior design business

During the 1970’s, Benson ran an interior decorating business with her then husband, Thomas Bird. Despite a series of successful renovations, the couple seemed to find it difficult to keep in their client’s good books: between 1987 and 2000, they managed to get served a grand total of 18 times, usually out of failure to pay their bills or for being in breach of contract. On one occasion, Benson was even arrested on suspicion of stealing furniture from a customer… fortunately, she fought back, and the charges were dropped. The pair weren’t always quite so lucky, however, and were forced to stump up for out- of-court settlements on more than a few occasions.

4. She almost lost her inheritance

Tom Benson had originally intended to leave his voting stock shares of the New Orleans Saints and New Orleans Pelicans to his bloodline (which included his daughter, grandson, and granddaughter). After a falling out about the family’s attitude to his remarriage, he revised his decision, named Gayle his successor, and wrote a scathing letter to his daughter and grandchildren to say he wanted no further contact with them. His family challenged his decision, claiming he was not mental competent enough to make such a decision. Their lawsuit was ultimately dismissed, and Gayle proceed to inherit Benson’s estate following his death.

5. She’s been accused of racism

In 2015, Benson was accused of racism and violating federal labor laws by Rodney Henry, a former personal assistant to her husband. As reported by The Advocate, Harris claimed that Benson had treated him with “disdain and disrespect” on account of his race, and owed him money in unpaid overtime. An NFL arbitrator found in Henry’s favor with regards his labor complaint, but would ultimately dismiss his allegations of racism.

6. She owns a majority share of Dixie Brewing Co

Prior to her husband’s death, the couple acquired a majority share of Louisiana brewery, Dixie Brewing Co. The couple purchased the company with the plan of bringing it back to its home in New Orleans, after it was forced to move its production elsewhere in the aftermath of Hurricane Katrina. In August 2018, Benson announced the Brewing Company would relocate to the the former MacFrugal’s building on the Industrial Canal. The site is to serve as both a distribution site and a consumer destination, with plans for a brew- pup and recreational activities in the making.

Benson is a generous contributor to the University of the Incarnate Word, a private catholic school in Texas. Her support of the establishment was recognized in 2008, when the campus named its new football stadium (which had been funded by the Benson family) “the Gayle and Tom Benson Stadium”. Benson is also an active supporter of cancer care and research, donating $20 million to the cause in 2015 alone.

In 2012, both Gayle and Tom Benson were awarded the Pro Ecclesia et Pontifice (the highest papal honor available to laypeople) in recognition of their contributions to the Catholic Church. The pair were nominated for the award by the Bishop of San Angelo, Michael Pfeifer, a longtime friend. As reported by The Time-Picayune, Pfeifer cited the Benson’s $15 million donation to the Oblate School of Theology (the residence of Pfeifer’s religious order, the Missionary Oblates of Mary Immaculate), their $2 million donation to a senior center at Our Lady of Guadalupe Church in New Orleans, and their $8 million donation towards the construction of a Jesuit Centre at Loyola University as justification for his nomination.

On May 11, 2019, Benson was awarded an honorary doctor of humane letters by Loyola University. The degree comes in recognition of her varied philanthropic endeavors in New Orleans, and her many contributions to the University. “She is not only one of the most influential women in sports and in the city of New Orleans, she is a stalwart supporter of the Catholic faith, helping Loyola and Catholic schools across the city to educate future generations,” Loyola president stated.

In April 2019, it was announced that Benson was joining forces with local developer Daryl Berger to purchase the Hyatt Regency hotel in New Orleans. Benson’s share in the hotel was managed through her real estate company, GMB Properties, and will be her (and the company’s), first hotel purchase. “My late husband Tom believed in reinvesting in our community and that philosophy has made our city a better place. Our investment in the Hyatt will continue that legacy,” she said of the move.