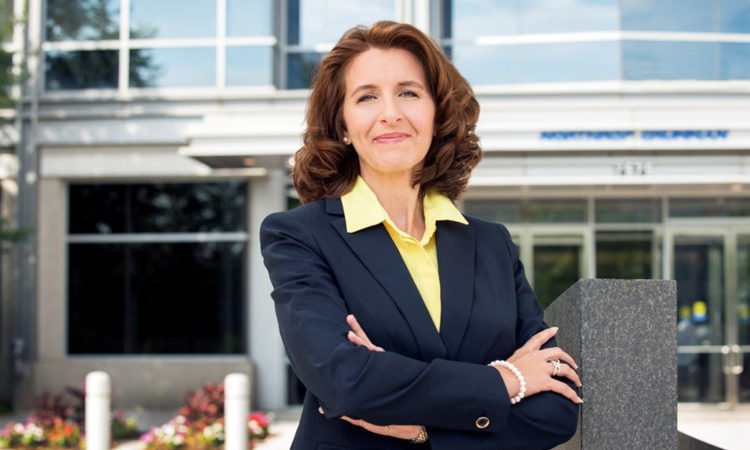 As of this writing, Kathy Warden will soon be the Chief Executive Officer of Northrop Grumman Corporation. Currently, she serves as the Chief Operating Officer and will move into her new position this coming January. She is a unique individual that has held not only several different jobs, but also a number of different positions for sitting presidents. She also serves on a couple of different councils and on the Boards of Directors for two organizations. All of that is important in and of itself, but you might be more interested to know the 10 things about her that are listed below. When you’re finished reading, you’re likely to have a much better picture and who she is, both in her professional and personal life.

1. She spent almost a decade working for General Electric

She’s held several different positions at Northrop Grumman, but she hasn’t always worked for the company. As a matter of fact, she spent almost a full decade working for General Electric long before she ever went to work for her current employer. Granted, the work was different and the entire company culture was different, largely because the two entities focus on different things. That being said, she credits her previous experience with giving her a wider view on things and helping her better understand what’s expected of her now.

2. She’s worked for other aerospace companies before

Before she took her first position at Northrop Grumman, she also worked for General Dynamics, another Aerospace company. In large part, she was responsible for developing much of the technology that’s used at the company and she did such a good job in her chosen field that she was eventually offered a job at Northrop Grumman that led to one leadership position after another.

3. She’s also not afraid to strike out on her own

In between her stent at General Electric and her transition to General Dynamics, she also decided that it was time to venture out on her own and become a key member of an independent internet company, something of an entrepreneurial venture. This proves that she’s not afraid to do whatever interests her, nor is she afraid to strike out on her own and do whatever she thinks is best for her and her family.

This is where she got her bachelor’s degree. Long before she even finished that degree, she had already made the decision that she was going to go on and get her Master’s as well. As a result, she was already applying for admission to George Washington University before she had even graduated from the university she was currently attending, James Madison.

Even though she spends much of her time working around sensitive subjects that are a matter of National Defense, she actually achieved her master’s degree in marketing. She often quips that she has had a career that spans a lot of different types of jobs and that everything has prepared her for what she does today in one way or another.

6. Her career has spanned many industries

Many people might attribute having a career in so many different types of industries to a lack of focus. When she is posed with that particular question, she’s quick to point out that as opposed to having an inability to focus on one thing, she has many managed to master many things across a wide array of different industries. This is something that very few individuals are capable of doing, yet she has made it look really easy. She also points out that if a person is interested in something, they shouldn’t hesitate to go for it, no matter what direction it takes them in.

7. She recognizes the importance of understanding technology

Regardless of the positions that she has held, it’s always revolved around technology in one way or another. She’s quick to tell other individuals that in the modern world, almost every job revolves around technology so it’s important to learn how to understand it. She even goes as far as saying that it should be something of a hobby, so that you’re always capable of learning new things instead of becoming complacent.

8. She loves to travel whenever she gets the chance

She doesn’t have a lot of spare time, but when she gets the opportunity, she loves to travel. It isn’t even about the location as much as it is about the opportunity to go somewhere new and learn new things.

9. She has two children

While she’s very successful in her career, she is a mother first and foremost. She’s always putting her children first and she makes sure that their needs are met before her own.

10. She considers herself a soccer mom

She says that as opposed to having a number of hobbies that are her own, she merely has an interest in the things that her kids are interested in. She’s a self-proclaimed soccer mom and says that she loves every minute of it.