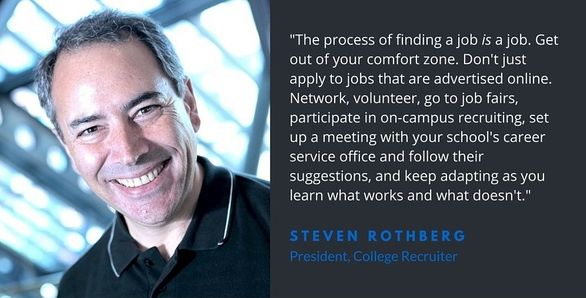 Company founder Steven Rothberg managed to channel his passions into something more productive after graduate school. A fully recovered lawyer, Steven founded the business that morphed into College Recruiter and now, as its visionary, helps to create and refine the company’s strategy and leads its business development efforts.

We had the opportunity to ask Steve a number of questions about CollegeRecruiter.com and what has kept the company in business for 20 years.  Here they are:

1. Your initial background was in law and you began as a law clerk at Honeywell. Why the switch to recruiting?

My plan since about the age of 13 was to go into law for five or so years for the experience and then either start my own small business or join one. I went to law school, did well, passed the bar, and was working as a judicial law clerk when I decided to accelerate my plans by starting a small publishing business that later morphed into College Recruiter.

2. Given that so much of today’s recruiting is online, tell us about how College Recruiter began (given the internet didn’t exist then) and how it’s evolved….

he business I founded in 1991 initially published maps with advertising around the borders, including one for the largest school in my region: the University of Minnesota (Twin Cities). I then diversified by adding an employment magazine that the school distributed to its graduating seniors. Within a couple of years that grew to four regionalized publications distributed at over 200 schools. In 1995, a career service office director at the University of Minnesota told me that “there’s this thing called the Internet.” She didn’t know what it was but some of her students were using it to prepare for interviews. We launched the first version of our site in November 1996 and by September 2000 had shut down the print publications to focus on what had become our job board, CollegeRecruiter.com.

3. Most companies today heavily rely on Linkedin for recruiting. Is that a large part of your business? If so,how?

We rarely use LinkedIn for recruiting.

4. What do you think the biggest change in the college recruiting landscape has been in the last 10 years?

The college recruiting landscape has changed significantly in the past 10 years primarily in how internships have grown in importance and are now seen both by students and employers as the best way of recruiting full-time, entry-level employees. Internships are, essentially, temp-to-perm relationships that allow both the student and employer to try each other out. If they’re not a good fit, both can easily walk away without feeling guilty or bad. Employers with good but not great internship programs extend offers for permanent employment to about 75 percent of their interns.

5. What do you think the biggest obstacles are for college grads finding entry level work?

Perhaps the biggest obstacle for college grads finding entry-level work is the massive size of their student loan debt. Many students graduate with tens and sometimes hundreds of thousands of dollars in debt, which means that they must make a non-tax deductible payment similar in size to a mortgage payment. They can’t default or their interest rates zoom from high single digits to 25+ percent. They can’t discharge the debt in bankruptcy like virtually all debt can be. The large loan payments mean that students cannot afford to take jobs which pay little but offer great experience. Those jobs were key to previous generations being able to get the experience they needed to excel in the workplace.

6. What colleges do you think have the best and most legitimate career placement services out there?

The colleges with the best and most legitimate career service (not placement) offices tend to be the well known business and other professional schools. They’re well funded primarily by employers who donate the funds to help ensure a steady stream of well qualified students.

7. What do you think about for profit education companies like Career Education Corporation? Legit or scam?

Some for-profit schools are accredited, have low loan default rates, and offer good value to students. But many are not accredited, have high default rates, and offer negative value to students as the students which are unfortunate enough to have been conned into attending end up with a lot more debt and typically either no degree or a degree which is worthless. Fortunately, the U.S. Department of Education has recently started cracking down on these schools.

8. How has College Recruiter stayed in business as long as it has?

College Recruiter has stayed in business for a long-time for a number of reasons. We’ve avoided get rich quick schemes offered by venture capitalists who are happy to throw a lot of cash at you but typically shut you down if they haven’t made an enormous profit within about five years. We’ve also done a pretty good job of focusing on our mission of helping students and recent graduates find great careers. We’ve certainly made our share of mistakes over the years, but when we make decisions consistent with that mission then the decisions almost always work well.

9. What’s the one piece of advice you’d give to an aspiring business owner?

Stay focused on what generates the most long-term profit. Forget the fancy office furniture. Forget creating “buzz” that somehow, mysteriously, maybe will translate into sales. Forget deviating from your core business. And read and follow the Traction book written by Gino Wickman.

10. For fun. What’s the nicest college campus you’ve ever been on and which Dean has the nicest house?