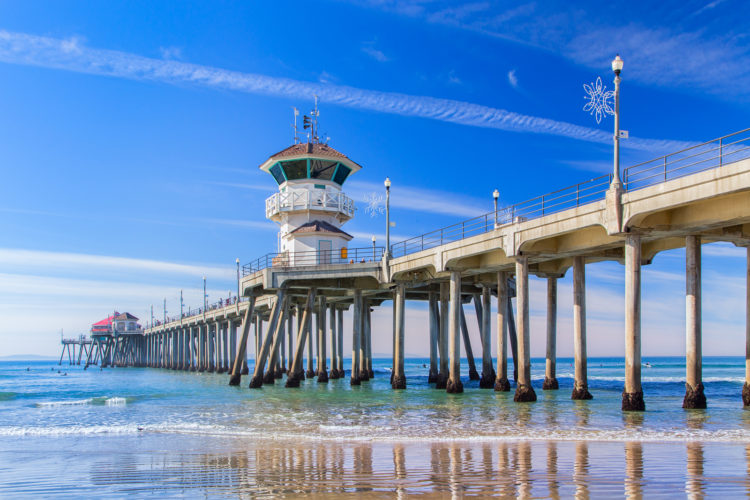 It doesn’t take a math whizz to work out that Orange County is an expensive place to live. The cost of living in this exclusive little slice of California is a whopping 52 percent higher than the national average. Whether you’re buying a beer or a condo, a haircut or a movie ticket, it’s going to leave a much bigger hole in your wallet in the O.C than it would pretty much anywhere else. But even somewhere like Orange County has its more affordable parts (although in truth, some of them might require you to stretch your definition of ‘affordable’ to breaking point). If you want the perks of living in Orange County but not the price tag, these are the 10 cheapest places to live in Orange County.

Calm little La Habra might rank as one of the cheapest places to live in Orange County, but don’t mistake low prices for low desirability. Known for its welcoming atmosphere, its excellent public schools, its Children’s Museum, and its well-rounded schedule of events and activities, this quiet bedroom community in the north of the O.C. is a great place for anyone looking for a friendly little town that’s big on charm but small on prices. According to firstteam.com, the average family home in La Habra costs just $651,646. In other parts of the country, it would be a vast sum to pay. In the O.C., it’s nothing.

Former All-America City Award holder Westminster has plenty to offer, including a diverse, welcoming population, a vibrant culture, an amazing food scene, a jam-packed lineup of events, and a booming job market. The only thing it doesn’t have, in fact, is a high cost of living. A smidge over $650,000 will be enough to get you a very decent family home. Rental property is equally affordable. If you want a great lifestyle on a shoestring budget, it’s a sound choice.

If you’re looking to combine the conveniences of the city with the charm of the rural, look no further than La Palma. With its safe, friendly vibe, its small-town feel, and its friendly, active community, it makes a great base for families and retirees who value safety and security over crowds and congestion. It might not have much by way of nightlife, but what it does have is much more valuable – cheap real estate. The only problem? Once people move in, they rarely leave. If you want to find a house for sale, you’ll need to keep a constant watch on the property listings.

The historic city of San Juan Capistrano has a vast range of housing options. Some of them will need you to have several million in the bank before you can step through the front door. Others are mercifully cheaper. If you confine your house hunting to the city’s more affordable neighborhoods and steer well clear of the gated communities, you should be able to walk away with a house for just a little over $700,000. The city itself is gorgeous, with history and charm seeping from every corner.

Garden Grove is a decently sized city of just over 170,000 people. Despite its size, it boasts a slightly rural feel – something no doubt helped by its excellent farmer’s markets and its strawberry festival, an annual celebration of the city’s agricultural roots that ranks as one of the biggest community festivals on the West Coast. The cost of living won’t leave you struggling to make ends meet, while the cost of property, by Orange County standards anyway, is refreshingly low.

According to Irvine Company Apartments, Tustin is a great destination for newcomers to Southern California who want to acclimatize themselves to the lifestyle without suffering a major cultural or financial shock. With a good range of low-cost housing options, easy access to the beach, excellent shopping, and some great schools, it’s an attractive, affordable way to enjoy the perks of the O.C. without the financial flipside.

According to zumper.com, the small city of Brea ranks as one of Orange County’s most affordable places to live. Other than the attractive house prices and low cost of living, Brea also boasts a number of other attractions, not least an incredible public art program that’s set an example for hundreds of other such programs across the country. If affordability and art sound like an awesome combination to you, you’ll find it a great place to call home.

In a ‘normal’ part of the country, $1695 per month would be a devilish price to pay for a one-bedroom apartment. But let’s face facts, we’re not dealing with a normal part of the country, we’re dealing with Orange County, and here, $1695 is pretty much as low as it gets. If you want to benefit from these ‘low’ prices yourself, you’ll need to consider making the move to Santa Ana. In fairness, it’s not a hard decision to make – not only is Santa Ana one of the most affordable places to live in Orange County, but it’s also one of the best. Family-friendly, blessed with a rich blend of cultures, a diverse community, historic neighborhoods like Floral Park and Washington Square, and modern developments in the downtown area, this is a city with a little something for everyone. If you want to enjoy the good life without paying a premium for the privilege, it’s an obvious choice.

As the home of the Disneyland Park, it’s common knowledge that Anaheim is the “Happiest Place on Earth.” But did you know it’s also the 2nd “Cheapest Place in Orange County?” According to california.com, that’s exactly what it is. A three-bedroom house will cost just a fraction over $605,000, making it an incredibly attractive option for families on a budget.

Buena Park is a vibrant, entertaining city packed full of attractions, distractions, and fun. Located just across the way from two of the O.C’s other budget-friendly hot spots, Anaheim and Santa Ana, it’s a central, convenient city that’s as attractive to families as singles and retirees. The cost of living, like most other things about the city, is a delight, earning it the proud distinction of being the cheapest place to live in Orange County.