Home
Business
Sports
What Does it Cost to Attend an Arizona Cardinals Game?
Prev Article Next Article 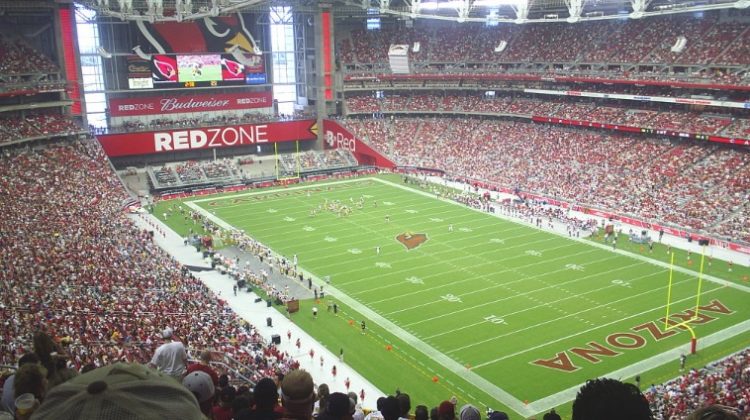 How much does it cost to go see the Arizona Cardinals? If you’re a fan of the team but you’ve never actually been to the stadium in order to see a game in person, this is probably the first question that you’re asking yourself. It only stands to reason that before anybody decides to actually participate in something, they want to know how much it’s going to cost them ahead of time. That’s perfectly understandable, especially when you consider the fact that it’s more important than ever for people to carefully manage their money these days. Assuming that you live close enough in the area that you can simply buy tickets and drive there without having to fly, find accommodations, or anything like that, the total cost of going to the game is going to be comprised of things like the number of people you’re paying for, the ticket prices themselves, items at the concession stand, and the cost of parking. In order to get a better idea of the total cost, it’s important to examine all of these things individually so that you can get a better idea of the total expense involved.

Stadiums specialize in creating a wide range of ticket prices in order to accommodate the greatest number of customers. It’s the same thing if you’re going to see the Arizona Cardinals. Depending on where you decide to sit, you can get tickets for as low as approximately $30. Of course, you can also spend almost $300 on a single seat. The idea is to give you some leeway when it comes to choosing where you want to sit. Clearly, the nicer seats that have a better view and more amenities will cost more money but even the $30 seats aren’t necessarily considered bad. You might not be too thrilled about sitting there if you’re going to a concert, but for most people, it works just fine for going to a game. That being said, if you really love the idea of going to see the Arizona Cardinals and you’ve waited a lifetime to do it, you might decide to go ahead and fork over some extra cash in order to get better seats that are closer and afford you a better view.

You Have to Have Money for Food

Okay, maybe you don’t have to have money for food, but it certainly makes it more fun if you do. Most people don’t even think about going to a game without buying something at the concession stand. It’s part of the overall event and not going is sort of like waiting a lifetime to see your favorite band and then leave before the opening act is even finished. Concession stands can be pricey, that’s for sure. The good news is that some package deals are offered during Arizona Cardinals games that allow you to get a few basic staples without spending a ton of money. As a matter of fact, you can get a deal that allows you to purchase a hot dog and a drink for about ten bucks. They also have a lot of kids meals on the menu for roughly the same price. This can really save you some money, especially if you’ve got several people in your group and you’re the one footing the bill for it all. No matter how you look at it, you’re not going to get out of any concession stand for less than $10, so this deal is about as good as it’s going to get.

What About the Car?

Most people forget to include parking in the overall cost of their trip, and that can be something that can really sting your bank account. Parking is not cheap and it’s even more expensive at stadiums when an event is going on. Parking here might cost you as little as $20 or as much as $35, depending on how full the parking lot is. High-profile games are probably going to cost you more and if you don’t get there early enough, you might find yourself scrambling to find a spot and paying more in order to park there as well.

So, if you’re planning on going to an Arizona Cardinals game, it can cost you as much as you want to spend but if you’re trying to keep the budget as low as possible, plan on $30 for tickets, $10 for the concession stand and average $30 for parking. Therefore, your total to pay your own way into the game and get something to eat would be about $70. For each person that you’re bringing along with you, plan on adding about $40 to that amount.