Home
Business
Sports
How Much Money Do the New York Yankees Bring in Annually?
Prev Article Next Article 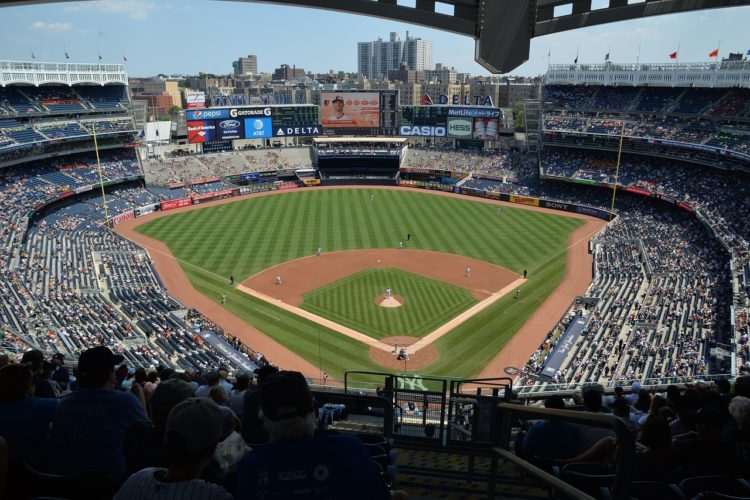 It’s commonly known that only the very rich become owners of major sports teams in the United States. The New York Yankees is a team that has had its shares of ups and downs in revenue through the past several decades, but they’re doing remarkably well. As you’re grumbling about the rising cost of tickets to watch them play live, have you ever wondered how much the team is worth and what kind of revenues they bring in per year? We checked into their previous year to get an idea of how much the Yanks bring in and the numbers may surprise you.

The New York Yankees according to Forbes, have an estimated valuation of $4 billion. The team is owned by the Steinbrenner family and was purchased in 1973 for a price of $8.8 million [1]. The Yankees saw a reduction in payroll for the 2017 season making them the seventh in rank in accordance with pay for players[1].

Ticket sales are up but still low

The Yankees had been in a slum on ticket sales since 2009 but have recently seen an increase in the number of fans in attendance during the last season. They jumped from $231 million in sales to $236 million. Although this is still at roughly 40% below their highest sales revenues for ticket and suites, it shows that they’re coming up from the sharp decline [2].

According to Forbes, the Yankees have brought in a total of $526 million in revenue [2], This is down from its 2017 annual revenue of $619 million [4], despite their efforts to offer incentive pricing such as $10 grandstand seats at each event and a few other incentives such as tickets offered at half price. Performance of players on the field and otherwise high ticket prices throughout the previous year are believed to be factors in the low turnout for games, although they’re still one of the favorite MLB teams among New Yorkers [2]. They’re planning to raise the prices of certain ticket prices by an extra 10% but these are package deals and there will be some other packages that will actually go down in price as a means for adding attendance incentives.

The Yankees were one of the 30 MLB teams who again, decreased spending on salaries. Performance and low ticket sales were major contributing factors in making this decision. The total amount spent for the 2018 year on salaries was 192.9 million and it was the lowest that it has been since 2003 [3]. This definitely helped to add to the bottom line of the team.

Licensing deals for the Yankees

The New York Yankees have entered into a multi year deal with Doosan which is a South Korean mega company. In the deal, Doosan gets branding at Yankee Stadium, access to the players and VIP treatment at games. They’re combining their branding in a collaboration that will be good for both in boosting sales [4]. This is a part of the MLBs marketing strategy for the teams. All 30 clubs participate in market sharing in which a pool is created and each team contributes in accordance with their revenues to distribute the proceeds from collaborative activities with other brands [5]. The Yankees have done very well with their merchandise sales, although the precise figures have not been disclosed, it is a decent piece of the total picture when it comes to annual revenue [6]. Thousands of T shirts, coffee mugs and other merchandise are purchased at each game as well as from retail outlets carrying the licensed apparel and goods. When it comes to the revenue generated through televised games and specials, there is significant revenue brought in but the Yankees are not thrilled about their take on this due to the revenue sharing agreement that requires larger teams to pay more into the pool so the smaller teams can benefit [6].

The New York Yankees have been doing better in their annual revenues than in previous years. Although still far under their peak, they are starting to see an increase in ticket sales with merchandise sales holding their own. With a valuation of over $4 billion, the team is on stable ground for now, but we’ll just have to wait and see what the current season yields as figures begin to come in.