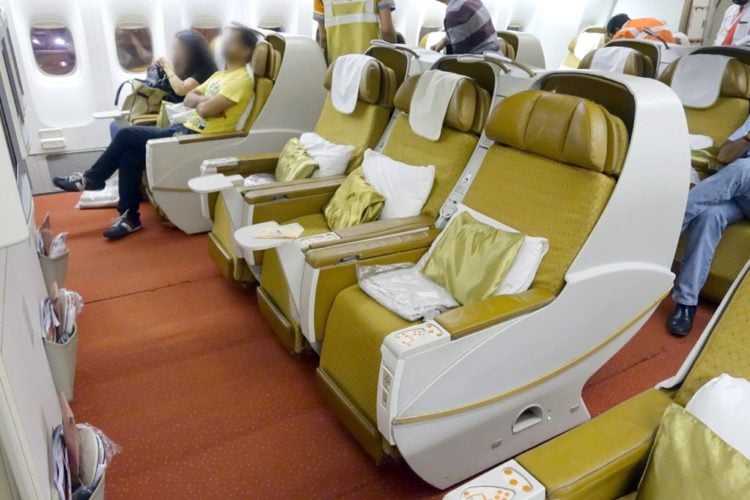 When you’re a frequent flyer you naturally want to go with the best commercial passenger airline carrier possible. The price of tickets is a consideration, but in many cases, it’s not the overriding factor influencing your decision. If you’ve been considering Air India, the airline has received some terrible reviews in the past decade, but they’ve made some significant changes, so here is what you can expect when flying business class now.

For some passengers, booking goes smoothly in the online format provided through the website. Others report that frequent error messages and crashes occur until they are able to find a browser that fully supports their site. Firefox was the former favorite and now Google seems to work best for most. It can be a little complicated when you go to redeem miles that you’ve earned from rewards cards. Not everyone experiences the loading issues, but some do, so be prepared and start booking early to work out the kinks and get the seat assignment that you want. A ticket from New York City to Delhi is going to cost $4,500 but if you have enough points saved up you can defray it to as low as under $250.

When you have a business class flight scheduled with Air India the web check-in is open 48 hours in advance. You can take care of some of the business before you get to the airport. It’s always recommended to arrive at the airport early A you can take care of all your check-in requirements here. There’s nothing unusual about the process, you simply go up to the counter to have your documents checked. If you have your boarding passes and they’ve been issued by other airlines, then you’ll be directed to a different podium. There, you’ll receive a reprinted boarding pass and if you have any time to spare, you can go hang out at the airport lounge.

The boarding times are printed on the pass and it’s a good rule of thumb to arrive a little early. With Air India, boarding was delayed in the New York to Delhi flight until 9:00. This was a half hour later than what was printed, but you don’t want to take a chance on missing the boarding call. The lines move fairly swiftly and it’s not difficult to find the line that you’re supposed to be in. The attendants do a good job of telling you who is boarding first and who will be boarding next.

The Air India 787 cabin contains 18 seats configured in a 2-2-2 layout. The attendants offer a friendly greeting as you board. The cabin is cheerful and the colors are warm with brown and red seats accented with gold pillows for passengers and red carpet on the floor beneath. It’s a welcoming environment and it’s clean although it doesn’t have the feeling of being high tech.

The seats are in good condition and they are clean. They come equipped with an ottoman in the front and one in the back, with the television screen placed in the armrest. The seats lie flat and are comfortable enough to sleep in if you want to nap or call lit good for the night. When the business class doesn’t fill up and the economy class is overcrowded, be warned that there will be an influx of upgrades, so it’s not likely that you’ll have a lot of privacy unless all classes of the flight are underbooked, and it happens during the off times occasionally. Under the ottomans is a decent sized storage area and there are even a few coat hooks available.

If you want extra privacy, you can raise the armrest which offers a small partition just for this purpose. In the same area is an electrical outlet for 110v along with a USB port and a water bottle holder. The seat controls are also conveniently located on the armrest for easy access.

Under the center console, you’ll find the entertainment controls. There is no wifi during the flight, but they do offer about 20 movies in English titles. They also offer a limited number of television programs. Six to be exact, so it’s not a bad idea to load your own entertainment on a laptop or iPad to keep yourself entertained. You’ll be given a set of headphones with noise canceling technology. The technology is basic compared to many other carriers, but it’s also a bit retro and feels somewhat quaint.

There will already be two pillows on your seat when you board, in addition to a light blanket. Right after you settle in before the flight takes off, attendants make the rounds to offer you packaged slippers, an eyeshade and a pair of socks. Next, you’re offered an amenity kit with face wash, sandal soap lip balm, and a toothbrush. You also get a set of pajamas and your menu is given to you at this time as well. It isn’t long after that you’ree offered warm towels and pre-departure beverages. You can choose from a variety of juices or champagne. Traditional Indian music is played as you board the craft and it helps to create a relaxing atmosphere.

After just 20 minutes into the flight, the crew comes around with tablecloths for the trays. Next comes a drink cart while you’re making up your mind about what to eat. With your drink, you get a bag of nuts. During this time if the flight is smooth, the captains come around to greet everyone.

The meals in business class consist of traditional Indian fare and they come with an entree, steamed rice, vegetables, and another side. Bread is also offered and the food is spicy as well as delicious. A fruit and cheese plate, as well as a dessert cart, are also brought through. You can also order more beverages throughout the flight. The service is exceptional.

Although the seats are not exactly state of the art, they are functional and comfortable. They fold flat and the blanket is heavy enough to throw off the chill of the cabin. When it’s time for breakfast, the meal is served efficiently after ordering. It’s a full meal with a choice of pastries, yogurt, fruits and other offerings that you can easily fill up on.

Flying Air India business class may not have been a high tech situation, but it was cozy and enjoyable. The service was excellent as was the food. The seats are comfortable and the cabin was quaint. They’ve made some remarkable changes that may change your opinion if you flew with them in the past.