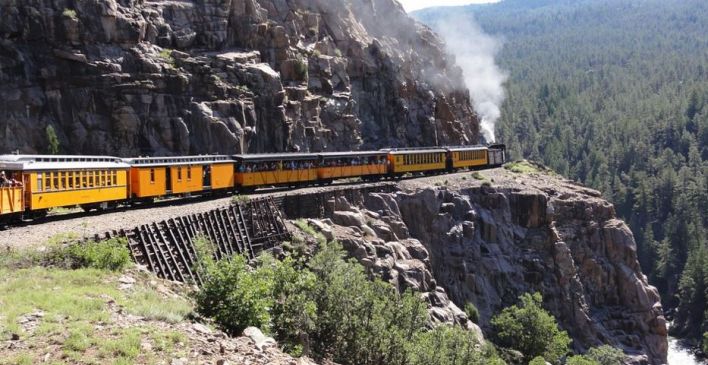 With the holiday fever fast kicking in, a week in the office or at work seems like the most boring thing ever, and you are always looking forward to the weekend so you can go out with friends and chill with family on Sunday. However, you do not have to spend it the same way.

Take it a notch higher and different from the others by taking a train trip. It is the ultimate way to relax as there is no traffic and it is also far from the hustle of the city. A train trip helps you interact with nature and creates a nostalgic feeling as most railways pass through the beautiful wood forests, small towns, over rivers and even in some cases over lakes.

It is the most romantic way to go for a weekend getaway or the holiday itself with your spouse. Also, a train journey is not only full of fun but also That is why we have put together a list of beautiful train journeys to take in the United States to help you make a selection of the best one for you. 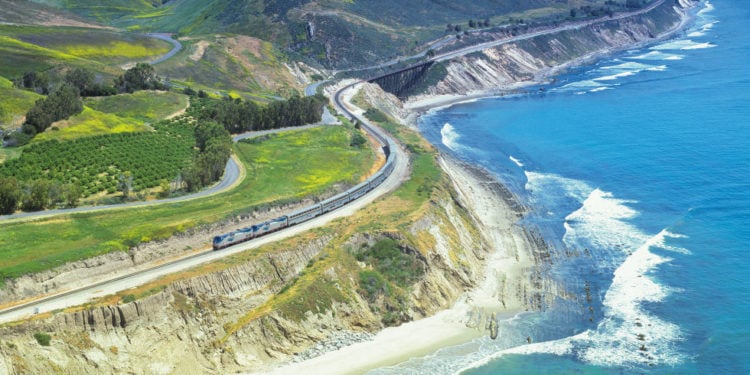 Most people who have taken the Coast Starlight train journey will tell you that it is the most scenic ride among all the others. It is the perfect getaway for anyone who just needs to put reality at bay as it takes about 35 hours and runs between Seattle and Los Angeles.

The train passes through the rugged terrain of the Pacific Northwest, the breathtaking mountain forests in Northern California and at the spectacular central coast. To break the monotony of having to stare out the window for 35 hours, the ride features an array of entertainment options.

These ranges from a movie theater, a dining and observation car and for those whose journey can never be complete without booze, the free champagne and wine tastings will help make the trip even more memorable. 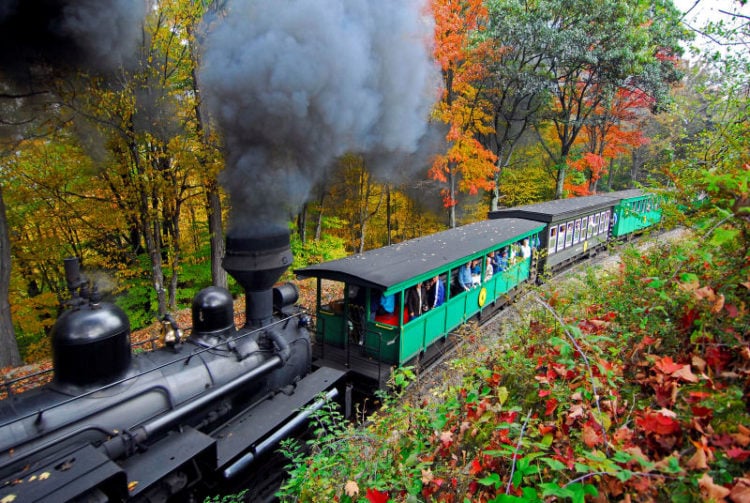 Go for a trip down memory lane by going on this train journey which uses the original locomotives which were used to transport logging flats to the mining camps. The eight miles journey passes right through the ancient town of Cass which makes you feel as if you are back in time.

The steam locomotive also billows smoke just like it used to which goes on to add that 100 years back feeling and is the most romantic getaway for you and your spouse. However, ensure you take a few sweaters and warm clothes as temperatures tend to misbehave at Bald Knob.

Get the firsthand experience of West Virginia’s wild world and a sweeping view of the mountainous region. It begins at Cass West Virginia, goes through Whitakers station, Bald Knob and ends at Cass taking about four and a half hours. 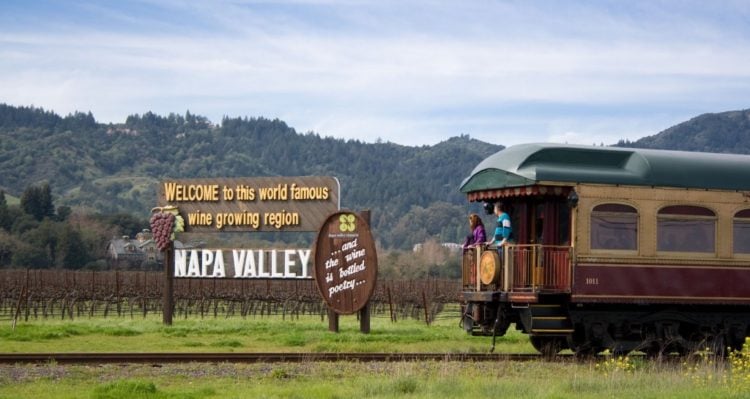 Get hypnotized by one of the world’s best wine while enjoying the rich agricultural scenes and beautiful vineyards on the Napa Valley wine train. The three hours journey which begins at Napa Valley and ends at St Helena is set to leave you yearning to go back again thanks to the friendly staff, onboard entertainment and if you want wine tours. To make it even more convenient, it runs all through the year which means you can enjoy going during the low season to make the most out of it. 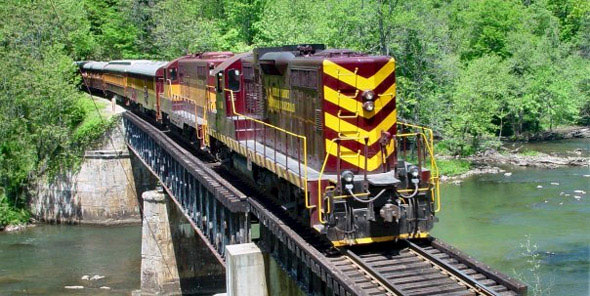 The great smoky peak is a gorgeous train ride in the US and is about 44 miles long. It runs from Bryson city to North Carolina. This journey gives you the opportunity to see a little bit of everything as it takes you through historical bridges, plush green valleys, through several ancient towns such as Tennessee and even over the Nantahala rivers and the Fontana Lake and into the epic gorge. It is an all in one trip which leaves a mark in your mind.

Passing across one of the seven wonders of the world, you and your loved ones have the opportunity to see the majestic scenery for yourself and have stories to tell when you go back home. The ride is like taking a trip down memory lane due to the vintage train and a lot of onboard entertainment which makes you forget you are traveling in the first place. It is a 60-mile trip which begins in Arizona and ends in the Grand Canyon South Rim and vice versa. 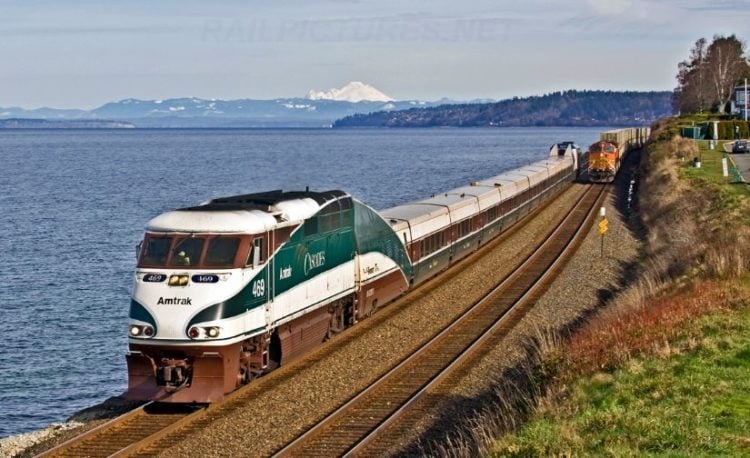 Running from Eugene, Oregon to Vancouver and approximately 156 miles, this train journey is not for the faint-hearted ones. Nevertheless, even with it being lengthy, there is plenty of onboard entertainment which will engage you so much that you will not notice you have arrived at your destination. The cool evergreen forests and the breathtaking Olympic mountains are set to leave you with your mouth agape so don’t forget to carry your best camera with you to take some of the beauty on this train journey home. 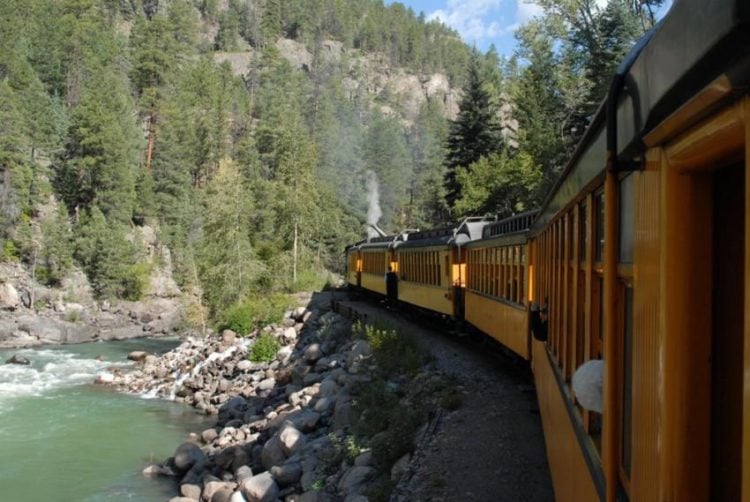 As the name suggests, the ride is from Durango to Silverton and is approximately 45 miles. It involves a lot of sightseeing, and the spectacular Colorado snowcapped peaks will make you want to retake the trip. It has that ancient feel due to the early nineties steam locomotive and the narrow railway gauge tracks. If you are afraid of heights, then this is the time to face your fees as the trip goes up to 3000 feet high. It also passes through an abandoned mining camp, old roads and even by the Animas River. 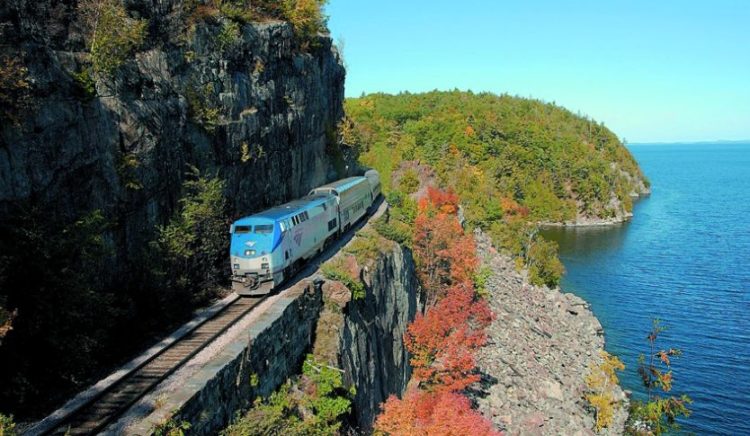 Running from New York through Saratoga Springs to Montreal, the 10 hours train journey is also an epic way to go for a holiday or weekend getaway. It passes along the majestic Hudson River Valley and through some beautiful towns which boast a long string of mansions which will leave you envying the owners. The scenery is all natural and quiet with the Adirondack Mountains and the Bannermans castle ruins. 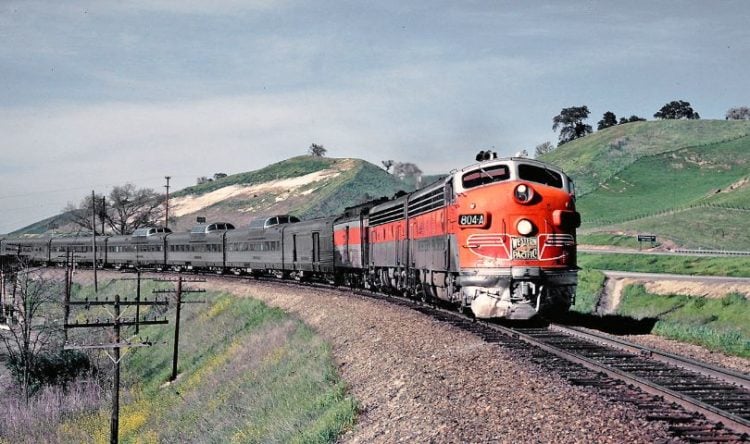 Running from Chicago to San Francisco through the Omaha, Denver, Salt Lake City and Reno, the California Zephyr is the ultimate way to have a glimpse of most of the famous cities in the US. It features the Rocky Mountains, the unique red rocks of Utah, the Sierras, Ruby Canyon and most other breathtaking natural scenes which will leave you appreciating nature. It is approximately 2438 long hence offering you a satisfactory view of the scenes and lots of onboard entertainment. 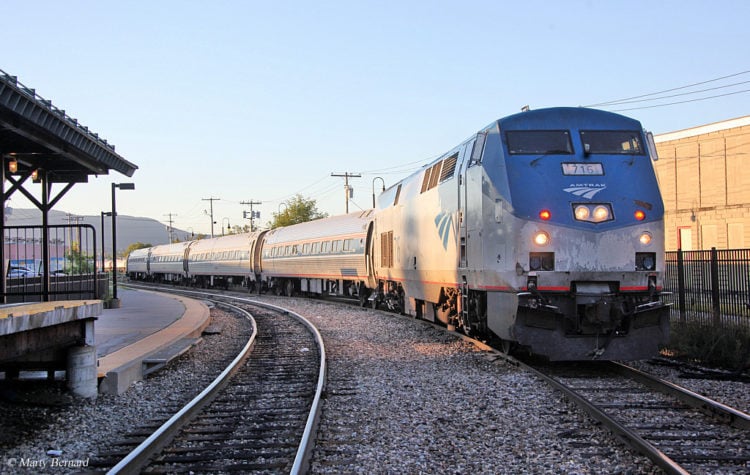 Like most of the above train journey, this is nothing but spectacular and deserves you spending your money on it. It is a five to six hours journey from New York to Vermont full of some serene views such as the Green Mountains, Saratoga Springs, and Hudson Valley. And if you are a person who adores skiing, you get a view of some of the skiing sites where you can come later and enjoy, and New York’s vast wilderness. If you have never taken a train journey before then, the Ethan Allen Express is among the best ones to start with. 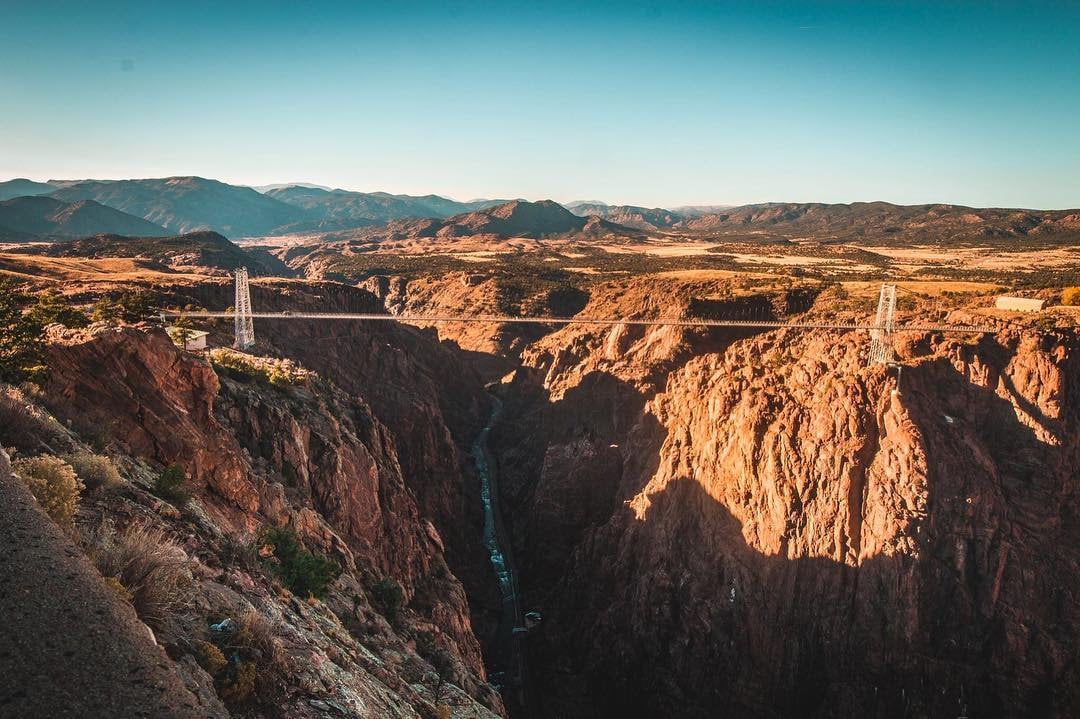 Connection is so vital to community, and a bridge serves as the ultimate connector between many places in the United States. There are literally hundreds of thousands of bridges throughout the nation that range in… 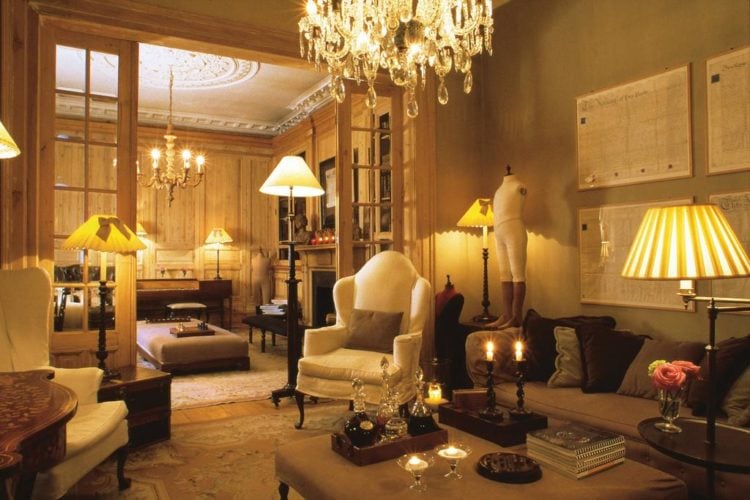 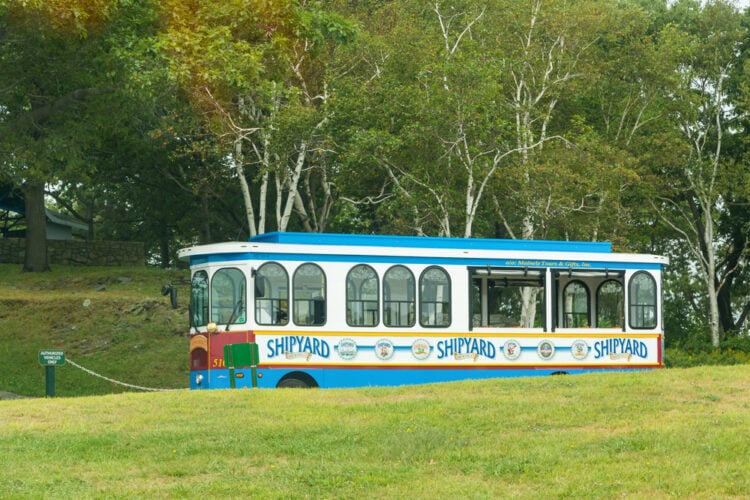 Cape Elizabeth is a town in Cumberland County, Maine, United States. This town is in Southern Maine and is a part of the Portland-South Portland-Biddeford, Maine metropolitan statistical area. The town is located on Casco… 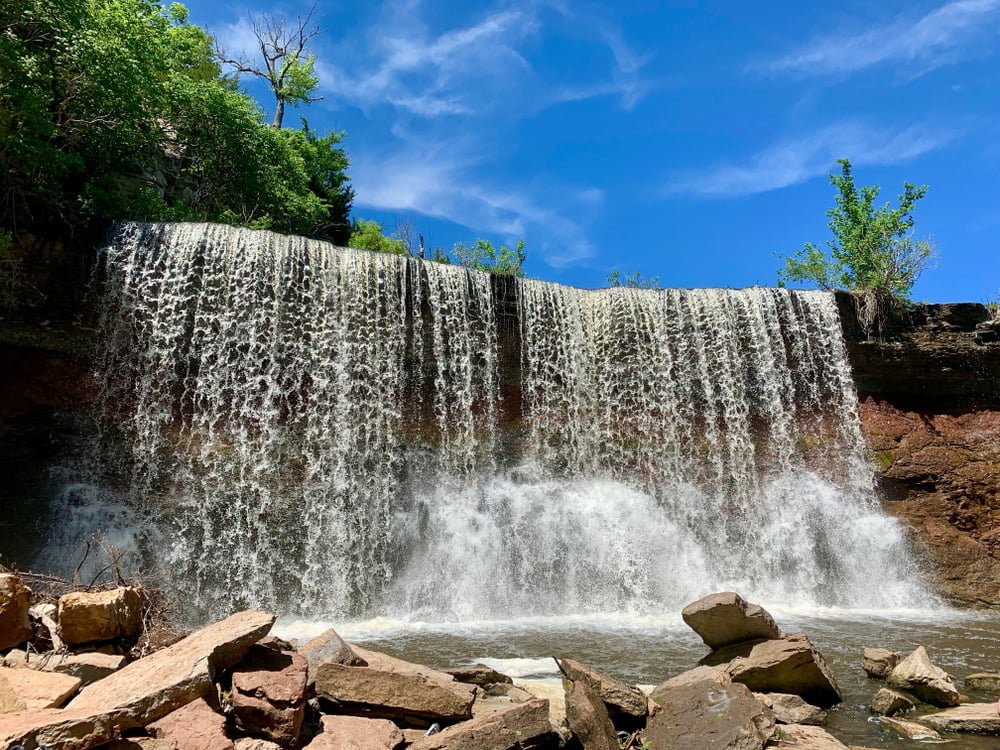 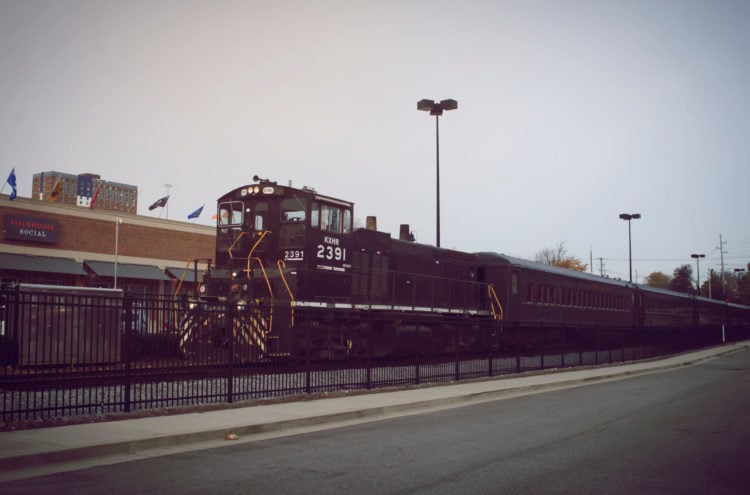 Knoxville is an amazing city to visit if you are planning a vacation to Tennessee. This city can offer a variety of experiences to suit people with different tastes, as there are activities and attractions… 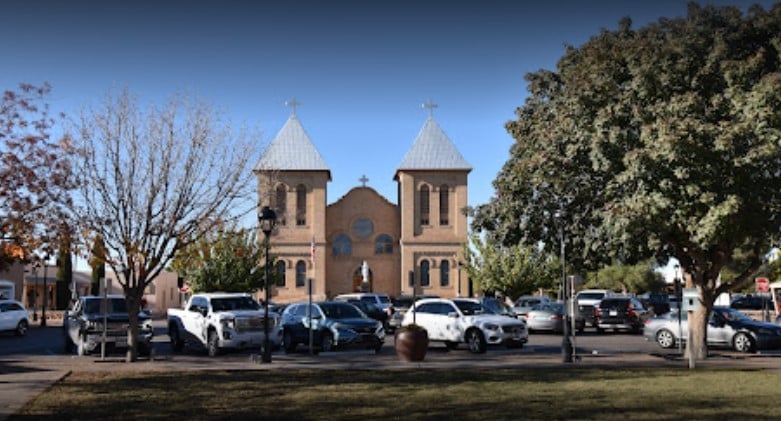 The Land of Enchantment that is New Mexico is full of fascinating locations. Rich in culture and heritage, Las Cruces is the state’s second largest city. It sits just about 3 hours south of Albuquerque…