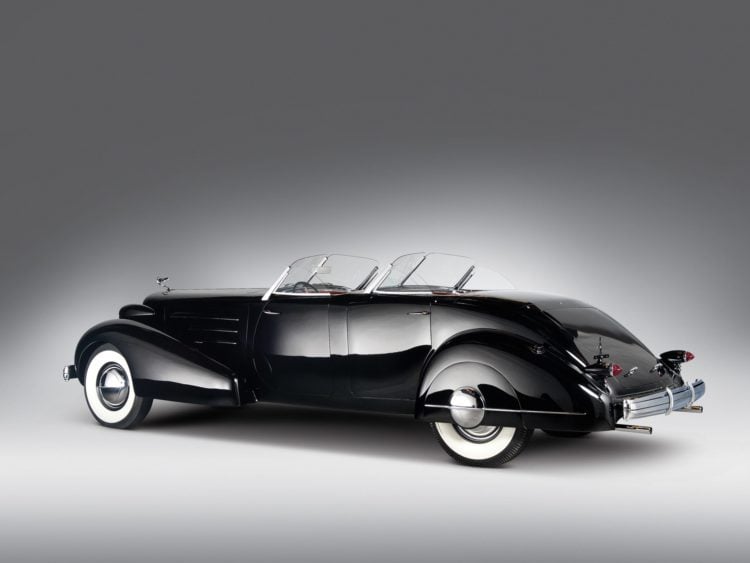 Sotheby’s held an auction for a 1937 Cadillac Sixteen Custom Phaeton on February 25, 2012. The extremely unique car sold for an impressive auction price of $962,500, coming in just a little shy of a million before applicable fees and taxes. This was, of the recreation of a concept car that was discovered in Cadillac archives. This example was built in the 1980s from the information that could be gathered about antiquated plans. The inspirational vehicle makes one wonder about what the original vehicle was like when it was first produced. We researched the history to discover 10 things you didn’t know about the 1937 Cadillac Sixteen Custom Phaeton, for your enjoyment.

1. The builder had to find the original blueprints

The 1937 Cadillac Phaeton model 5859 was a customized vehicle that was made by coachbuilder Fran Roxas. This was a true labor of love as Roxas had to obtain original blueprints of John Hampshire, a designer for Cadillac. The originals were created so long ago that much has disappeared into obscurity and there has been considerable thought and problem-solving going into the recreation process for a car that was never put into production. While investigating the history of this antique vehicle, we learned that Fran Roxas not only had to obtain the original blueprints of the car, but he also made reference to the original sketches that were made. This process involved looking at the sketches along with the blueprints, then comparing them and making some educated guesses about some of the features of the original intentions for the vehicle.

3. This was a unique Depression-era car

The 1937 Cadillac Phaeton 5859 came from a time when the country was in an economic Depression. It was a four-door luxury convertible sports car that was under consideration to be offered to the public as a custom ordered vehicle in the 1930s. This would have limited the sales to those who were financially able to pay the price.

4. The Phaeton has an imposing presence The 1937 Cadillac Phaeton 5859 is based upon the limited number of models that were custom ordered for buyers in the 1930s era. It was designed with a wide body that simultaneously offered a sleek exterior. The convertible was designed with four doors in a sports car styling.

The example that was built by Fran Roxas gained a great deal of international attention among rare car enthusiasts. It was placed on display at the Concours d’Elegance at Pebble Beach as a one of a kind model. People came from all over to catch a glimpse of this one-off Cadillac luxury sports car. We also discovered that the 1937 Sixteen Phaeton 5859 served as the inspiration for a newer Cadillac model. The design for the Ceil concept car was taken from elements of the 1937 Phaeton. The Ciel is a hybrid electric car that made its first appearance at Pebble Beach in 2011. This is where vintage automotive meets modern design.

7. This car is a one of a kind vehicle

The director of Cadillac design, Clay Dean gave his comments on the 1937 Cadillac Sixteen Phaeton in a press release. He described it as being “literally unlike any other vehicle ever built.” He further ventured that the design team at Cadillac has been inspired by this and the Roadster 5802 as they move forward with plans for the upcoming fleet of Cadillacs.

8. There are good reasons why the Phaeton was never built According to Hemmings, there are good reasons why the 1937 Cadillac Sixteen Phaeton was never built. The first was that they would have been extremely expensive to built. It would have cost such a high dollar amount that it didn’t make economic sense to offer them at a time when the country as a whole was going through an economic depression. Money was tight and a custom-built luxury vehicle wasn’t at the top of most consumers’ priority list of things to spend their money on. The second is that it would have taken about 15 months from the time of the order for the vehicle to be completed and delivered. It was an amazing concept, but the timing for such a vehicle simply was off. It’s curious though, why it wasn’t picked up again when things returned to normal with the economy. Instead, the plans were archived as a novel thought that didn’t become a tangible creation until the 1980s.

9. The right buyer didn’t show up at Pebble Beach

When the 1937 Cadillac Phaeton was put on display at Pebble Beach, there was a lot of interest in viewing it, but when it came to buying, that was a different story. The price was considered to be exorbitant and there just wasn’t anybody present who was willing to pay the price at that time. This, however, was not the case when the vehicle was offered at a Sotheby’s auction. It was sold for a final bid that wasn’t far off from a cool million. There is every reason to believe that the resurrected plans of the Cadillac that was never built will serve as an inspiration for more Cadillacs in the future. There has already been one concept made from elements of the old blueprints. This was a vehicle that was dreamt up at the wrong time in the history of the brand and the economic status of the country, but a reimagined version of the car has shown us that there is a great potential for a resurgence in interest in the customized dream car that has a value of near a million dollars.