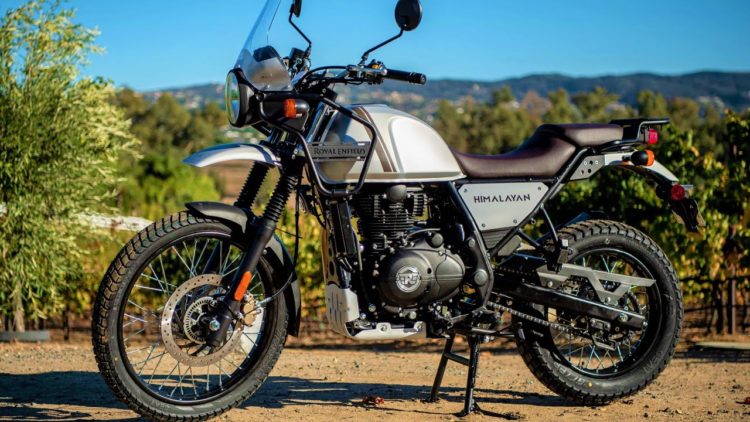 The Himalayan entered the North American market in 2018, and since then, it has continued to provide style, versatility, and capability in its adventure bikes. Over the few years, the $5,000 bikes have received regular updates, such as improved kickstands, revised rear brakes, and switchable ABS. The 2022 Royal Enfield Himalayan is no different, and its catalogue of changes is probably the most extensively made by the company. Let’s take a closer look at what this small-displacement bike has to offer:

One of the most noticeable changes in the 2022 Royal Enfield is the top rack, which has been made more streamlined. Although its surface area is smaller than that of the previous model, it increases the bike’s maximum load-carrying capacity to 15.4 lbs. from a previous 11 lbs. The company – Royal Enfield – says that this upgrade was crucial to riders that had been asking for more carrying capacity. Royal Enfield has also adjusted the crash bars on the side of the bike’s tank that prevent them from hitting your knees during a ride. This reshaped design provides more legroom, enough – in fact – for taller riders to have a smooth, comfortable ride. Additionally, the bike’s windscreens now come with a slimmer middle and wide base that create a flowing design aimed at optimizing wind protection. The new windscreen shape also leaves more room for the bike’s all-new Tripper Navigation – an exciting feature that we will look at later. Long-distance drivers will also love the 2022 Himalayan’s new seat design. Besides a more padded seat form, the saddle also features a more angular design for maximum comfort.

Contrary to what many people believe, the crash bars on the 2022 Royal Enfield Himalayan are not cosmetic. They are actually some of the strongest on the market. They provide actual protection for your engine, and recent upgrades have improved them. Besides your safety, other physical upgrades to this small-displacement bike – such as the additional carrying capacity – can help reduce maintenance costs for riders that use bad roads. The previous rack design had a bend that was unsupported and could easily brake if you applied too much pressure on it.

Arguably the most exciting upgrade to the Himalayan is the addition of the new Tripper Navigation device to the bike’s dash. According to the official Royal Enfield website, the device is powered by Google Maps and the Royal Enfield App to offer riders turn-by-turn directions. Unlike our phone, you don’t need to bolt the device to the handlebar or hold it in your hand. Its strategic placement also ensures that you keep your eye on the road at all times. The Tripper Navigation Device is round and gauge-shaped – designed to fit perfectly into the dash. Its TFT-like display includes a large arrow that indicates the direction of the turn as well as numbers indicating the remaining trip distance and distance to the next turn. Since it is powered by Google maps, the device should be familiar to most riders. You will need to download the Royal Enfield app, which you will use to control the device. It is crucial to note that the device will always try to redirect you to direct routes as it is limited to primary dirt roads and streets.

Himalayans are small, sleek bikes with a classy, signature design. Royal Enfield is every particular about aesthetics, and most Himalayan fans will love that this rings true for the 2022 Royal Enfield Himalayan. In one of the new colour options, the bikes have a brown seat cover, brown stripe, and Mirage Silver livery that give them a classy, premium look. You can also pick the Granite Black option that blends glossy and matte black hues perfectly or the Pine Green. The latter is great for paramilitary environments. That said, if you wish to remain true to the classics, the bike will also be available in the colour schemes used in the previous models – Gravel Grey, Lake Blue, and Rock Red.

Has the Performance Improved?

Unfortunately, despite the impressive colour palates and highly useful physical upgrades, the 2022 Himalayan does not offer many performance improvements. The engine is still a 4-stroke, single-cylinder with 411cc displacement, 23.6 ft-lbs torque capacity at 4000 rpm, and 24.3 horsepower at 6500 rpm. Additionally, the fuel capacity remains at 4 gallons, which gives the Himalayan a distance range of around 200 miles. The ground clearance and seat height also remain unchanged at 8.6 and 31.5 inches, respectively. That said, nobody has complained about the bike’s performance yet.

Some reasons to purchase a 2022 Royal Enfield Himalayan include:

Possible pitfalls of this bike include:

The 2022 Royal Enfield Himalayan embodies changes to its top rack, seat, crash bars, and windscreen without losing its sleek design. While some users will be disappointed at the lack of performance improvement, the physical changes make for a great riding experience all the same. Are you ready to purchase the new Himalayan? Hot Cars reports that the bikes will be available in the United States at $5,299. Since only a limited number will be shipped, it is a good idea to preorder your new bike early.