Home
Motorcycles
What is a Modular Motorcycle Helmet?
Prev Article Next Article 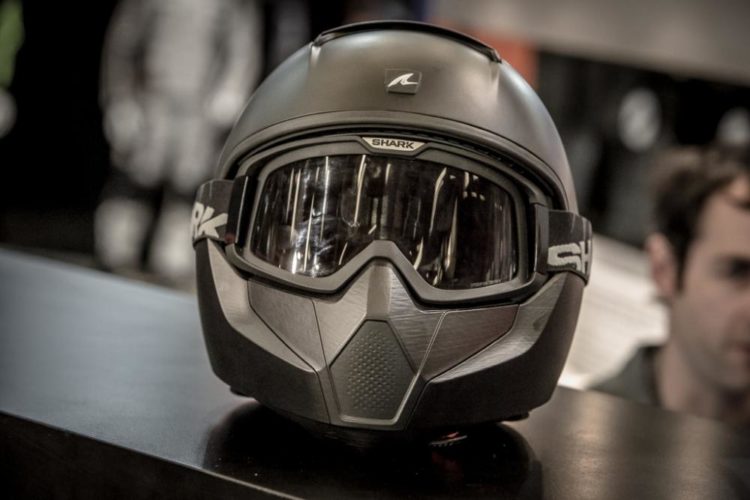 The modular motorcycle helmet actually has the capacity to be both an open face and a full face motorcycle helmet, depending on what the rider decides to do with it at any particular point in time. It has a chin bar that can be completely removed, often with the touch of a single button. This chin bar, when removed from the modular motorcycle helmet, allows that helmet to effectively become an open face design. In that mode, it covers the head and ears, leaving part of the forehead and the rest of the face exposed all the way down to the chin. Conversely, the rider can replace this chin bar and lock it in place. In that position, the helmet becomes quite similar to a full face helmet as far as design and appearance goes. The difference is that it isn’t a single piece, because of the removable chin bar.

These types of helmets are very easy to use. As previously mentioned, they typically only require the touch of a button in order to be converted from one form to the other. When the chin bar is raised, it simply raises up in almost exactly the same fashion as the visor would on any other motorcycle helmet that incorporates a full face design. As such, there are no moving parts that have to be taken off of the helmet and then kept up with in order to be replaced later. Furthermore, it doesn’t obstruct the rider’s field of vision because it sits high enough on the helmet to stay out of the way when it’s not in use.

Perhaps the biggest benefit of the modular motorcycle helmet is the fact that it provides options to any rider. They’re not stuck with a helmet that’s always open face or full face. This makes these types of helmets a popular choice for riders who wear glasses, those who are going on longer rides and want to be able to get a sip of water without taking their helmet off in order to do so, or those who simply feel too restricted with a full face helmet that has to be completely removed in order to get some fresh air. These helmets also tend to protect riders better than open face helmets, especially when you consider the fact that impacts to the face can be severe in a motorcycle crash.

Of course, there are some potential disadvantages associated with modular motorcycle helmets as well. One of the biggest disadvantages is that these helmets have a tendency to be quite a bit heavier than even the full face helmets. The mechanism that is used to raise and lower the chin bar adds a considerable amount of weight. This may not be anything that bothers most motorcycle riders, but it’s definitely noticeable for anyone that hasn’t been wearing a modular helmet long. Just like some riders simply can’t tolerate a full face helmet because they feel too claustrophobic to do so, others have a difficult time tolerating the overall weight of the modular helmet. This can be even more problematic for someone who has had previous injuries to their neck or even their shoulders, as the added weight can cause a great deal of pain. It’s also important that motorcycle riders think about this added weight when going on longer rides, as the extra weight may not seem like much on a shorter ride, yet it can grow exponentially more uncomfortable when that same helmet is worn for several hours at a time.

Which One Protects Riders More?

If you’re wondering which type of helmet offers the greatest amount of protection, the answer is almost always the traditional full face helmet. Remember, this type of helmet has been around since the 1960’s. It’s been well tested, both on and off the track and it has a solid track record for protecting motorcycle riders. Open face helmets do not have the same solid track record. Imagine what it would be like to be involved in a motorcycle crash, going over the handlebars and impacting the road surface directly with your chin when it is unprotected. As you can imagine, this is far from a pleasant experience and it can do a great deal of physical damage.

As far as the modular helmet is concerned, many would agree that they are better than open face helmets, yet not quite as good as the full face version. Again, it comes down to the fact that the full face helmet is made as a single piece, aside from the visor, which can be raised or lowered. The chin bar on a modular helmet can sometimes present challenges because it is hinged. Since it’s designed to be raised and lowered and it isn’t made directly into the rest of the helmet, it is possible for this bar to become disconnected in a severe crash. Obviously, this could potentially result in severe injury. In addition to having the chin bar move at the worst possible time, there is also the possibility that it could actually be pushed in towards the chin, doing even more damage than what might have been done with an open face helmet. Generally speaking, modular helmets are considered safe. It is something that has to be considered by the motorcycle rider in order to make the choice that each individual feels is right for them.