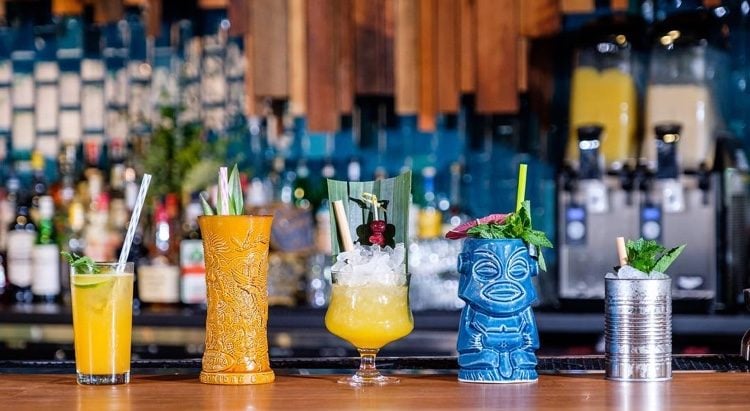 The tiki renaissance continues to sweep the U.S., with tropical bars popping up at a rapid clip. On the heels of pioneers like Smuggler’s Cove in San Francisco, the rum wave has spilled over into markets large and small, from Denver hot spots to more offbeat watering holes in cities like Tulsa and Arlington, Texas. Here are some of the coolest and most unique tiki bars to try in the U.S. right now. 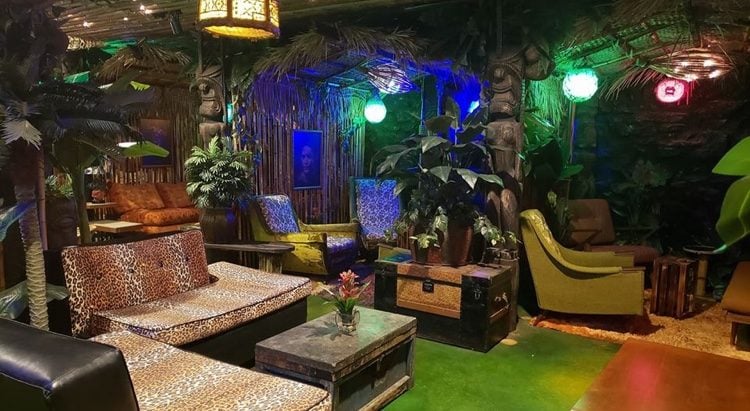 Hidden below Hopcat in Kansas City, Missouri’s bustling Old Westport neighborhood, TikiCat deserves a seat among the finest bars of its kind. The colorful haven is tucked behind a hidden door by the downstairs bathrooms, accessed via doorbell. Once inside, guests will find a lush, beachy paradise bedecked with fronds, funky artwork, ambient lamps, bamboo and the Creature From the Black Lagoon, immortalized in a frame by the bar. The drinks are serious business, too, as Smuggler’s Cove owner Martin Cate oversaw the creation of the menu. In addition to timeworn classics like Mai Tais, Painkillers and Fog Cutters, house originals include the “Tradewinds” cocktail made with rum, apricot and coconut; “Cautionary Tale” with gin, orange curacao, allspice dram, cinnamon syrup, lemon and lime juices and a ginger liqueur-cinnamon egg white foam; and the “Cat Bird Seat,” which has three types of rum, blackberry brandy, orange curacao, Demerara syrup, lemon and lime juices and orange bitters. 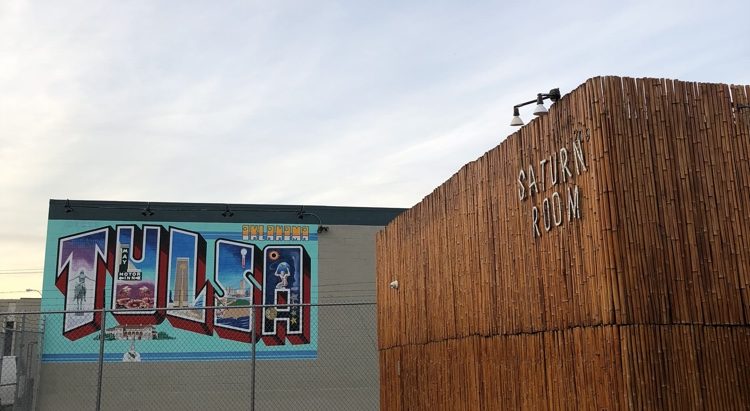 Tulsa, Oklahoma, may not seem like the most obvious place to find a tropical paradise, but the Saturn Room delivers with its unexpected treasure trove of quality libations and island vibes. Located in the Brady Arts District, the bar is a real eye-catcher with its thatched bamboo exterior and the massive adjoining “Tulsa” mural outside. There’s a huge patio, connected to the interior bar with a few stools, but for the full Saturn Room experience, you gotta saunter indoors. Partly named for the Saturn cocktail, a classic tiki tipple, the bar mixes up expert interpretations of well-worn favorites like daiquiris, Navy Grog and frozen Blue Hawaiians. Don’t miss the Saturn Signatures, though, offering inventive novelties like the tequila- and mezcal-based “Lil G,” along with allspice, grenadine, hibiscus tonic, grapefruit and acid phosphate. “I Can Show You the World” is another fun one, so named for the fragrant jasmine (get it?) stepped with cachaca, lucuma, falernum, macadamia nut liqueur, coconut cream, pineapple and milk. 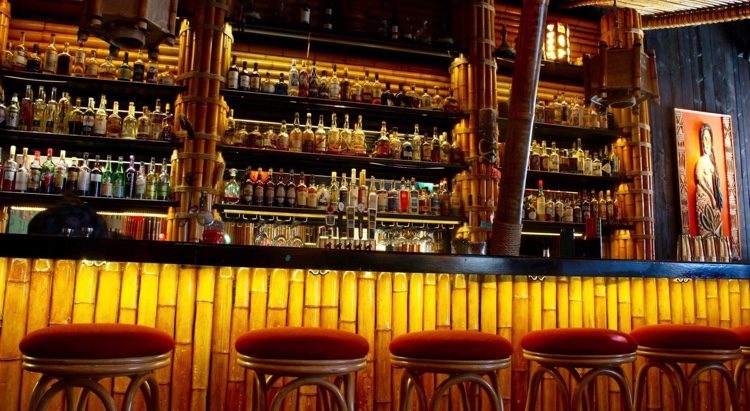 This Polynesian powerhouse feels like a coastal cave, outfitted with dimly lit nooks and crannies, anchored by a show-stopper of a bar. Here, dexterous bartenders fill up custom-made tiki mugs with boozy punches, frozen drinks and reimagined classics. The “Adrift Old Fashioned,” for instance, riffs on the bourbon mainstay by adding single barrel rum, espresso and coconut to the equation. Unexpected—and untraditional—ingredients like absinthe, cassis, lychee and even pho-spiced Arrack all make their way into drinks here, exhibiting some serious finesse from the barkeeps. If you like to drink your dessert, the “Macadamia Nut Chi-Chi” is a frozen medley of vodka, macadamia nuts, pineapple and coconut, with the option to top it all off with a shot of chocolate rum. The bar also sports an impressive food menu, which echoes the tropical drinks with plates like curry chicken, guava BBQ baby back ribs and tuna poké with tamari vinaigrette.

As far as tiki bars go, the vibe at Seattle’s Navy Strength isn’t quite as transportive and exotic as some of the other marvels taking shape around the country. That’s because bartenders here let your tastebuds do the traveling, via an immersive lineup of unique creations unlike any other tiki temple. Apricot, coconut and green chile join forces in the “Fortress of Solid Dunes,” while bourbon, mango and kalamansi mingle in the “Butuan City Soundtrack.” Of course, classics like Jet Pilots and Fog Cutters get their dues, and there’s even a Saturn slushie. The aspect that most sets this place apart, though, is its ever-changing travel-inspired menu section, which changes twice a year to offer cocktails inspired by a specific country. Currently, the Morocco-inspired offerings include the “Maghrebi Mint Sour” with Moroccan mint tea, rum and vanilla; and the “Fennec Fox” with toasted pistachios, spiced dates, rum and amaro. 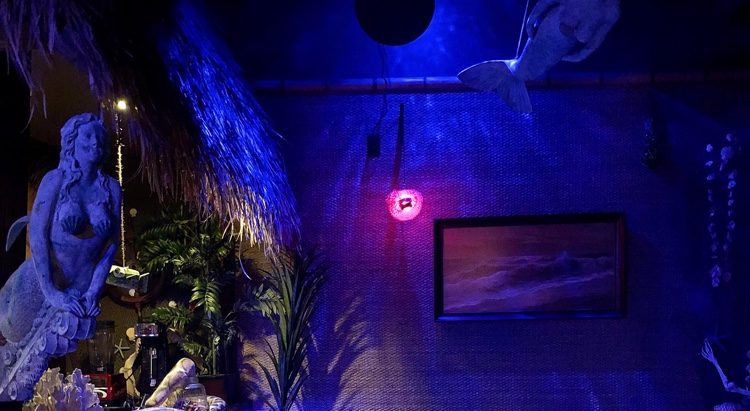 A stone’s throw from Dallas, this suburban strip mall bar feels worlds away. Or at least on the other side of the Caribbean Sea. The sultry space is outfitted with mermaid statues, island-inspired art and a bar resembling a beach hut, while dark purple and blue lighting help set the mood. The menu takes a playful approach, as friendly and informative bartenders shake up drinks like the “Canadian Castaway” (Canadian whiskey, imported maple syrup, falernum) and the “Lady Angelica,” with sherry, rum and passion fruit. There are also a few shareable punch bowls, like the “Release the Kraken!,” awash with spiced and white rums, banana, orgeat and fruit juices. 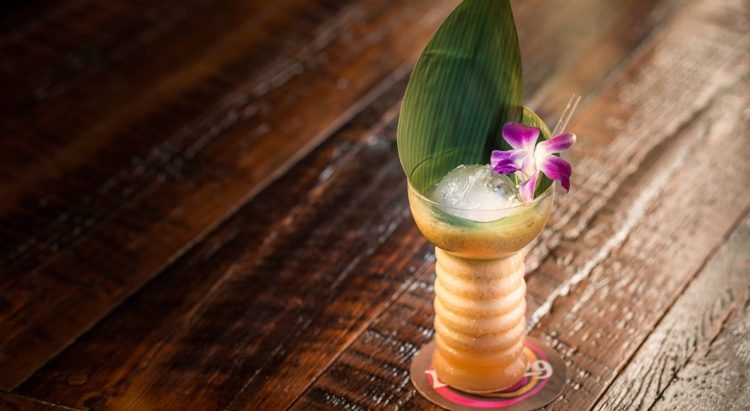 Of all the modern day tiki pioneers in the U.S., Jeff “Beachbum” Berry is right up there with the likes of Martin Cate. Here at his bar right off the frenzied French Quarter, he offers some of the best tiki experiences in the nation. The studious and meticulous Berry toiled for decades to discover and recreate classic tiki recipes and traditions, many of which are on display at Latitude 29, and prime for consumption. For example, the “Nui Nui” derives from a 1937 recipe by Don The Beachcomber, here revived as a silky-smooth rum punch. Similarly, the “Suffering Bastard” boasts Dutch gin, French brandy, lime cordial, bitters and ginger beer, in homage to the first of its kind recorded in 1942. Berry has also proven to be an expert at invention, with New Orleans originals like the “Pontchartrain Pearl Diver,” an iced buttered rum made with honey-butter-spice mix, passion fruit and Jamaican rum (pictured). And the vodka-based “Mississippi Mermaid” with tamarind, allspice, lemon and banana.

Three Dots and a Dash, Chicago 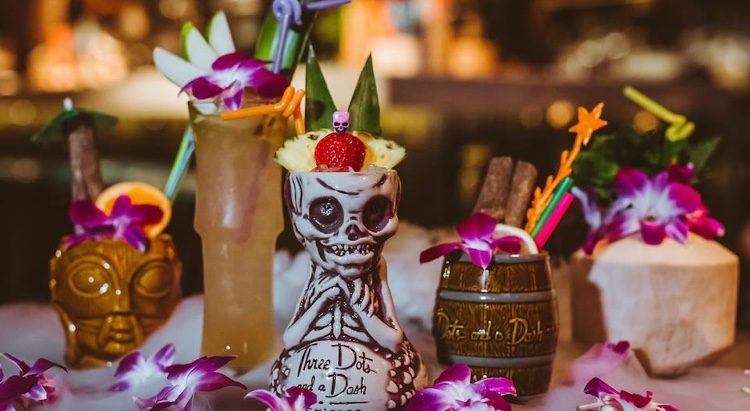 Few bars in the U.S. have had the tiki-revival impact that Three Dots and a Dash has had. Since bursting onto the scene in Chicago’s River North, the subterranean sensation has remained at the forefront of must-visit destinations for tiki diehards, right up there with Smuggler’s Cove and Latitude 29. The bar is accessed via a torchlit alleyway behind Bub City, then down a set of stairs under a wall of glowing skulls. The whole thing is very Pirates of the Caribbean, but with less swashbuckling and more swilling. Inside, the cavernous bar enamors with its cozy alcoves, bamboo-clad bar, beachy soundtrack and its extensive library of rums. Now with mixologist Kevin Beary at the helm, the illustrious menu is more polished than ever, offering a wide array of classics alongside masterful originals. The humbly named “Bourbon Cocktail” contains bonded bourbon, Jamaican pot still rum, rolled oat orgeat, Madeira, lemon, cinnamon and allspice in a barrel-shaped mug, while the “Fat Bottom Mermaid” blends banana-clarified rum, tangerine, pineapple, strawberry, Fassionola and Aperol. The “Saturn + Negroni” is another stunner, combining two classic gin cocktails in one colorful glass. 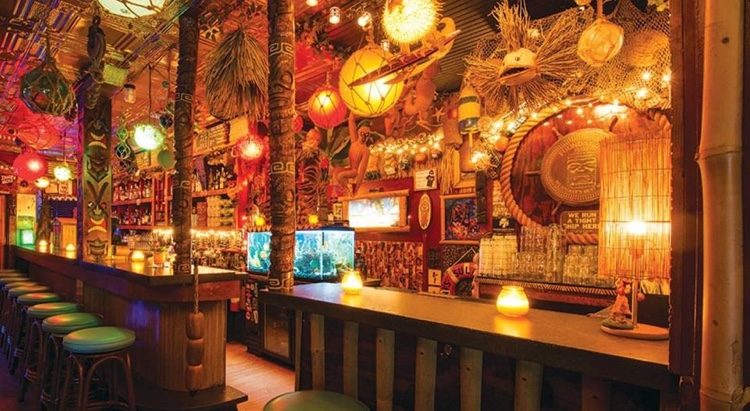 Even before the onset of trendy tiki bars, staples like Milwaukee’s Foundation bar have been delighting the masses for years. The elongated, dark bar hustles and bustles with loyal patrons and tiki fanatics alike, both of whom pour over the affordably priced cocktails and ample rum list. It’s also got one of the longest drink lists you’re likely to find anywhere, covering the full gamut of classics (your Blue Hawaiians, your Jungle Birds) and novelties, like the “Bikini Kai” with gin, lime, orange, almond syrup and nutmeg. Most uniquely, the bar even has a hotel room upstairs, called the “Captains Quarters,” which can be booked on AirBnb.