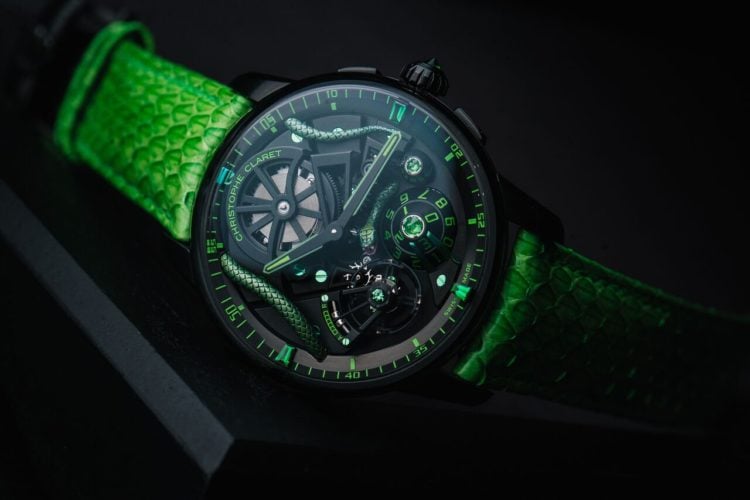 When designing the new watches, Christophe Claret was inspired by the wildlife, plants, and colors of the African Jungle. In the case of the Maestro Mamba, it was the green Mamba snake that lives in these jungles that were the main source of inspiration. This is clear in almost every element of the design of this watch.

Possibly the most striking feature of the watch is its strap. Christophe Claret went one step further than merely taking inspiration from the snakes of the jungle when designing this watch strap as it is actually made from the real snakeskin of a green mamba snake. This means the watch strap is hardwearing and practical whilst also being a visually appealing feature of the watch. Unlike many watch straps that are made of metal or a dull colored leather, this is a strap that catches the eye.

Christophe Claret then took the history of the snake to add additional design features. The green Mamba was once hunted on land that belonged to the owner of the biggest tsavorite mine in Mozambique. For this reason, the watch designers decided to use tsavorite gems as a design feature on the Maestro Mamba. These are particularly prominent alongside a diamond in the cone-shaped date display.

The dial of the watch is just as aesthetically pleasing as the strap. It is designed in such a way that the wearer and anyone who is admiring the watch is transposed directly into the African jungle. It has a multi-dimensional construction and most of the moving parts are visible through the watch face. It gives the impression of a snake slithering through the jungle undergrowth as amongst the moving parts is a snake crafted from pink gold and then coated in green SpectraCoat. The addition of the snake feature really seems to bring this watch to life and adds an extra dimension. The dial is covered by a stunning sapphire crystal dome and comes in a 42 mm diameter black PVD-treated grade 5 titanium case. While this is quite a large watch, it does not appear overly cumbersome on the wrist and the extra space means that the features of the watch are easily visible. Without the hands, the thickness of this watch is just 10.5 millimeters.

Despite having a whole new design, the mechanical aspects of the watch are pretty much that of the original Maestro. It still has the mechanical hand-wound caliber DMC16 and this has a pretty impressive power reserve of seven days. It also displays the date in a cone, with the top section indicating tens and the lower section showing the single units. Despite this being a novel method of displaying the date on a watch, it is surprisingly easy to read.

Another feature that remains the same as the original Maestro is the Memo-function. This means the wearer of the Maestro Mamba can use the watch to remind them of important events or special occasions. A further feature of this watch is the pointer-type display of the hours and the minutes.

Although it has a bold appearance, the complexity of this watch is apparent when you take into consideration that it has a mind-blowing 346 separate components and is adorned with 33 jewels. Other interesting points to note about the Christophe Claret Maestro Mamba are that it has a Swiss lever escapement and a balance-wheel with countersunk screws that has an oscillation frequency of 3 Hz, or 21,600 vph. Furthermore, it has stepped and Skeletonized Charles X-style bridges, a skeletonized barrel, and 26 interior angles.

As the Christophe Claret Maestro Mamba is such a stunning watch, there will no doubt be a battle for watch-lovers to purchase their own. However, there may be many disappointed people as there are not many available. The Maestro Mamba is a limited edition piece and Christophe Celeste has made just 28 of this model and comes at a price that reflects both the scarcity and the beauty of the watch.