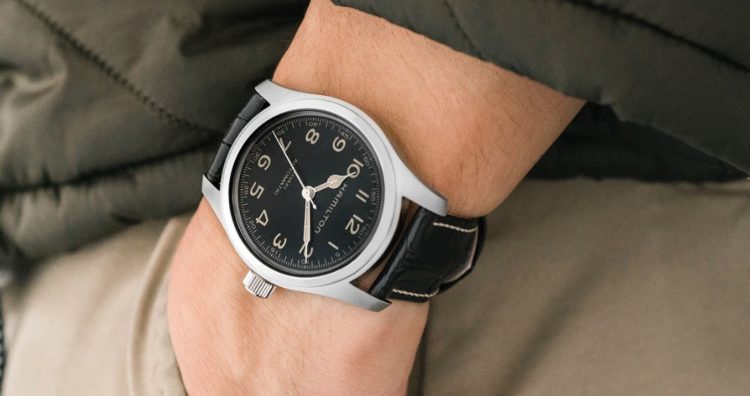 Hamilton watch manufacturers were privileged to have one of their models featured on the wrist of a character in the hit film “Interstellar.” The model that appeared had been in production for just five years and it was a gift to Murph Cooper by her father Joseph who was a NASA Pilot as he was preparing to leave the atmosphere and embark on his mission. Under this inspiration, the watch developed the symbolism that depicts a father’s love for his child. The character tells his daughter that they’ll compare the timekeeping upon his return to discover what, if any effect space travel has upon time, but little did he know that the watch would serve as a way for the two to communicate with one another. Yes, it was a Hamilton model that became known as the Murph by fans of the film. Hamilton has made a reproduction of the original piece that we are compelled to take a second look at. The Hamilton Khaki Field Murph bears the nickname given to its predecessor that became famous after the release of the film.

It is with intention that the Hamilton watchmakers designed the new Khaki Field Murph to resemble the original. The only departure that the new model makes is an update to the seconds hand. They have thoughtfully applied a section of lacquer dots along with dashes which run through the length which creatively spell out the work “Eurkeka!” in Morse Code. This confirms the notion that the watch is based upon its famous ancestor and the new Khaki Field Murph is worthy of a closer look and inspection. 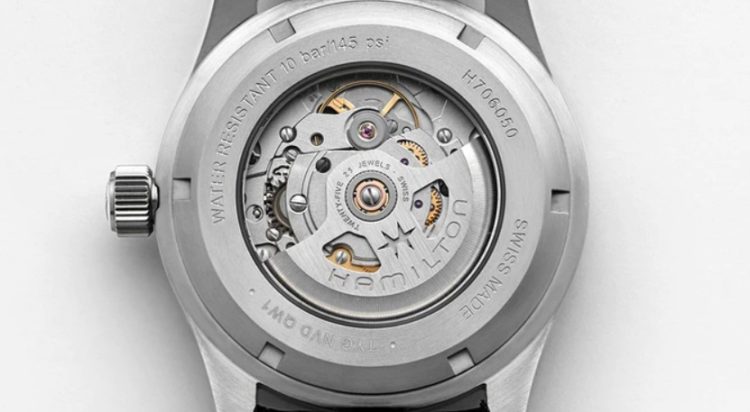 The Khaki Field Murph has a round case that measures 42 mm in diameter and it is crafted of stainless steel in a brushed finish. The thin smooth bezel that encircles the upper part of the watch adds a subtle contrast to the case on either side with a slightly polished finish, not quite mirrored finish but somewhere in the middle. It’s just enough to add a slight color and texture contrast.

When you flip the watch over you’re in for another treat. We see a matching brush finished stainless steel case back which is complete with engravings that give you a few of the specifications of the watch along with the important notation that the movement is Swiss Made. The center of the case back features a round cutout exhibition window that shows off the inner workings of the power source with a stainless steel plate protecting the vitals and a flat sapphire crystal providing a see through exhibit while protecting the delicate movement.

The dial of the Khaki Field Murph provides a deep and inky black background that you would expect to find in deep outer space. It allows for the brilliant contrast of the applied hour and minute markers which have applied lume to make them pop out in a 3 dimensional effect on the dial. this is one highly legible watch in a classic styling that nods its head towards classic vintage designs.

The movement is an automatic winding style that is called the H-10 caliber. It’s a souped up version that features an 80 hours power reserve. he watch is water resistant for up to 10 bars.

The Hamilton Khaki Field Murph is scheduled to be released for sale to the public on March 4th of 2019. It’s just a few weeks away. It’s important to not that the manufacturer is planning to release a decent number of these watches so they are not considered to be a limited edition watch. The one thing that will make some of them a little more special though is the the fact that they will be offered in a limited edition packaging. A grand total of 2,555 of the editions will come with this special packaging that has been personally designed by Nathan Crowley, who is the production designer and award winner who was involved in the Interstellar film project. This is something that fans of the Interstellar film will find especially intriguing. It’s something new with reminders of the famed watch that has become a symbol of special relationships.