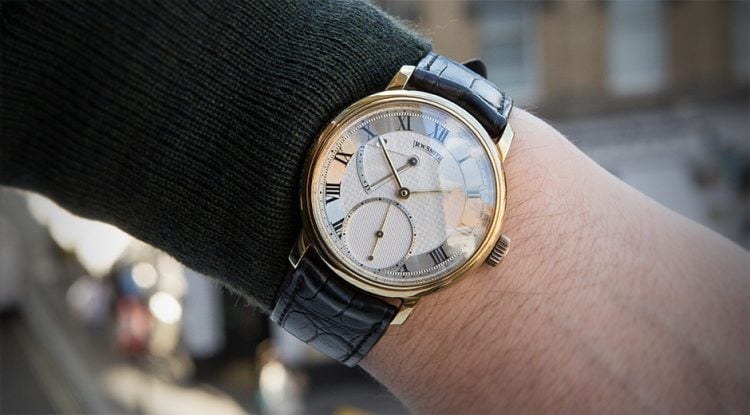 Dr. George Daniels is perhaps best known for his expansion of the double wheel coaxial escapement. His version did not require the use of lubrication, which was known to interfere with the accuracy of timekeeping. This innovation made him famous in the watchmaking industry. He was the only watchmaker known with the ability to create a watch entirely by hand with the exception of the hair spring. He has achieved the status as one of the great horological designers and inventors. His first project was a Marine Chronometer created in 1953. His first commissioned watch followed in 1970 and he continued making fine watches until his death in 2011.

Here is a collection of ten of the finest George Daniels watches of all time. 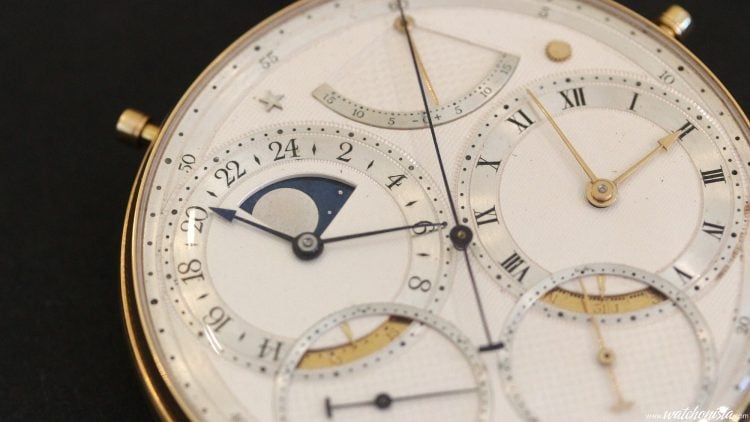 This watch was hand crafted by George Daniels to honor the men who flew into outer space in the space program for the betterment of all mankind. This circa 1982 model features an 18 Karat yellow gold chronograph with Daniels’ signature independent double wheel escapement, sidereal and mean solar time, phase and age of the moon with the equation of time indications. 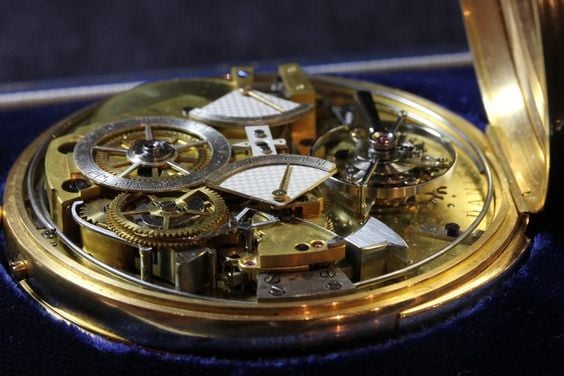 The Grand Complication watch was a masterpiece that contrasted to the simplicity exhibited in most of Daniels’ other creations. This grat achievement showed the complexity with which a horological genius could work and exhibited his mastery in grand style. One minute Tourbillon with ultra slim coaxial escapement. This watch is minute repeating with an instantaneous perpetual canlendar, moon phases, equation of time, thermometer and power reserve indication, circa 1987. 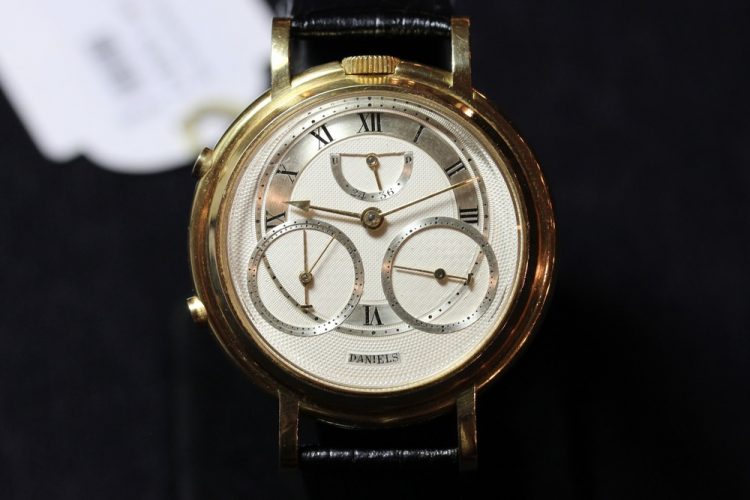 The first model that Daniels made that shows how well the coaxial escapement works for wristwatches. It also uses the compact chronograph mechanism. It was experimental at the time of this creation in 1991 and proved to be a great success. Four minute tourbillon wristwatch of 18 karat yellow gold with slim coaxial escapement and compact chronograph mechanism in an experimental phase of wristwatch development. 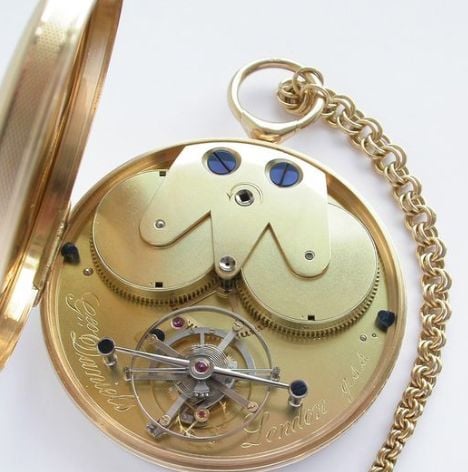 One of the first watches made by Daniels. Each came with the engravement of the intended recipient. Open faced one minute spring detent tourbillon chronometer watch in 18 karat yellow gold, made in 1970. 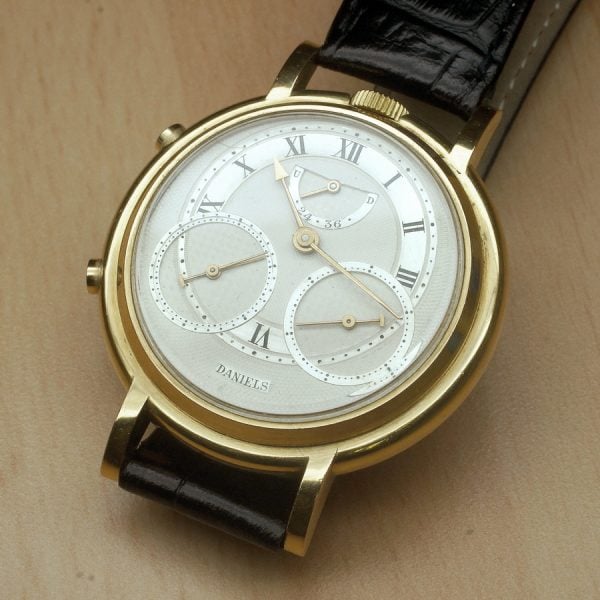 This watch was made in 1994 and was the last pocket watch model that was made by George Daniels. For minute tourbillon watch with compact chronograph and 48 hour power reserve. Crafted in 18karat yellow gold, open faced coaxial. 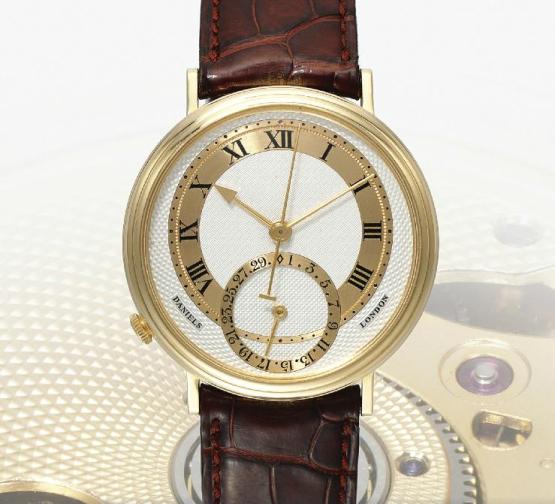 This watch was originally intended to be made with a limited number of twelve timepieces. It was made in commemoration of the pending millennium, in 1999. Demand became so high that Daniels had to enlist additional help outside of his workshop to meet the requests and fifty total were made. Wristwatch with an 18 karat yellow gold automatic center seconds and date with slim coaxial escapement. 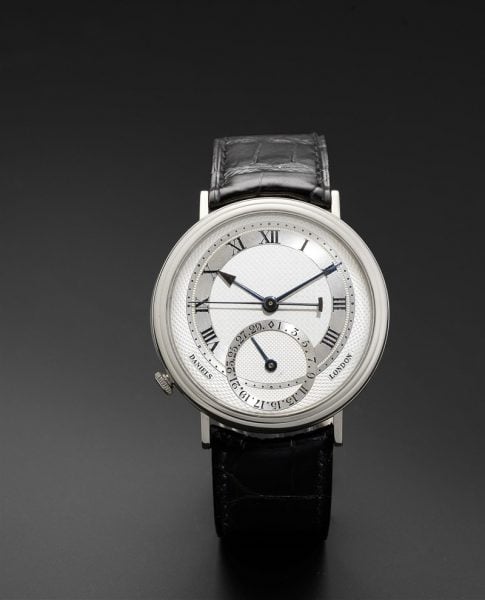 This watch affers the features of the Millenium Watch with the exception that is is made of white gold. Only seven white gold Millennium watches were ever made. Wristwatch with an 18 karat white gold automatic center seconds and date with slim coaxial escapement.

Designed by Daniels to show the flawlessness of the slim coaxial escapement. The original plan was to make twelve millennials based on this prototype. The difference between the prototype and the other millennials is the differential in size of 36mm versus 37.

The price for the prototype version of the 1999 Millennium is also less than the others. 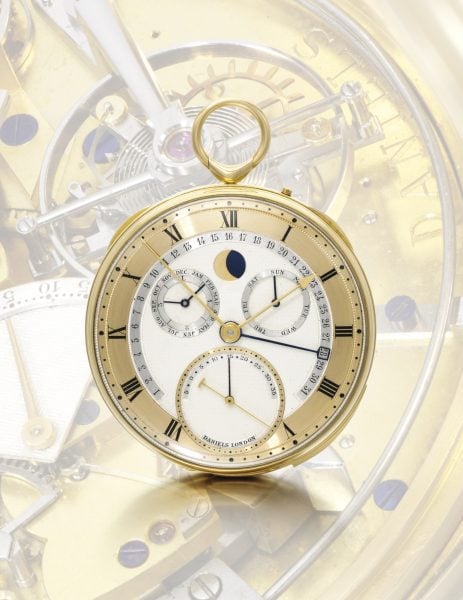 This watch was currently sold at auction for an astounding price of $1.464 million. It was predicted to sell between 800k and 1.3 million but it beat all records. 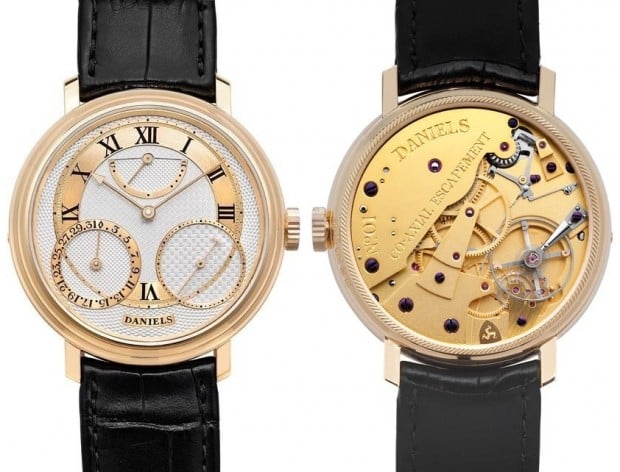 This watch was made by Roger Smith who worked with Daniels. It is made with the same standards established by Daniels himself. it features a manual winding with power reserve indicator, seconds dial and calendar similar to the tourbillon chronograph pocket watch finished by Daniels in 1994.

The dial is silver and features an 18 Karat yellow gold inlay with 18 karat yellow gold hands and a 40mm case of the same materials. Finished surfaces are frosted and gilded. It comes in a choice of tan or black straps. A limited number of 35 pieces have been made with a price of $224, 541 USD.