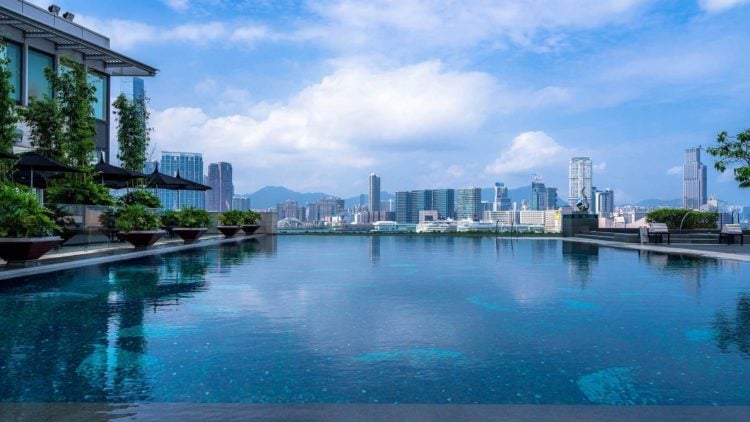 One of the world’s great cities, Hong Kong caters to both those on business as well as those with time to enjoy its many other attributes.  When choosing a hotel in any city, location is always paramount. The premier location of the Four Seasons Hotel Hong Kong ­­– adjacent to International Finance Center Mall (IFC), Exchange Square and Hong Kong’s sparklingly clean and efficient Airport Express train and MTR subway system ­­– turns location into perfection.  The Four Seasons Hotel Hong Kong has 399 impeccably decorated rooms and suites on 45 floors. They are exceptionally large, starting at nearly 500 square feet. Floor-to-ceiling windows provide sweeping views and luxurious, pillow-top bedding and high-count sheets guarantee the sweetest of dreams. 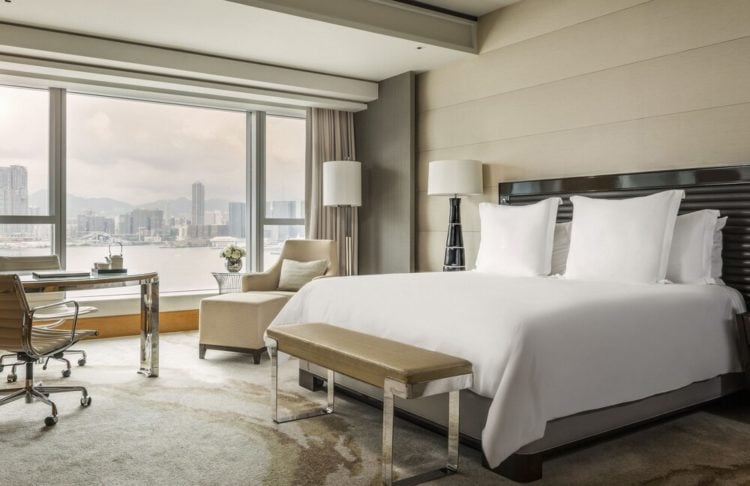 Bathrooms are likewise enormous with televisions strategically built-in to the mirror allowing one to catch up on news or a movie while relaxing in the oversized, delightfully long bathtub.  All of the hotel’s public spaces are elegantly chic without being stuffy.  The sixth floor sun deck with a large heated pool, secondary lap pool, Jacuzzi and cold plunge have harbor and skyline views that can be enjoyed from one of the massive, enveloping cabana-style day beds.

To best engage one’s inner Zen, one can take a Tai Chi class on the pool deck. Master William Ng who leads the class is a sprite, nimble octogenarian with agility, concentration and charm. The class is fun and easy to follow even for debutants. The state-of-the-art fitness center has equipment to tone muscles you didn’t even know you possessed while more floor-to-ceiling windows give the impression of running outside while on the treadmill.

After a busy day of conducting business or stealth shopping, nothing quite beats a “Perfect Pedicure” at the Four Seasons Nail Bar. With a flute of champagne, a leather massage chair and Victoria Harbor views, aesthetician Liz gave my feet a tune-up so complete that they were ready, willing and able to go another 100,000 miles. If you’re there mid-week, check out Whiskey Wednesdays, for a flight of 18-year-old single malt whiskies to whet your whistle with that manicure.

The afternoon before my return flight was spent in the Four Seasons Spa. With an Amethyst Crystal Steam Room, Soft Sauna, heated, half-moon shaped Vitality Pool, a Relaxation Lounge with loungers and mini, attached television sets with individual headphones, one could intentionally decide to miss one’s flight. 8 Finance St., Central. 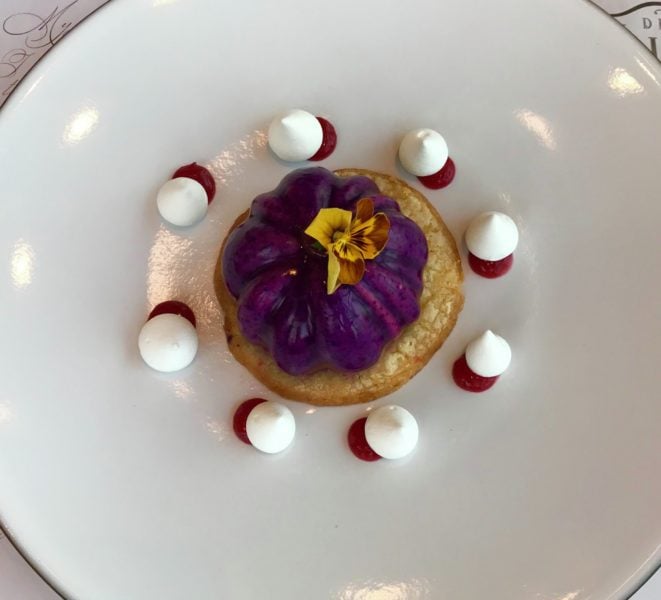 Hong Kong is a foodie’s fantasyland – a veritable cornucopia of classic Chinese food and all manner of western cuisine. The Blue Bar in the Four Seasons lobby possesses an Uber chic atmosphere and the perfect backdrop to gaze at Hong Kong’s beautiful people and is a regular stop for the island’s glitterati. The expertly crafted cocktails will quench one’s thirst and provide the perfect start to a great evening or a nightcap to end it. If you want something a little more intimate, the Caprice Bar on level six has a warm atmosphere and captivating water views.

Just opened, Hong Kong’s newest shining star is Dear Lilly at IFC Mall, the brainchild of Australian Ashley Sutton. Undulating flowers hang from the bar’s ceiling and dried lavender and chamomile flowers are perched everywhere. These compete with love letters and charming, amorous quotes strategically placed throughout to inspire beating hearts. Head Chef Bhupendra Singh’s creations will not just woo you, but will make you fall head-over-heels in love, if not with your dining companion, then most certainly with his honey-glazed prime beef short ribs served with pomegranate pearls. The tuna poke in sweet onion and avocado vinaigrette is also a winner.

Dieting will come another day, as the chef’s desserts were too beautiful to eat. However my spoon had other ideas. The purple Berriolette Dome with chocolate streusel and berries, and Dear Lilly Heart made of raspberry and white chocolate were both outstanding and well worth the extra hours required on a treadmill.  If in need of a snack while out and about, have dim sum at one of Tim Ho Wan’s four locations (IFC Mall, Olympic, Sham Shui Po or Tseung Kwan O). Started in 2009, it appeared in the 2010 Michelin Guide and now has locations around the world. Their signature pork buns do not disappoint.

Dining at the Four Seasons’ Lung King Heen was by far, one of the most memorable meals I’ve ever eaten in Hong Kong. No small wonder this Cantonese restaurant has been awarded three Michelin Stars. Indeed Chef Chan Yan Tak is the world’s first Chinese chef to earn three stars. Chef Tak has nearly a cult following and is revered by those who work with him. And for good reason: no detail is overlooked and only the freshest, highest quality ingredients are used. This is especially important since Cantonese cuisine is lighter than other Chinese cuisines.

The dim sum was, in a word, outstanding. Favorites were the signature baked barbequed pork buns, shrimp with bamboo shoots and steamed mushroom dumplings with lotus root. The steamed Star Garoupa with ginger and spring onions was fresh, tender and flavorful. The finale of this culinary symphony, the light and luscious chilled mango and sago cream pudding with pomelo made me swoon. 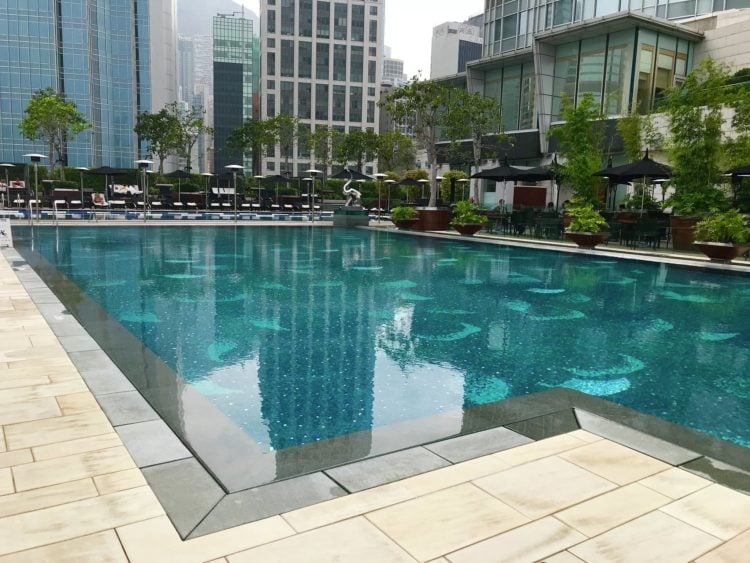 If you have an ecclesiastical devotion to shopping then Hong Kong is a religious experience equivalent to believers visiting the Vatican. There’s the Central’s IFC Mall or Causeway Bay’s Hysan Place, both with multiple floors of shiny designer shops. The antique shops and galleries of Hollywood Road also make for a great afternoon. For some of the best photographic art anywhere, pop into Yellow Korner. It will be hard to leave empty handed when faced of all that talent.

At the delightful Stanley Market, there are several art and clothing stalls. Just behind is an ethereal bay with colorful fishing boats and cafes and restaurants. The bus ride to Stanley from Exchange Square alone is worth the trip. Wide windowed, double-decker buses closely hug the hills along Hong Kong’s gorgeous coastline granting magnificent views amid towering, jade-colored trees. Make sure and walk to Stanley’s eastern-most edge through eco-reserve Ma Hang Park, and visit the fishing temple Pak Tai and the ancient well.

There are also several enjoyable outdoor markets across the harbor in Kowloon, including the Temple Street Market, Ladies Market and Jade Market. In all, bargaining is elevated to a Daliesque art form. If however one is a true believer who worships at the temple of shopping, then head to Shenzhen, which provides a shopping experience like few other locales. Just across the border in China, it takes about an hour from Hong Kong’s Central MTR Station. If traveling with a U.S. passport, a Chinese Visa is required.

To start, or if short on time, the Lo Wu Commercial Center is just yards away from the immigration exit on the right. Best to start on the fifth floor top and wind your way down. If you’ve been truly faithful, you may need additional luggage to haul your bounty back to Hong Kong, of course also readily available to buy at Lo Wu.

The best way to Hong Kong

Whatever brings you to Hong Kong, whether business or pleasure, you will sleep like a king, eat like a queen, and if you engage the retail gods, you will also part with a chunk of your personal royal treasury.  You will also without doubt, have a ball.