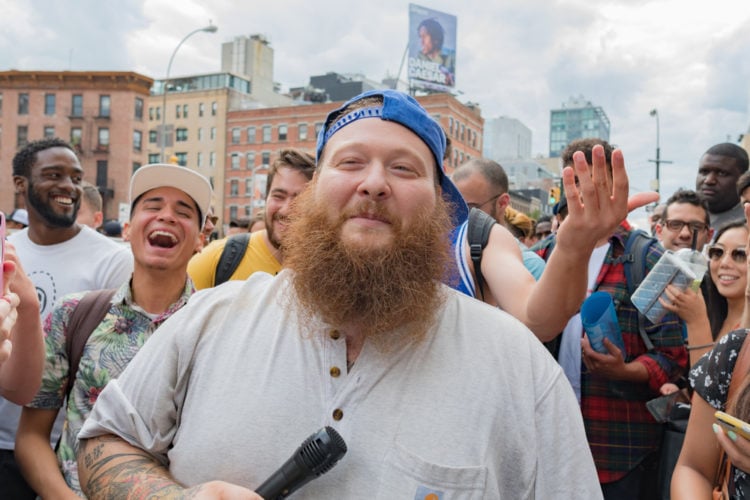 There aren’t many rap stars who can make a career rapping about their love of food, but then again, there aren’t many rap stars like Action Bronson. Bronson began life as a chef, only turning to rap professionally when a broken leg forced him out of the kitchen and onto the stage. But where one door closes, another opens, and in Bronson’s case, what a door that turned out to be. According to the latest estimates from Celebrity Net Worth, the foodie turned rapper has managed to build up the hefty net worth of $10 million over the past decade, a sum that might not be enough to make him the richest rapper around (with a fortune of $3.2 billion, Kanye West beats him by a clean mile) but which certainly makes him the kind of success story that’s worth hearing about. If you’re in the mood to do just that, then stay right where you are. Without further ado, here’s the story of how Action Bronson achieved a net worth of $10 million.

Back to the Beginning

Bronson was born in Flushing, Queens, New York City on December 2, 1983. After graduating Bayside High School, in Bayside, Queens, in 2002, he set about turning his lifetime love of food into a career. By the turn of the decade, he’d established himself as a chef. Rap was a hobby, but it was his cooking skills that bought home the bacon. And then, in 2011, disaster struck. Bronson (or Ariyan Arslani, as he was then known) slipped in the kitchen of the Queens restaurant he was working in. The doctor diagnosed a broken leg and prescribed a 4-month break from the kitchen.

But what seemed like disaster at the time was actually just Lady Luck knocking. “The light turned on,” he told The Atlantic. “The light just turned on and I went hard.” Over the next four months, Bronson devoted himself to turning his hobbyist rapping into a full- blown career. To say it paid off would be an understatement. In the years since, he’s established himself as an internet star, the producer of an almost insane number of albums, EPs, and mixtapes, and the only rapper around likely to use ‘gyro’ in a simile. But we’re getting ahead of ourselves. Between the fall and the fame lay several years of hard work, turned down record deals, and not a little controversy…

The Debut and the Breakthrough

In 2011, Bronson released his debut studio album Dr. Lecter with the independent record label Fine Fabric Delegates. Available via digital download and in CD-R via his official website, it generated a small amount of buzz but didn’t come close to a chart appearance. His follow up from November that year, Well-Done, and his 2012 mixtape Blue Chips fared similarly in terms of chart success, but managed to stir up enough interest in the industry to win Bronson a management deal with Goliath Artists, home to such huge names as Eminem, The Alchemist, Blink-182 and Danny Brown. Later that year, he was offered a lucrative contract with Sony, but turned it down in favor of VICE, a company whose multimedia angle seemed by far the better fit.

Over the next couple of years, he steadily built up his presence. His collaborations with the likes of The Alchemist, Domo Genesis, Earl Sweatshirt, and Vince Staples picked up enough interest for him to be offered the chance to perform at Coachella, along with a mention on XXL Magazine’s 2013 Freshman Class, a round-up of the day’s most interesting up-and-coming rappers. In May 2013, he moved to Atlantic; in July, he announced his major record label debut would follow in early 2014. Between there and then, he managed to fit in a tour with Eminem, the food-oriented web series, titled F***, That’s Delicious, and several more mix-tapes and collaborations. By the time his debut album, Mr. Wonderful, eventually broke on March 23, 2015, interest in Bronson was at boiling point.

With guest appearances by Chance the Rapper, Meyhem Lauren, Chauncy Sherod, Party Supplies and Big Body Bes and an army of high-profile producers behind it (including The Alchemist, Mark Ronson and Noah “40” Shebib), it would have been difficult for Mr. Wonderful not to succeed. But just how well it managed to perform was hard to predict. As Wiki comments, Bronson’s lyricism and production choices on the album were praised to high heaven by critics, while the public lapped it up to the tune of 48,540 streams and 43,564 traditional album sales. After becoming the third highest selling album in the United States on the week of its release, it entered the US Billboard 200 at number 7. Bronson, it seemed, had arrived.

Since Mr. Wonderful, Bronson hasn’t been sat around on his laurels. In 2017, he released Blue Chips 7000, followed by White Bronco in 2018. In September this year, he released Only for Dolphins, an album Pitchfork describes as “his most eclectic album yet… a triumph of Bronson’s omnivorous musical taste”.

If there’s one thing Bronson can be accused of, it’s spreading himself too thin. While music may be what bought him to the world stage, it’s his numerous other activities (not to mention his love for cramming as many food references into his lyrics as feasibly possible) that have singled him out from the sea of other similar talents. Unsurprisingly, most of his non-music related ventures have centered around food. Between 2016 and July 2020, he hosted two foodie TV shows, the nightly talk show, The Untitled Action Bronson Show and the food travel show F***, That’s Delicious. In 2017, he capitalized on the success of F***, That’s Delicious by releasing a book of the same name. Other TV appearances have come via his short-lived comedy documentary series Traveling the Stars: Action Bronson and Friends Watch ‘Ancient Aliens’, and cameos in The Irishman (2019) and The King of Staten Island (2019).

Ten years ago, Action Bronson was working in a kitchen in Queens. Fast forward to today, and he’s one of the biggest figures in rap (although thanks to his recent 80lb weight loss, only in the figurative sense). By combining hip hop with food culture, he’s emerged as one of the most erudite, compelling, and unique artists on the scene… which may well explain that $10 million net worth.