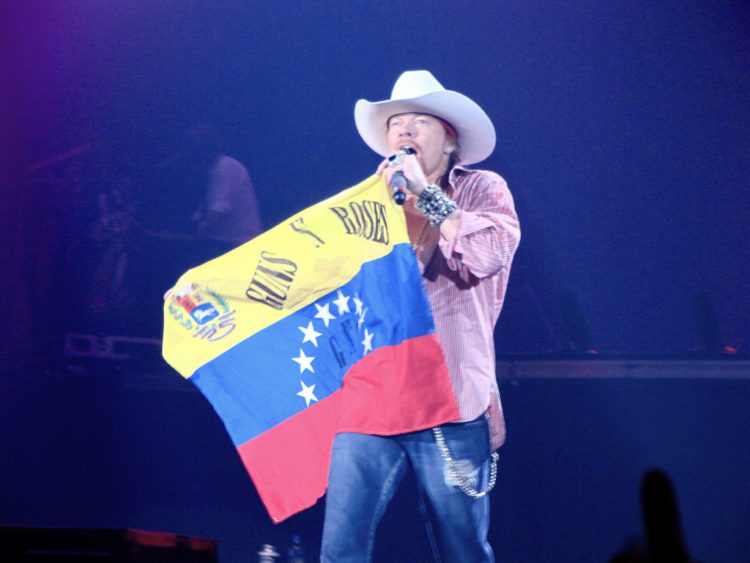 Rock and Roll artist Axl Rose is an iconic member of the band Guns n’ Roses. He made a name for himself as a member of the group, in the music industry. We recently learned that he has a net worth of $150 million. This is an astronomical figure, but how did he do it? Was it all from his career as a legend in music? We looked into his fantastic career and here is what we found out.

Axl was born in LaFayette, Indiana in 1962 and he was given the name William Bruce Rose Jr., after his father. When he was still just a very small child, his father took off and left his mother to raise the family by herself. He had a troubled childhood and numerous scrapes with law enforcement. He was the quintessential bad boy and he even did some time in jail for the crimes that he committed. He came to a crossroads in his life. It was time for his to make a choice between cleaning up his act or continuing forward with a life of crime. He decided that he didn’t want to keep breaking the law, so he moved to Los Angeles and joined a band. The name of the band was AXL, which is his stage name. In time he would legally have his name changed to W. Axl Rose.

Rose arrived in LA in 1982. He had to take what jobs he could to provide for his living needs and to keep him going in the music business. He took on several jobs and managed to make it work for himself. He formed a new band that he called Guns N’ Roses. In 1986 they released their first EP. The very next year their debut album was released with the title “Appetite For Destruction.” The album contained the song “Sweet Child O’ Mine which became a huge hit. This ended the poverty stage of Axl’s life. The band continued to churn out one hit after another and they made a lot of money on their numerous tours as well.

Rose has a unique stage presence

Axl Rose became very popular with the Guns N’ Roses fans because of his animated and lively performances. He had a unique and charismatic persona on the stage and it filled the auditoriums where the band performed during their concert tours. Many sold out tours kept the money rolling in. The band took a serious chill during the late 1990s and they all went out to do their own thing. It wasn’t a break up but they didn’t perform together none the less. Axl Rose along with the other members of the Guns N’ Roses band were 2012 inductees into the Rock & Roll Hall of Fame.

Rose and the band got back together in March of 2016 and made the announcement that they were going to embark on 21 city tour. The event began in June of 2016 and ran through September of 2017. This was yet another boost for the band that never really broke up officially, they just seemed to take a break from their main action to focus on their personal lives and solo careers. This was good news for dyed in the Wool Guns N’ Roses fans who had been hoping that the band would reunite.

Rose is a celebrated musician

In addition to the scores of fans who follow Axl Rose’ activities as a solo artist as well as member of Guns N’ Roses, other important people within the music industry have given him the recognition that he has earned. The band was nominated for American Music Awards as well as Grammy Awards on multiple occasions. They walked away winners of Best Heavy Metal Album, Favorite Heavy Metal/Hard Rock Artist and Best Heavy Metal Song awards.

Where did Axl make his fortune?

There is no doubt about where Axl Rose has made his millions. It’s been through his long and successful career with the band Guns N’ Roses and the work that he’s done as a solo artist. He’s a celebrated rock artist who has made a fortune in his craft.