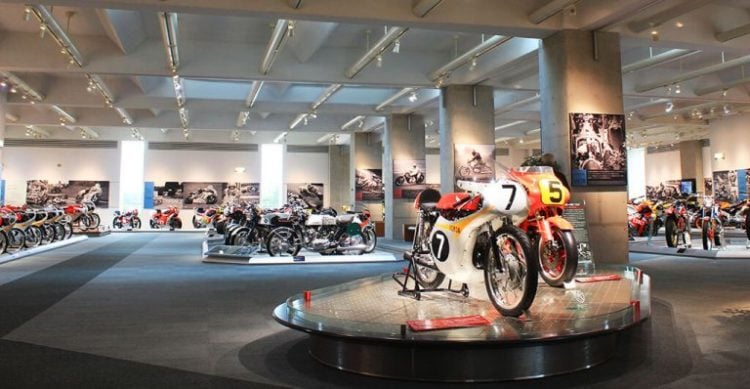 If you’re a motorcycle enthusiast, you’ll know that nothing beats the thrill of the open road. But once the ride ends, there’s still plenty of ways to indulge your passion. Over the last couple of decades, an increasing number of motorcycle museums have been popping up around the country, some of which are dedicated to one particular brand or genre, others of which celebrate the whole, glorious history of motorcycling. If you want to learn more about racing, engines, and the names and faces who’ve helped shape the industry into what it is today, a visit to one of these shrines of metal is well worth your time. if you want to check out the best of the best, here’s where to go.

Located in Pickerington, Ohio, the AMA Motorcycle Hall Of Fame Museum chronicles the history of motorcycling from its earliest days to the present. Along with a sprawling collection of bikes, the museum is also home to the Motorcycle Hall of Fame – a celebration of some of the biggest names in motorcycling, along with the unsung heroes who’ve helped shape the industry. As americanmotorcyclist.com notes, entry is free of charge to AMA members. Entry for non-members is $10 for adults, $3 for students, and $8 for seniors. Children under the age of 11 benefit from free admittance providing they’re accompanied by a paying adult.

Set in Maggie Valley, North Carolina, Wheels Through Time offers one of the best motorcycling experiences on the central East Coast. Created in 2002 by motorcycle enthusiast Dale Walksler, the 38,000 square foot facility features one of the biggest and best collections of rare and vintage American motorcycles (including board track racers, hill climbers, military bikes and more besides), memorabilia, and unique motors in the world. With over 300 machines to admire, the museum is a great place to take a visual tour of the evolution of American automation over the years. Open 360 days a year and with regular events sprinkled throughout the calendar, it’s a museum no motorcycle enthusiast should miss.

As the name suggests, the Harley-Davidson Museum is dedicated to all things Harley-Davidson. Its celebration of the history, culture, and changing technologies of the brand is showcased in an Engine Room featuring dozens of original engine designs, a Clubs & Competition exhibit that celebrates board track racing and hill climbing competitions, a peerless collection of Harley-Davidson motorcycles from across the ages, and a fascinating selection of memorabilia. Spread over a 20 acre, park-like campus and featuring a jam-packed schedule of events and activities, the museum promises one of the most memorable experiences a Harley Davidson fan could have.

If you’re a fan of big, burly American bikes, you’re going to love The Shop. The museum offers a superb collection of vintage U.S. bikes, with a particular emphasis on Indian, Harley-Davidson, Crocker, and Henderson. The collection may not be vast, but it’s big on quality. Once you’re done admiring the metal, head to the attached store for the chance to pick up some parts for your next project. With its weird but wonderful decor and its excellent supply of rare and hard-to-find accessories, it’s a great place to browse, buy and mingle with fellow enthusiasts.

The Motorcyclepedia Museum was built with the worthy aim of educating people about the history, culture, and evolution of the motorcycle. Thanks to its faultless collection of over 450 bikes and fascinating selection of motorcycle memorabilia, it’s achieved its mission statement with style. The collection focuses mainly on early-mid 20th-century American motorcycles, with a particular emphasis on Indian motorcycles. Featuring a model from every year of the original Indian company from 1901 to 1953, it’s a must-visit for anyone with a soft spot for the brand.

If you’re in the vicinity of Santa Barbara, a visit to the Solvang Vintage Motorcycle Museum comes highly recommended. It might not be the biggest motorcycle museum around, but its collection leaves nothing to be desired. Although every type of bike is represented to some degree, the focus is really on racing bikes, with a varied selection of motorcycles from the likes of BMW, Ducati, Moto Guzzi, Norton, Triumph and Vincent. The museum changes its display bikes monthly, with the result that there’s always something new to discover, no matter how many times you’ve visited in the past.

The National Motorcycle Museum is a privately owned, nonprofit museum with a fabulous collection of around 450 motorcycles. Along with the bikes themselves, there’s also a huge array of antique toys, photographs, posters, and other motorcycle memorabilia. Just a small sample of the exhibits you can look forward to include a painstakingly restored 1920’s Shell Gas Station, a barn find, and a small but exquisite collection of antique motorcycles.

If you’re as obsessed with cars, bikes, and planes as you are with motorcycles, don’t miss the Owls Head Transportation Museum. Along with its extraordinary collection of vintage and antique motorcycles, the museum also boasts some superb examples of pre-1940 aircraft, cars, engines and related technologies, including an awe-inspiring 29′ Rolls Royce Phantom.

2. The Rocky Mountain Motorcycle Museum and Hall of Fame

With over 70 restored vintage Indians, Harley-Davidsons, Excelsiors, Hondas, and Triumphs, The Rocky Mountain Motorcycle Museum and Hall of Fame is heaven for lovers of antique motorcycles. As Motorcycle Cruiser notes, what sets it apart from many other similar halls of fame is that instead of focusing on well-known faces, it celebrates the everyday people that have dedicated their lives to motorcycling. Once you’re done admiring the exhibits, the ride up to Pike Peaks via Highway 24 is a great way to burn off some steam.

Described by bigroad.com as one of the top motorcycle museums in the US, Barber Vintage Motorsports Museum is a must-visit for any two-wheeled fanatic. Its story started back in 1988, when a former car racer by the name of George Barber decided to turn his zeal for speed into the “best and largest” motorcycle collection in the world. After initially concentrating on restored racers, Barber gradually began to expand his collection to include production street bikes as well. Today, the museum boasts over 900 motorcycles from every era and genre imaginable, along with a very fine collection of vintage and modern race cars, numerous parts, photographs, and service manuals.