Omega is a watch brand that was founded in 1848. Through the many decades of its existence designers and craftsmen have been bringing the world some of the finest watches. They’ve been on a steady and consistent trajectory of innovation and development. The brand is responsible for the co-axial escapement, now common in watchmaking. as well as their development of the Master Chronometer program. Omega has long been a favorite of loyals to the brand for more than a century, with watches crafted to suit a variety of tastes and preferences. To celebrate this longstanding watch brand, here are the 20 best Omega watches of all-time.

This model was inspired by an earlier version of the watch made for Buzz Aldrin’s trip to the moon. The Moonwatch Professional Chronograph is an updated and more modern version of the hand-would caliber. It features a stainless steel case measuring 42 mm in diameter. The watch is powered with a Ref 1863 mechanical movement. The bracelet is made of matching stainless steel, however, it’s interchangeable with a leather strap also available. he dial is black with white markers and hands which contrast nicely. The three sub-dials occupy the lower portion of the dial also with highly legible white hands. The bezel is a unidirectional type with white indicators for the tachymeter. Push buttons for the chronometer are placed just above and below the central crown. This is yet another version of the Speedmaster Chronograph. The diameter of the case is smaller measuring just 39.7 mm across and is crafted of stainless steel. This was the model that accompanied Wally Shirra in his 1962 orbit of the earth. It’s powered with a Ref 1863 mechanical movement and comes with a leather strap. 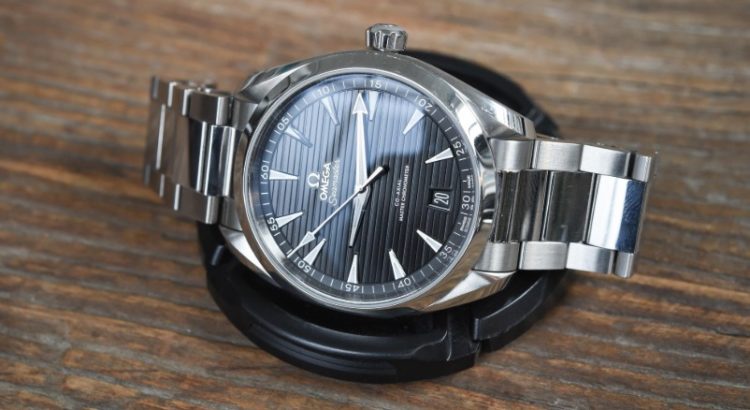 This model was dubbed the “Dark Side of the Moon.” It’s a more modern iteration of the Speedmaster but notably more expensive and built with premium high-performance materials. The case is made of carbon materials and it measures 44.25 mm in diameter. Ceramic and carbon materials give this model a more upscale value. It’s powered by a Ref 9300 co-axial automatic chronograph movement. The dial is black in color which sets up amazing legibility and contrast for the white lume treated markers, hour, minute and second hands. Dual sub-dials offer a 24-hour clock and a 60-second timer. The model name Speedmaster is placed directly under the white Omega logo at the 12 o’clock position in red lettering. strap is coated nylon fabric in black color. This model is also available in white and gray colors. The Skywalker X-33 was launched in 1998 in honor of our astronauts. This high-functioning watch features a titanium case measuring 45mm across, with a matching titanium bracelet. It’s powered by a caliber 5169 electronic quartz chronograph movement. functions include an ana-digi display, three alarms, countdown functions, a chronograph, multiple time zones, and other functions. The Omega logo is placed off to the side near the 3 o’clock position. 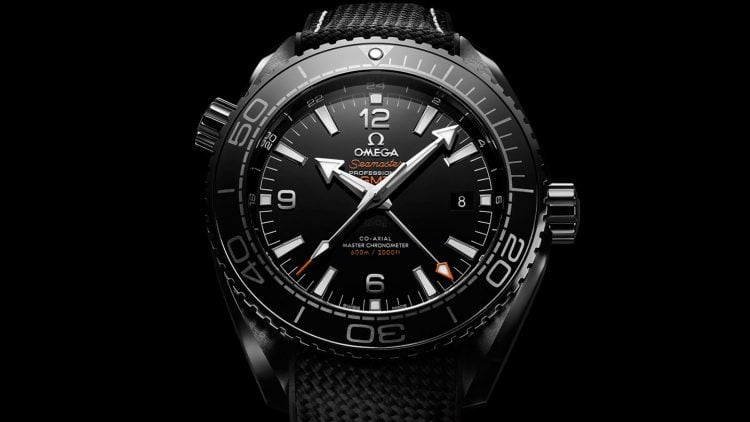 This model of the Seamaster collection features a colorful approach to aesthetics. It’s a larger version than the 300M, its predecessor with a 43.5 mm case made of stainless steel material. The water-resistance is 600M. It is powered by a caliber 8900 co-axial automatic movement with date and offers the functions of GMT, a chronograph and other functions. The most popular version of this model features stainless and orange contrast on the bezel and numerals against the white background. The nylon NATO strap is grey and orange with a stainless steel buckle. This watch is also available in other color options.

Larger than the 300M, twice as water-resistance, and offered in a bevy of variations that include carbon cases, a GMT movement, a chronograph, and more, the Planet Ocean is Omega’s most advanced dive watch collection. Orange has been a popular color, but given the multiplicity of options, there are few looks you can’t find within the Planet Ocean lineup. 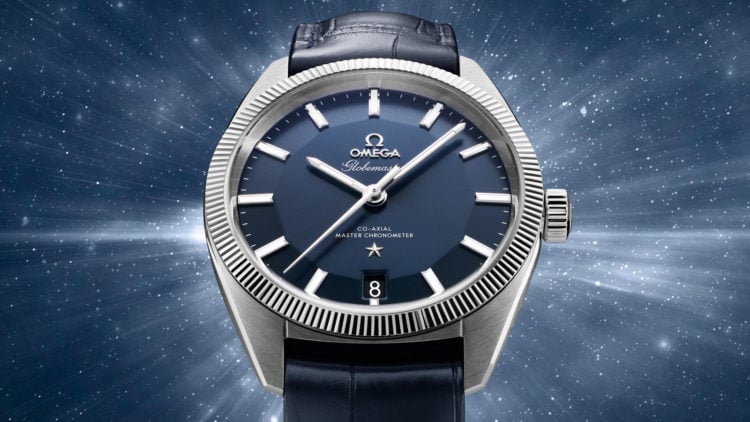 This is perhaps one of the most stunning vintage Omega co-axial watches with a case that is made of stainless steel and an overlay of gold patterned material for the bezel and a matching crown to the 3 o’clock side. The Globemaster is an elegant and luxurious dress watch measuring 39mm. It comes with a brown leather strap adn the movement is a caliber 8900 co-axial with the date. This model is available in the two-tone gold and stainless steel, an all-steel and a solid gold version. One of the more high-end specialty models, the DeVille Tressor Co-Axial features a 40mm case crafted in yellow gold material. The bracelet is genuine leather in a cherry red color that matches the dial. The markers, hour, minute, and seconds hands are all made of yellow gold, as well as the Omega logo placed just below the 12:00 position. This watch was made in celebration of the 150th anniversary of the brand and was fitted with a reference 8929 hand-wound co-axial time-only movement. 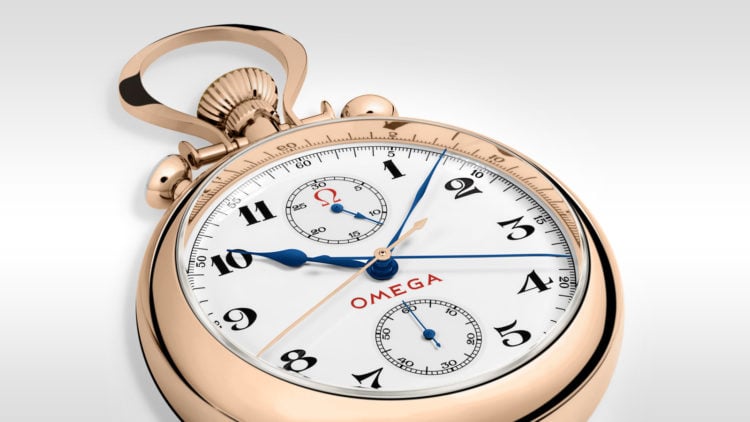 This model is a special limited edition which was created in 1932. It’s not a run of the mill production model as it was made in commemoration of the 1932 Olympics. It’s a rare collectible with a price tag commensurate with its rarity. The watch is made of white gold with yellow gold accents. This is a pocket watch style. This model was made famous as the watch worn by Pierce Brosnan in a James Bond film. It was followed by Daniel Craig in his portrayal of the famous agent in the 1990s. It’s a lovely yet novel timepiece made with a stainless steel case measuring 42m in diameter. At the 10 0’clock position lies the threaded helium escape valve giving it a different look. This watch is powered by a reference 8800 co-axial automatic movement with date, and it comes with a rubber bracelet.

The Speedmaster Day-Date MK40 Triple Calendar was first launched in 1993. This watch is a part of the Speedmaster collection with a new twist on the dial with indicators for day, date, month and a 24-hour indication. The case is 39mm in diameter fuitable for smaller wrists. The Seamaster Planet Ocean is a 2005 release launched to rais awareness of the need to save the planet. This watch is similar to the Seamaster Professional 300M, but it offers the capacity for 600M water-resistance, and it’s considered to be one of the best divers watches on the market today. This watch features a new co-axial movement and a helium release valve. The Aqua Terra is a part of the Seamaster collection. This is one of the dressier wristwatches made by teh brand. The model was first released in 2003 and found an immediate audience throughout the world. It’s one of the most highly recommended professional dive watches. The lines are simple and clean but it offers everything a diver will need. The Omega Constellation Grand Lux is one of the most beautiful models ever made by the brand. It’s a luxury timepiece that is highly valued by collectors. Precious metals were used in the making of the variants within this model. It was made available in platinum and gold materials with a sapphire crystal class. This is a 1960s model Omega which was made in collaboration with the COMEX company for the world-famous ocean explorer Jacques Cousteau. It’s a professional model released for sale to teh public in 1971. The watch features a monobloc case construction with water-resistance up to 600 meters. It’s powered by an in-house Caliber 8500 movement. It was outfitted with a red button indicating the bezel’s safety lock adn an unusual crown-locking nut. It was reintroduced in 2009 with double the water-resistance to 1,200 meters. The Omega Marine is a diver watch first released in 1932. The case bares a rectangular shape with the crown placement at the 12 o’clock position but recessed and hidden with a flip lock to preserve the tightness of the case pieces for water-resistance. This is a mode that has seen several variations throughout the years. It was also released in a Marine chronometer in the 1970s powered by a 2.4 MHz movement. This model is one of the more popular in the history of the brand with its black dial and wonderfully contrasting luminous hands and hour markers. It’s crafted in stainless steel for the case and bracelet with a polished and brushed finish on both. The aesthetically pleasing black watch features a transparent case back to reveal the inner workings of the movement inside. It’s covered on both sides with scratch-resistant sapphire crystals. The watch is water-resistant to 330 feet. Functions include hours, minutes, seconds, chronograph, tachymeter and calendar. This version of the Seamaster is among the best-selling. It’s made with a stainless steel case and matching bracelet with a unidirectional rotating black ion-plated bezel. The dial is black with luminous treatment on the hands and hour markers with red Arabic numerals for the 6,9, and 12 indications for a wonderful contrast. The movement is an automatic type and this watch is water-resistant up to 2,000 feet. This is one of the dressiest watches released by Omega. It features a stainless steel case measuring 38.5 mm with a crystal skeleton case back. The movement is a self-winding type with a co-axial escapement. The dial is a teak white mother of pearl with 11 diamond hour markers with water resistance up to 150 meters. This is one of the most beautiful and highly functional Omega watches ever made. The Worldtimer features a case made of stainless steel material, measuring 43 mm in diameter. At the center of the dial is a gorgeous globe indicating the earth and its beauty. This is one of the most magnificent examples of horology in the entire world. The Worldtimer offers a multicity time function. The watch is powered by an 8939 co-axial GMT Worldtimer with date movement. The strap is made of stitched 100% genuine leather in a brown color. This model was made in a few different variants featuring a variety of precious metals, all with marvelous color schemes promoting the theme of contrast. The most famous and popular Omega watch of all time is the Seamaster Planet Ocean 600M Diver Chronograph in Solid Red Gold. Aesthetically, it is the most breathtaking example we’ve ever observed. The case measures 45.5 mm and is crafted of expensive Ceragold/red gold. Omega took this model to its absolute limit as the red hue of this gold is among the most unique of all metals. The bracelet is made of rubber-backed alligator material in black color. Red gold accents the markers and hands and two subdials sit on either side of the lower portion of the dial. This watch is powered with a reference 9301 co-axial automatic chronograph with date movement.