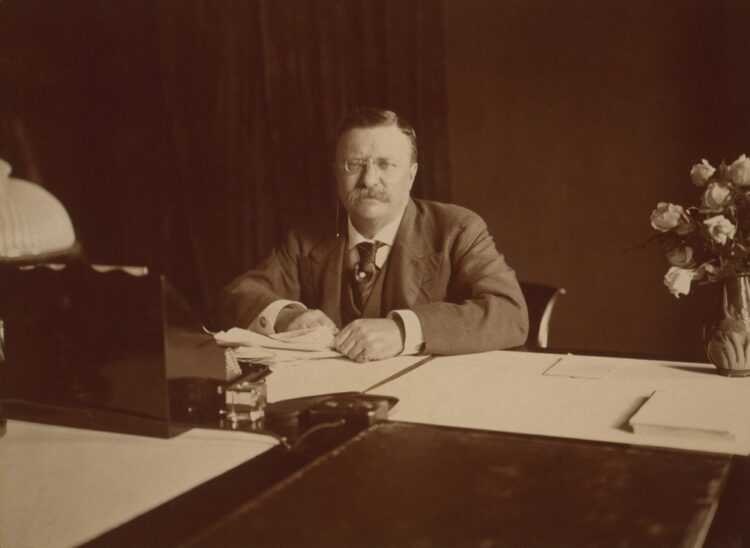 Theodore Roosevelt, Jr. was the 26th president of the United States and was elected to serve from 1901 through 1909. He was affectionately known as Teddy, along with other nicknames including Bull Moose and Rough Rider. He became one of the nation’s most famous politicians and an impactful servant of the people. Roosevelt was a prolific writer as well as a naturalist, conservationist, historian, and Statesman. Throughout his lifetime, he made profound statements that continue to resonate within the hearts of Americans today. Here are the twenty best Theodore Roosevelt quotes of all time.

Compass Classroom provides us with a few of the most famous quotes of Teddy Roosevelt. They explain that this quote was made by Roosevelt at Christmastime in the year 1898 when he delivered a talk to the Oyster Bay school children. It’s a quote that we can all live by to be happier and make the world a better place for everyone in it.

19. “It is not the critic who counts: not the man who points out how the strong man stumbles or where the doer of deeds could have done better. The credit belongs to the man who is actually in the arena, whose face is marred by dust and sweat and blood, who strives valiantly, who errs and comes up short again and again, because there is no effort without error or shortcoming, but who knows the great enthusiasms, the great devotions, who spends himself for a worthy cause; who, at the best, knows, in the end, the triumph of high achievement, and who, at the worst, if he fails, at least he fails while daring greatly so that his place shall never be with those cold and timid souls who knew neither victory nor defeat.”

President Roosevelt delivered this famous quote as a part of the speech he gave in April of 1910 at the Sorbonne, Paris Citizenship in a Republic. It was one of his most famous speeches.

18. “A vote is like a rifle: its usefulness depends upon the character of the user.”

This quote came out in An Autobiography in 1913. It is a quote that has great meaning to all persons living within a democratic society. It reminds us to be mindful when casting a vote for any officer or elected official because that vote could help a person with the heart to make a positive impact on the government to earn a place in governance. It also reminds us that voting is a privilege and should be used wisely.

17. “If a man does not have an ideal and try to live up to it, then he becomes a mean, base, and sordid creature, no matter how successful.”

This quote was made in 1915 and obtained by Joseph Bucklin Bishop from a letter to his son Kermit. It encourages us all to have ideals and to live up to them lest we become successful in business endeavors and forget that it is people that matter.

This quote was taken from a speech made on October 25, 1905, in Memphis, Tennessee. It alludes to the danger of crooked people in the business world who get away with their unethical or illegal activities. They are the biggest threat to this country. Sometimes crooked people go on to become the biggest successes financially, and it’s usually at the expense of others.

Brainy Quote chose this famous quote as one of their favorite Theodore Roosevelt sayings. It reminds us all that we must live in the present world with our feet firmly grounded in reality. It also encourages us to look to the future with hope and to dare to dream.

Theodore Roosevelt made this famous quote to remind everyone that our words do matter and they must be delivered in a tolerable manner to be heard. He was also known as a rough rider who was also a man of action. Speaking softly does not necessarily mean you won’t use the big stick. There are times when we must take physical action to accomplish things. You need to have some type of leverage. It’s not about physical violence, but rather political or social power.

13. “Far better is it to dare mighty things, to win glorious triumphs, even though checkered by failure… than to rank with those poor spirits who neither enjoy nor suffer much, because they live in a gray twilight that knows not victory nor defeat.”

Theodore Roosevelt believed in trying regardless of your track history. Failure is a mark of trying and most people fail at something at some time in their lives. The only people who do not fail are those who do not try. You’ll never experience the joys of victory or learn from failures by refusing to try regardless of past failures or successes. This quote is an exhortation to take action and do something for the good of the order.

Theodore Roosevelt had a deep understanding of the human condition, but he also realized what we are capable of accomplishing. He saw ability in every person who was willing to act and put forth an effort. His exhortation to all citizens of this nation is simple. Do what you can. Use the resources you have, and do it wherever you are. We can make a big difference in our communities or the lives of the people around us if we simply look around, see what’s needed, then do what we can.

11. “Believe you can and you’re halfway there.”

Theodore Roosevelt had a special way of encouraging people by talking about simple truths. His philosophies were direct and straight to the point with no-nonsense rhetoric. He encouraged us all to believe in ourselves and our abilities. There is a lot of truth in the statement that belief in our abilities gets us halfway to reaching our goals. If you don’t believe you can do something you’re not likely to try. If you don’t try, you’ll never know.

Good Reads listed this famous quote as one of the best delivered by Roosevelt. He acknowledged that none of us enjoy failing. He follows that it’s a far worse thing to never try than to fail. he was full of encouraging words.

This may be one of Theodore Roosevelt’s most famous quotes. They’re words to live by because they encourage us to continue pressing forward even when things get so hard that they seem impossible. We can’t give up hope and we cannot stop trying. Sometimes we just need to tie a knot in the rope and hold on.

This is yet another famous quote from Roosevelt that has endured through the decades. There is a lot of truth in this saying. You can have all of the knowledge in the world, but if you don’t care, people are less inclined to listen to what you have to say. If you have passion for the things you talk about, it’s practically contagious and it can draw people to you to hear the words you have to say.

7. “Nothing in the world is worth having or worth doing unless it means effort, pain, difficulty… I have never in my life envied a human being who led an easy life. I have envied a great many people who led difficult lives and led them well.”

This famous Theodore Roosevelt quote holds great meaning and relevance in our lives today. We tend to take for granted the things we have that cost us little or nothing. When we have to work hard for something or make a sacrifice for that thing, we understand its true value. If you live an easy life with everything handed to you, those things are less likely to hold meaning or value. Roosevelt knew the value of hard work and making sacrifices to obtain something better, be it material or philosophical. The quote applies to a great many situations including building a great nation out of turmoil or making the lives of people around you better. It’s a saying that we should all consider. If we invest more effort into worthy causes, the world would be a better place.

Theodore Roosevelt was a man of action as well as a man of words. He lived by the words he spoke, which encouraged those around him. His words still ring true today, long after his death. He’s telling us that it’s okay to make honest mistakes. It’s something we all do in our lives, and the only people who do not make mistakes are those who sit idly by and do nothing.

Jobs Blog revealed this short simple statement made by Theodore Roosevelt. He was a man of many words, followed by many actions. He enriched his mind and philosophies by keeping up with current literature on various subjects. It kept him informed about what was going on in the world around him, but it also imparted a greater knowledge base. We retain much of what we read and it is stored in our brains for later retrieval and use as needed. It encourages us to continue reading and growing in our knowledge. The information becomes synthesized in our database-like brains and can re-emerge just when we need it the most.

Most of us know the difference between right and wrong. Even though we may not do wrong things, it doesn’t mean we’re doing the right things. This was a statement that was made in protest of inaction on the part of people who can make a difference.

Teddy Roosevelt had a deep conscience and he encouraged others to follow their consciences. There’s a little voice in the back of our heads that nudge us to take action when something needs to be done. This was his way of telling people that it’s essential to make decisions, follow your heart, and do the things that you know are right.

2.“Whenever you are asked if you can do a job, tell ’em, ‘Certainly I can!’ Then get busy and find out how to do it.”

We love Theodore Roosevelt for his can-do attitude and willingness to try. He was a great encourager for the men and women of this nation. He encouraged us all to have a winning attitude and to have the courage to step up to the plate and do whatever needed to be done, even if we need to figure it out along the way.

Roosevelt distinguished the difference between work and play. He encouraged others to take their work seriously and to do it to the best of their abilities. He also noted that it’s okay to play hard and enjoy yourself.