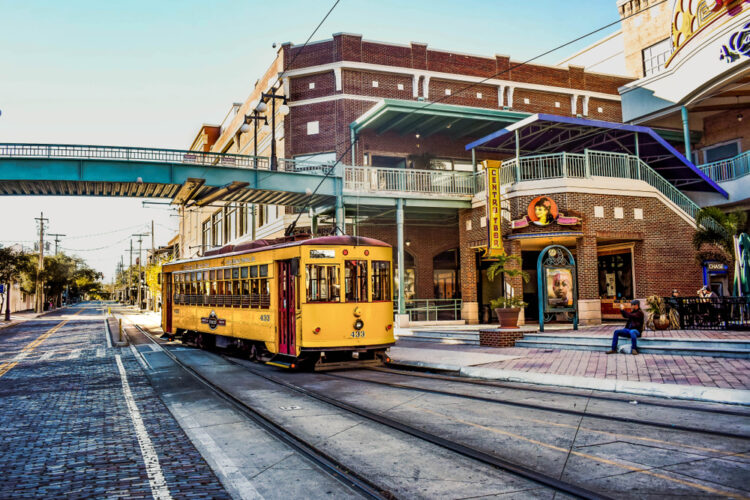 Downtown Tampa, Florida is a great place to live and a great place to visit. The central Florida city is located on Tampa Bay which leads to the Gulf of Mexico. The Bay is a beautiful setting for this beautiful city. There is plenty to do and see in downtown Tampa. The city is filled with family friendly activities, dining, shopping, and a vibrant nightlife. There are plenty of parks and pedestrian walkways as well as the rivers and Tampa Bay. The city is filled with history, culture, and entertainment. 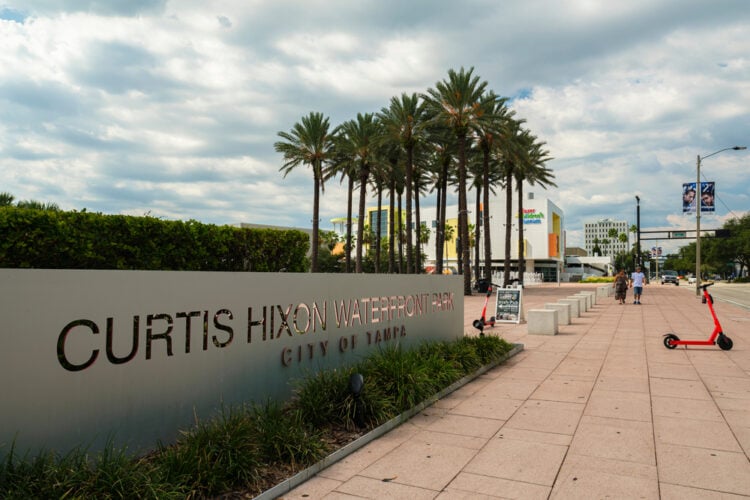 Curtis Hixon Waterfront Park is located on North Ashley Drive. The park has many park like activities for locals and tourists to enjoy throughout the year. Since 2013 Curtis Hixon Waterfront Park has hosted a monthly concert series featuring local musicians from central Florida. The family friendly event is held on the first Thursday of the month. The park’s grass is tiered offering a small amphitheater for guests to spread their blankets, enjoy food and drinks as they enjoy live music in a beautiful setting.

Zoo Tampa is located on West Sligh Avenue in Lowry Park. It started in the 1930’s with a small number of animals native to Florida. In 1982 the Lowry Park Zoo Association was formed to take over management of the zoo for the city of Tampa. It opened to the public in 1988 on 24 acres of land. Today Zoo Tampa covers 56 acres. Zoo Tampa saves endangered and threatened animals from Florida, Asia, Africa, and Australia. The zoo’s goal is to protect the wild life and keep them in what would be their natural habitat environment. The zoo currently has 1,000 animals and offers educational programs for its guests. 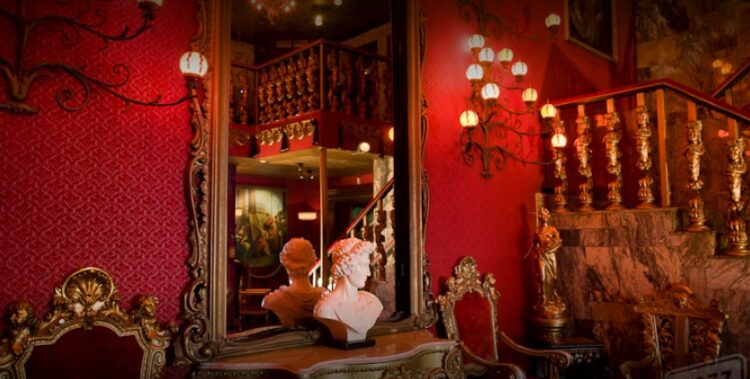 For those looking for fine dining in downtown Tampa, Bern’s Steak House is a must. Located on South Howard Street, Berns specializes in serving aged steaks cut to order, a large wine collection, and an extensive dessert room. Bern’s has their own farm where the vegetables are grown locally. Bert and Gert Lazer were visiting Tampa from their home town of Manhattan in the early 1950’s and were inspired to stay and start their own business. They started a luncheonette and eventually purchased Beer Haven. With the help of several investors, the Lazer’s started Bern’s Steak House. They continued to expand their successful steak house. A favorite in downtown Tampa, the Lazer’s son David continues to run the restaurant. 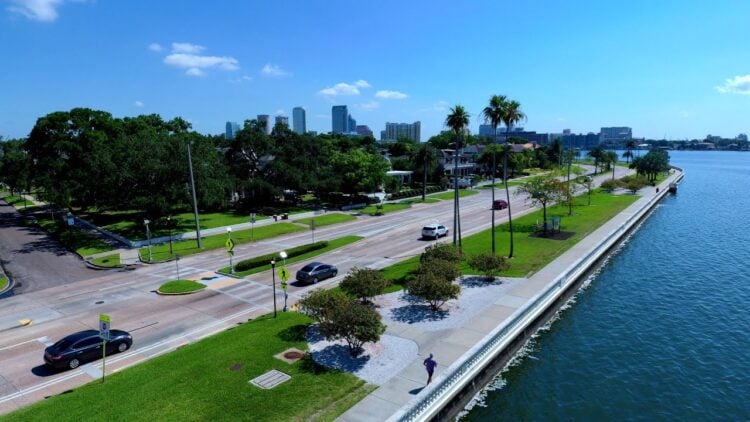 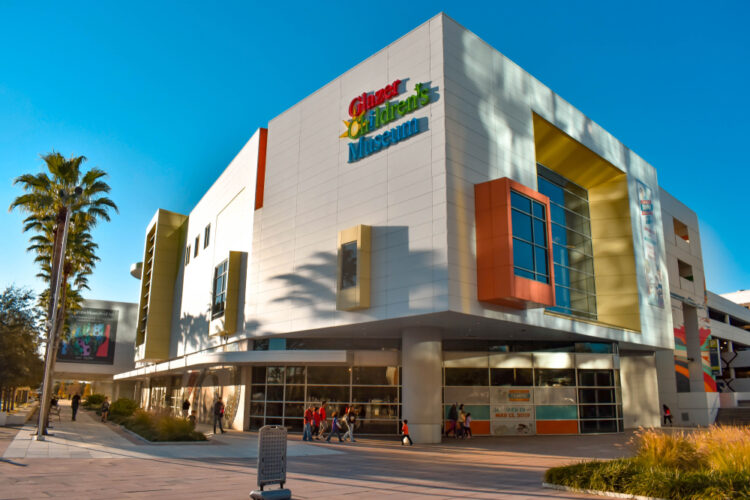 Glazer Children’s Museum is a fun, safe place for children to learn. It’s located on West Gasparilla Plaza next to the Tampa Museum of Art and Curtis Hixon Park. It was founded in 1986 by community volunteers and was originally a small storefront location called Kid City. The museum has continued to grow. Today it covers 53,000 square feet. Glazer Children’s Museum has 170 interactive exhibits for children to learn as they play. The different ares have themes. There are often traveling exhibits too. 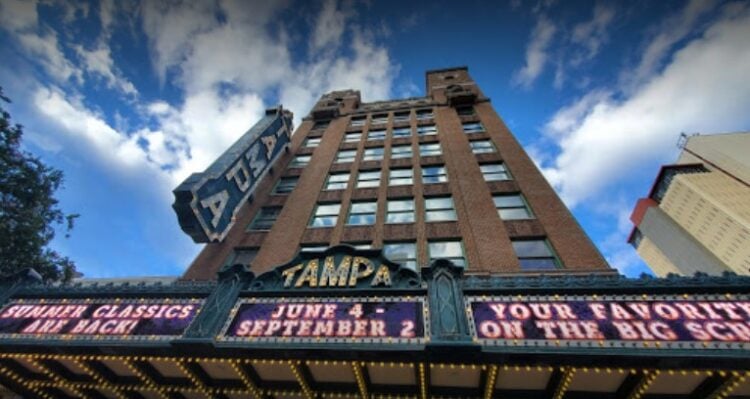 Tampa Theater is the only non-profit movie theater in Tampa. It was designed by architect John Eberson and opened in 1926. It’s design is similar to other movie palaces built in the 1920’s. Like many older movie palaces, Tampa Theater faced being torn down during the 1978’s but was saved by the community and named on the National Register of Historic Theaters in 1978. Tampa Theater has gone through many restorations since. Today, mostly independent, foreign, and documentaries are shown at Tampa Theater. The stylish historic building is often featured in movies and music videos. 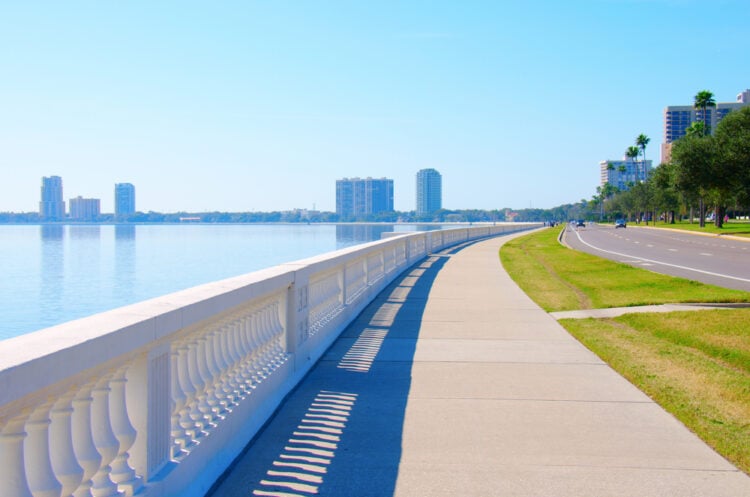 Bayshore Boulevard is the perfect place in Tampa to take a walk, jog, or bike ride. Bayshore Boulevard is a linear park trail and green way located north of Columbus Statue Park. The 10 foot wide sidewalk starts at Platt Street and ends at Gandy Boulevard. It runs along Tampa Bay and has a marina for water access that includes boat ramps. There is a 3 mile road bike lane as well. Along Bayshore Boulevard are benches, water fountains, bike parking, and fitness stations. There are mileage trail markers. 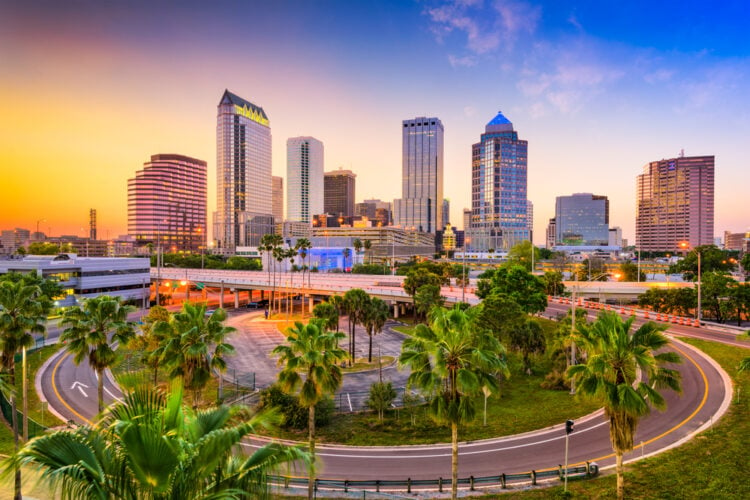 A self guided tour is a great way to explore any town. Downtown Tampa has many available through different touring companies. They connect through an app on your phone. It’s a way to get a feel for the city and choose locations you want to get to know better including restaurants, shops, bars, museums, and historic locations. 813 area tour is a popular self guided tour company. They offer tours from Ybor City to Channelside and Water Street. 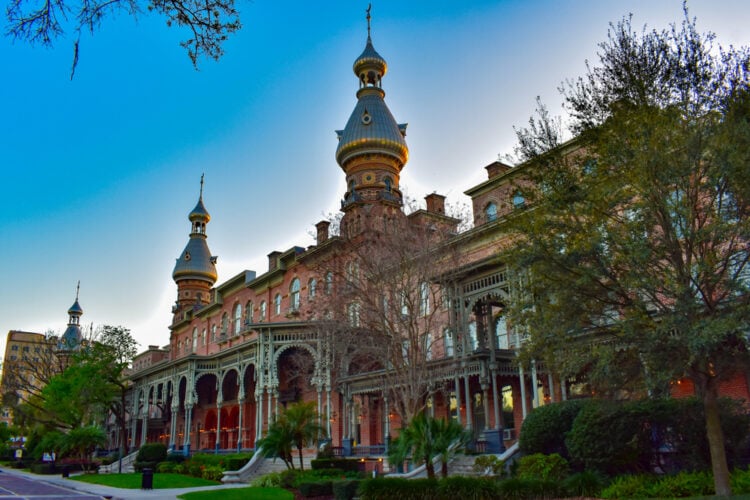 The Henry B. Plant Museum is located on the University of Tampa’s Plant Hall. The Moorish style Plant Hall was once a lavish 511 room resort hotel located at the terminus of a railroad track system. Henry Plant was a nineteenth century American Railroad pioneer. The museum houses exhibits from the nineteenth century including European, Middle Eastern, Asian, and American furnishings, art pieces, and photographs. The museum holds nineteenth style events like “Upstairs Downstairs”. The museum was established in 1972. It is open to the public daily from 10 am to 5 pm. 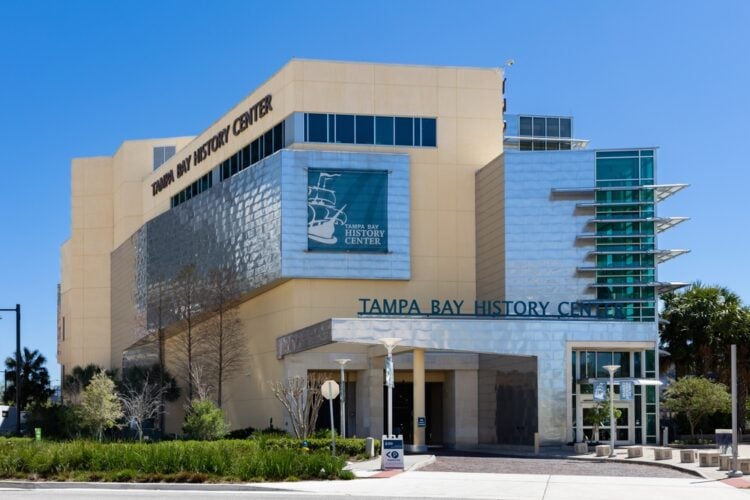 The Tampa Bay History Center is located on Old Water Street in downtown Tampa. History buffs will love to stroll through the museum which has 3 floors of exhibits, both permanent and temporary, that reflect Florida’s history for the past 10,000 years. The exhibits include displays of Florida’s earliest indigenous inhabitants and extend through the European explorers of the 1500’s including the Spanish conquests up until present day Florida and Tampa as a modern port city. Permanent exhibits inclu6de a reconstructed tobacco store, exhibits dedicated to Florida’s first inhabitants, and a “Cowman and Crackers” exhibit. The Tampa Bay History Center was founded in 1989 and expanded in 2009 with 60,000 square feet of space. This includes event space for special occasions and educational space. The museum is open to the public daily from 10 am until 5 pm. 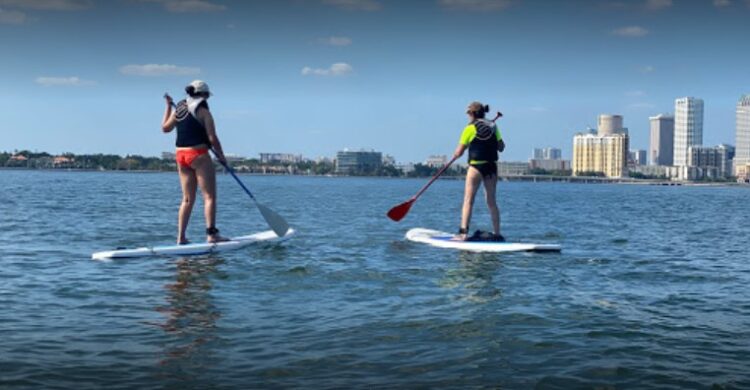 The Tampa Bay SUP Company offers an exceptional experience paddle boarding, kayaking, or pedal boating on the Hillsborough River. The SUP Company is located on the waterfront at the Marriott Hotel on Water Street an Florida Avenue. The company offers a variety of services including rentals of paddle boards, kayaks, and pedal boats, lessons, eco-tours, and team building exercises along the Hillsborough River. This fun adventure offers amazing views of Tampa’s downtown skyline and, often, dolphin sightings, along the Tampa coastline. For those who love to be on the water, the Tampa Bay SUP Company offers a great way to enjoy the water and the views of beautiful downtown Tampa. 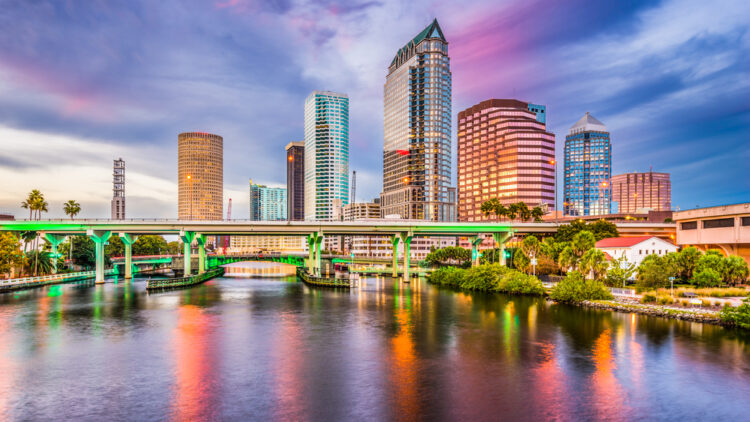 Tampa has a vibrant nightlife. If you’re looking for some nighttime fun there are several clubs to choose from. The Castle is a favorite Dance Club located on North 16th Street. Upcoming events include Midnight Mass, Communion After Dark, 80’s Video Night, and Star Wars Night. Hyde Park Cafe is a high end night club that is popular in downtown Tampa. Located on West Platt Street, Hyde Park Cafe has a strict dress code and a guest list that everyone wants to be on. The Premier Club owns other venues including The Kennedy’s and The Cabana Club. 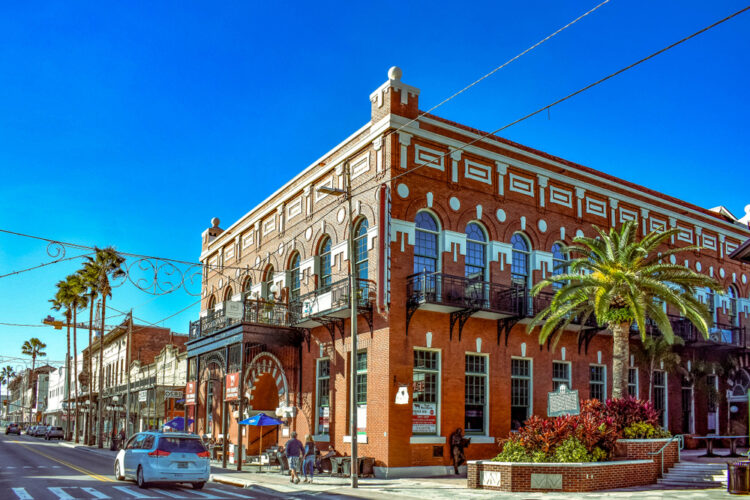 What better way to explore historic downtown Tampa than a walking tour. The Historic Center of Tampa offers guided tours that cover 1 mile and last 90 minutes. The Ybor City Tour includes the Ybor Cigar Factory. The Downtown Tour includes the Sacred Heart Church and The Hub, the city’s oldest bar. The Downtown East discovers what is dubbed the “Harlem of the South”. The Madame Fortune Taylor walks through the life of freed slave, business owner, and community leader from the 1800’s. Fortune Street is named for Ms. Taylor. 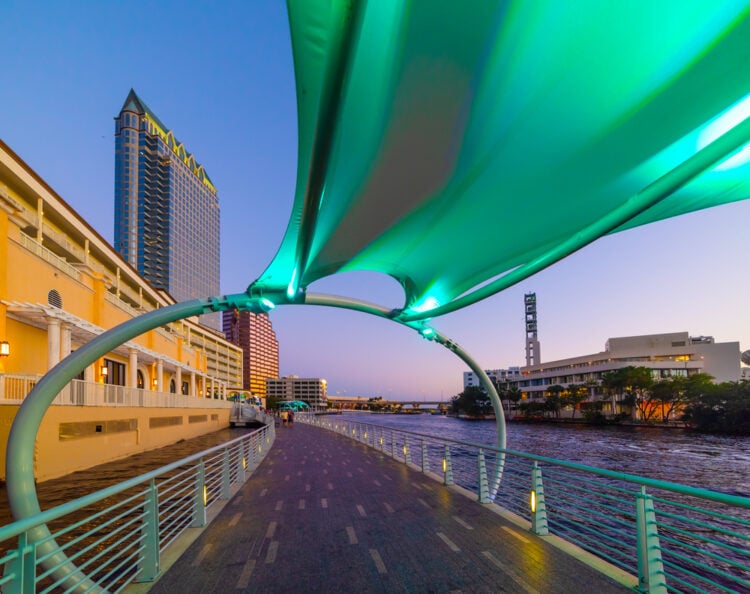 Tampa Riverwalk is a great way to explore the riverside city. The Riverwalk is located in the Channelside area of Tampa Heights and runs along the east side of the Hillsborough River. The pedestrian walkway is open to walking, jogging and biking. The area was first developed in the mid 1970’s and redeveloped in 2003.. There are parks and open spaces, retail shops, art galleries, and restaurants to enjoy as you meander along the river. 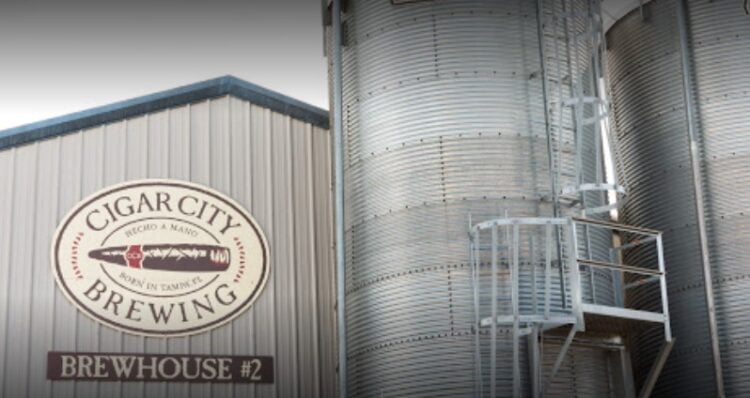 Cigar City Brewing started hand crafting beers and lagers in 2009 at its Spruce Street Brewery and Tap Room in 2009. Since, the company has a Downtown Brewery located in Thunder Alley across from the arena, and its newest location in the Tampa International Airport. The brewery prides itself on its inspiration of Tampa’s cigar industry history and creating beers, ales, and lagers inspired by the Florida sun and citrus flavors. High quality ingredients are used to create the beers with vegan and glutton free options. The tap room includes Florida inspired cuisine and offers tours. There is a members only El Catador Club for those who are interested in sharing and learning about craft beer. 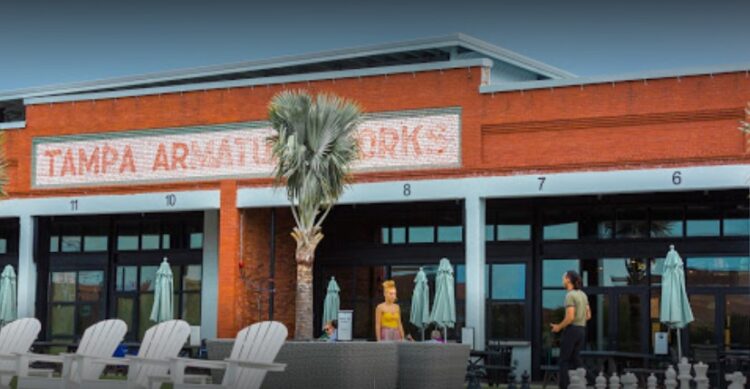 Armature Works is located in the Heights neighborhood on North Ola Avenue. The 73,000 square foot space was one the warehouse for Tampa’s TECO system which housed, repaired, and served as a connection for the city’s streetcars during the first half of the twentieth century. The warehouse was re-purposed during the 1960’s into a mixed use building. The warehouse was further renovated with a modern warehouse ambiance. The exterior is brick while the interior features skylights and wood flooring. Today the space includes work spaces, restaurants and bars, several event spaces, and hosts the Heights Public Market. 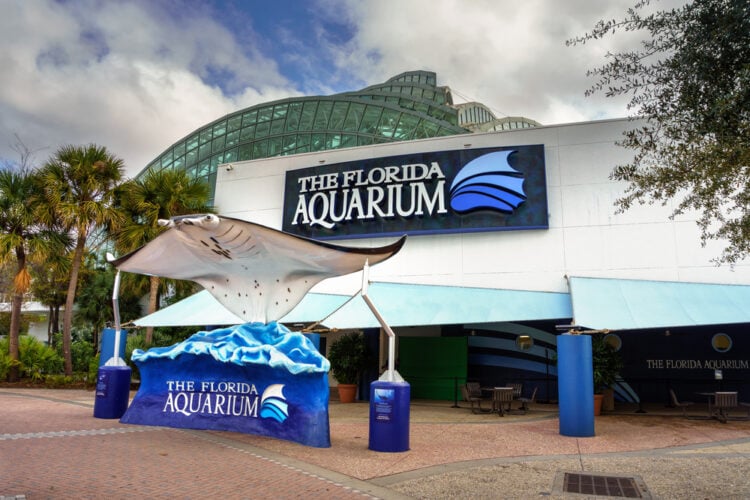 The Florida Aquarium is located on Tampa’s waterfront at Channelside and York Street by the Port of Tampa Bay’s main terminal. The 200,000 square foot space houses 8,000 species. It’s an amazing place to explore aquatic and avian species. The exhibits are interesting and informative. The Florida Aquarium offers a guided Trail Talks program, an extensive wetlands trail, and educational opportunities including the Coral Conservation Program. The Aquarium offers special events and Evening Tide talks as well as group deals for camps and field trips. The Florida Aquarium is open daily from 9:30 am to 5:00 pm. 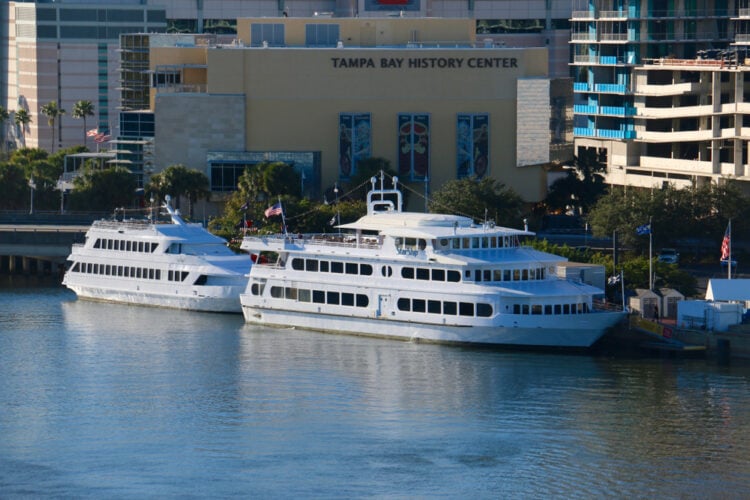 One of the best things to do in downtown Tampa is to experience the vintage streetcars. It’s a great way to learn about the history of Tampa and to see points of interest. The first electric streetcars were introduced in 1892. They were a popular way to travel to work or family outings through 1946 when they went out of service. The line returned in 1984 as downtown Tampa was growing. The lines include three types of streetcars. The historic replicas, the open air Breezer Car, and the Birney which is a fully restored original streetcar that ran from 1923 to 1946. The Tampa Trolly is a wonderful way to explore downtown Tampa and enjoy the nostalgia. 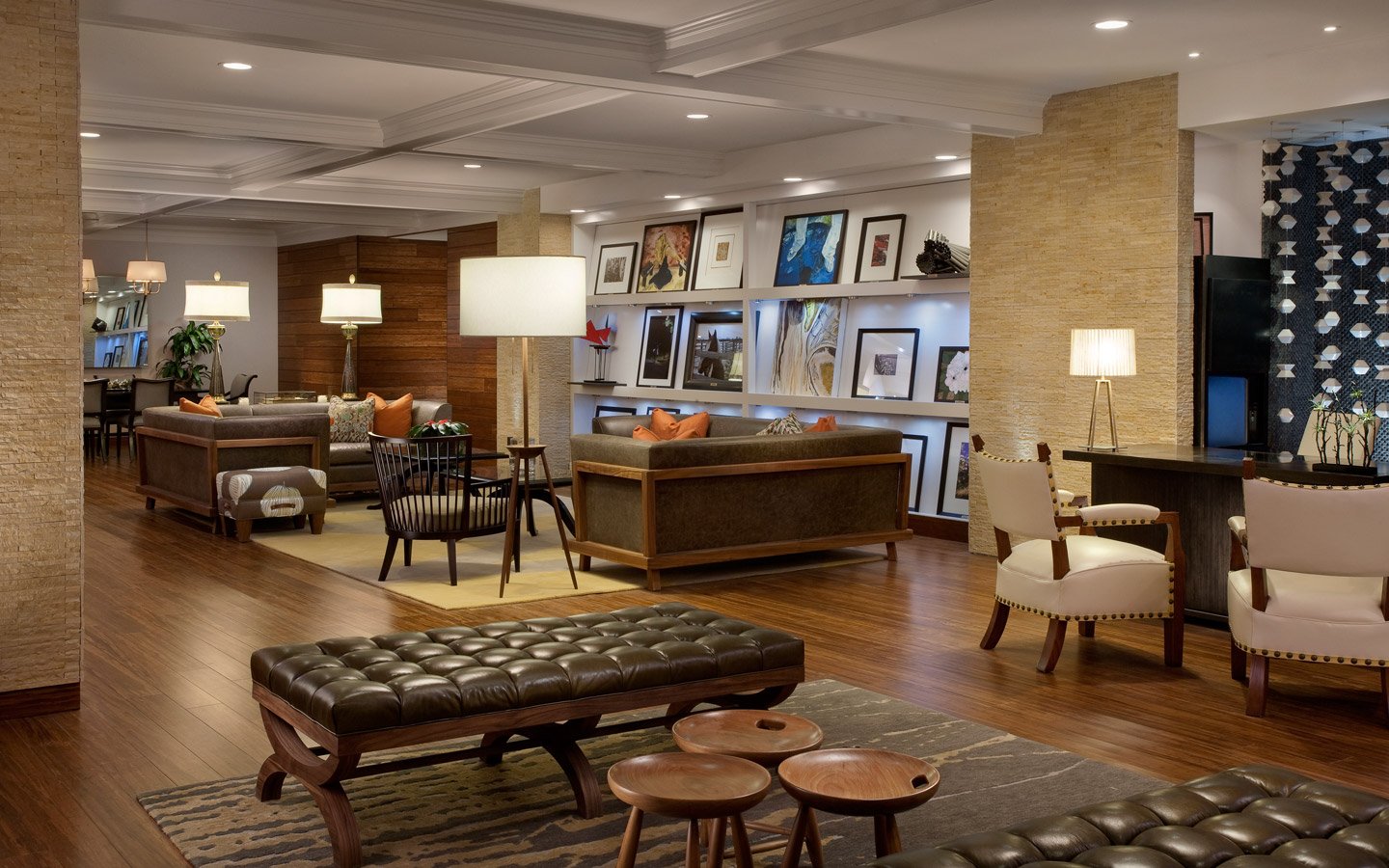 Nashville, Tennessee has an abundance of famous attractions, and there are… 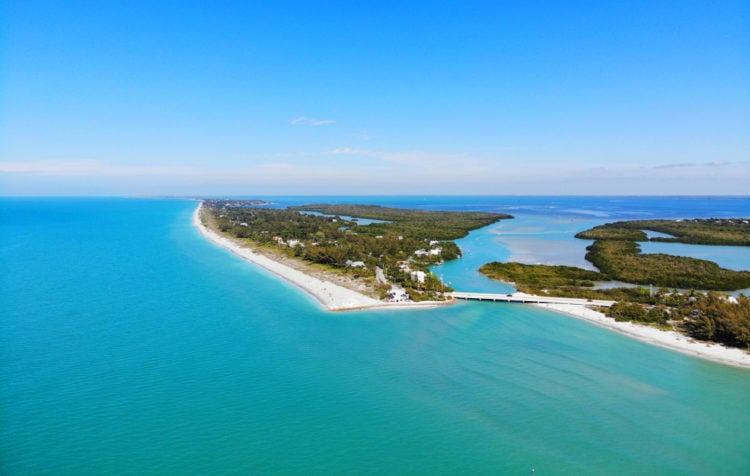 Whether you’re a first-time visitor or a long-time resident, Florida has… 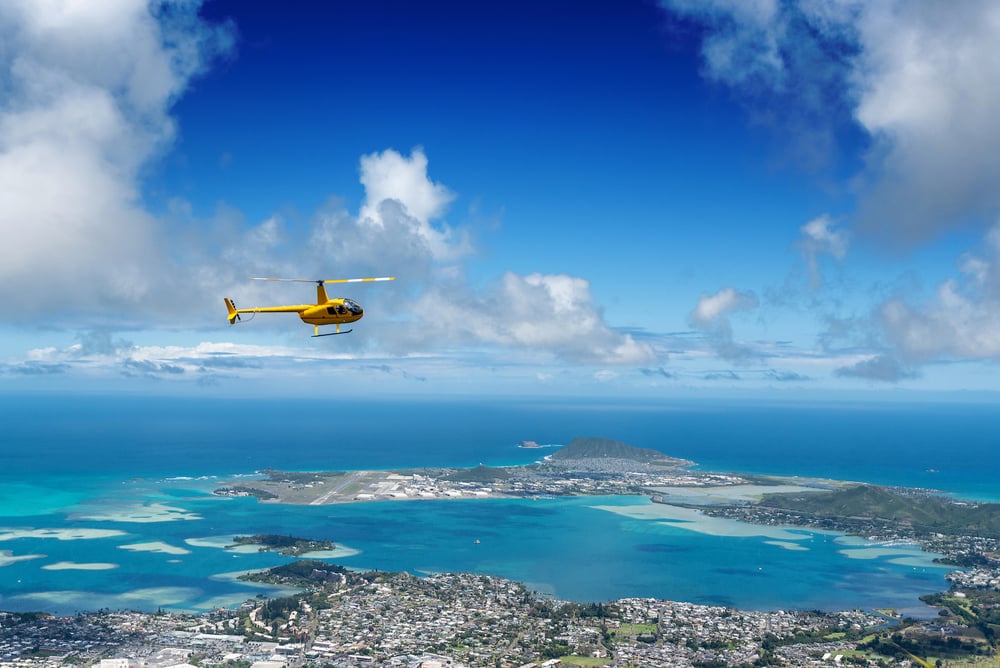 Oahu is a popular island in the U.S. It is also… 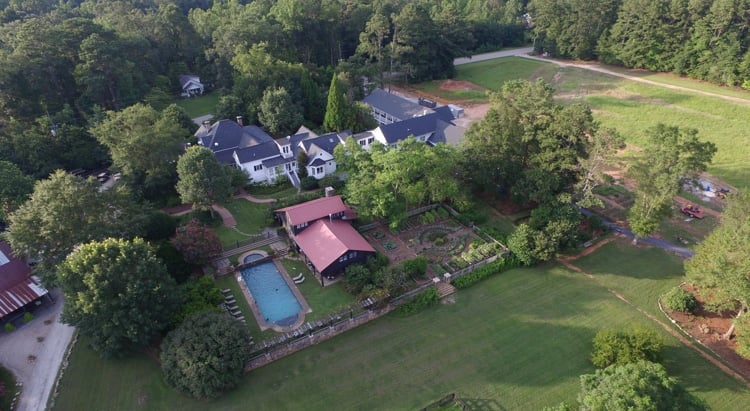 Although Serenbe, Georgia, is merely 35 miles Southwest of Atlanta, the… 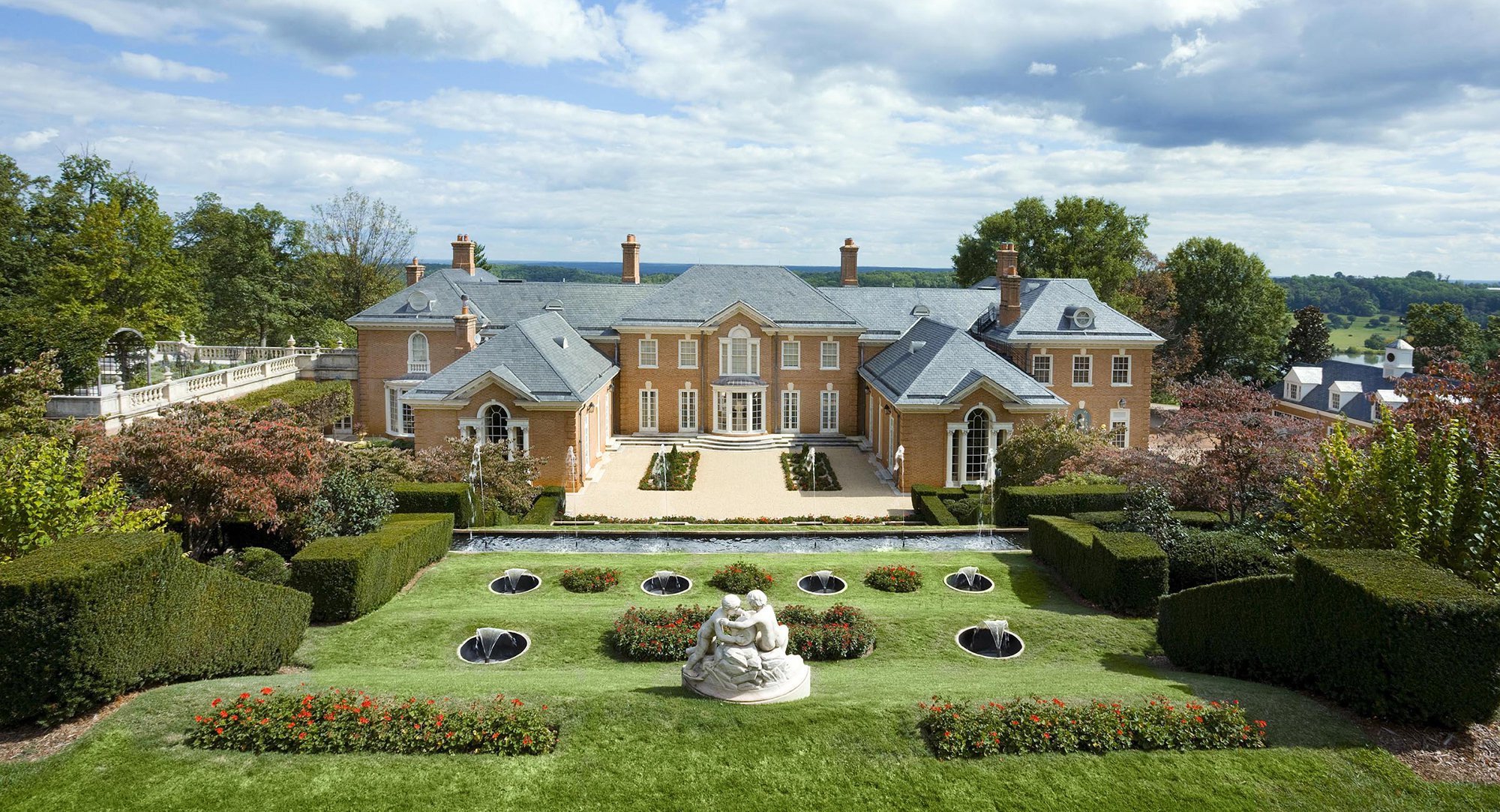 Wine lovers know how to enjoy the finer things in life…. 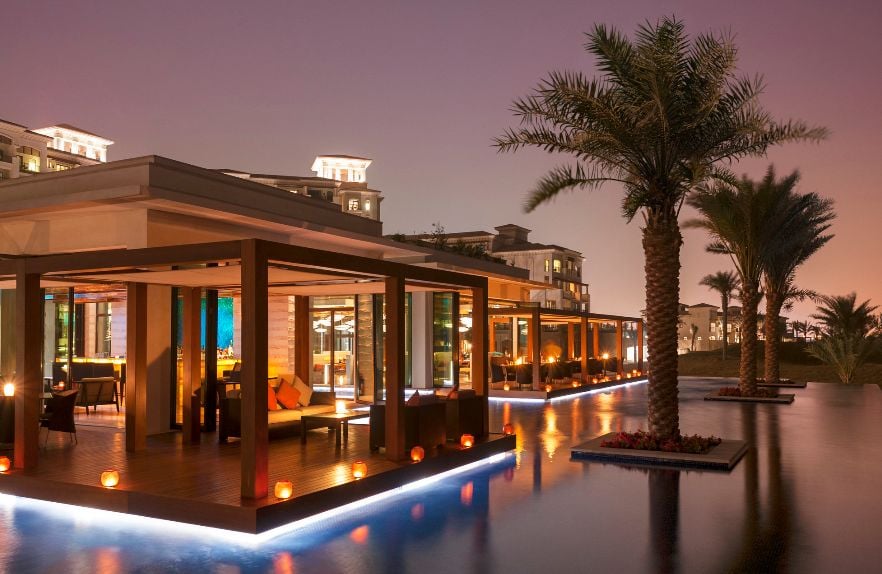 Do you travel a lot? It doesn’t matter if it’s for…