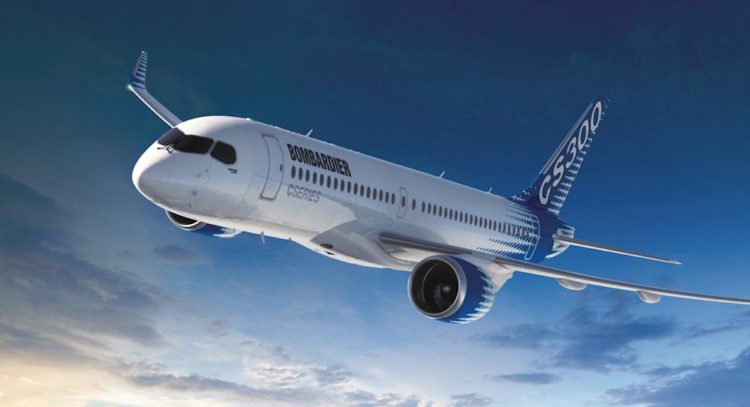 Commercial air travel has evolved a great deal over the years. Anyone that traveled during the Golden Age of commercial flight would undoubtedly agree with that statement. In fact, people that routinely traveled on aircraft 25 years ago would be forced to agree that it’s completely different to do so today. There are many reasons for this but one of the reasons is the aircraft themselves. Many of the commercial jets that were so popular two or three decades ago were also reaching the end of their service life at that time. That means that something had to be designed in order to replace them.

Today’s jets are much more advanced. In addition, they’re expected to be designed so that they can fulfill many roles as opposed to being designed for only one thing. One of the newer aircraft to come along is the Bombardier CS300. This is an aircraft that really hasn’t been around all that long, especially when you consider the fact that a lot of Boeing 747s have been in service for more than 40 years. If you want to know more about the Bombardier aircraft, read through the list below. Some of these things are likely to surprise you.

Chances are, you’ve heard the term wide-body jet in the past. This refers to an aircraft like the 747 which has three separate groups of seats that are positioned from one side of the aircraft to the other. A narrow body jet like the Bombardier, on the other hand, only has seats on the left and right sides of the aircraft, leaving space to walk in the center.

This is not a transcontinental airliner, nor is it a regional passenger jet. It’s designed for the most common types of flights that arelines handle, those trips that are 1,000 miles or greater, yet not several times that distance. Typically, these types of flights originate and end in the same country and last only two or three hours at a time.

3. It first flew only five years ago

It’s important to note that this is an aircraft that didn’t take to the skies until 2013. Furthermore, it wasn’t delivered to its first customer until three years later. As a result, it’s easily one of the newest airliners on the market today.

4. You might hear it referred to by different names

5. It was actually designed to replace a staple in the airline industry

Most people that have flown on an airliner have made at least one or two trips on a Boeing 737, one of the most popular and reliable aircraft ever built for commercial air travel. However, those aircraft are rapidly aging and the overwhelming majority of them are far beyond their service life. This jet was designed to replace them.

One of the things that people love about this particular aircraft is that it consumes a lot less fuel than the airplane it was designed to replace, the 737. In fact, the Bombardier consumes only about three-quarters of the amount of fuel required to fly a 737 the same distance.

7. It costs less to operate

Thanks in part to its reduced fuel consumption, this airplane is also more economical. Airlines expect to save about 25 percent of their operating costs when compared to the 737 that will be phased out as a result of this aircraft.

Pilots like to have two things when they’re flying- they want an aircraft that’s reliable and safe, and they want one that’s easy to fly. This aircraft seems to be capable of producing both of these things. While it really hasn’t been in service long enough to determine its safety record in the long-term, there haven’t been any major issues with its safety that have cropped up so far. By the same token, both the reliability and the ease with which this aircraft can be flown have been well documented by pilots and so far, the reviews are overwhelmingly positive.

9. The cockpit is much more spacious than you might expect

Aircraft are notorious for their cramped cockpits. It doesn’t matter if you’re talking about an airliner, a military jet or a general aviation aircraft. There’s not usually enough room to move without bumping into something. One of the things that sets this aircraft apart is that it has more than enough room to spare in the cockpit, something that pilots will undoubtedly appreciate.

Older commercial jetliners are typically made of aluminum. This aircraft features more composite materials. There are several benefits to this change. First and foremost, the aircraft is safer because it’s less likely to suffer from metal fatigue as it ages. In addition, it’s lighter so it’s able to go the same distance on less fuel, thereby making it more economically sound.