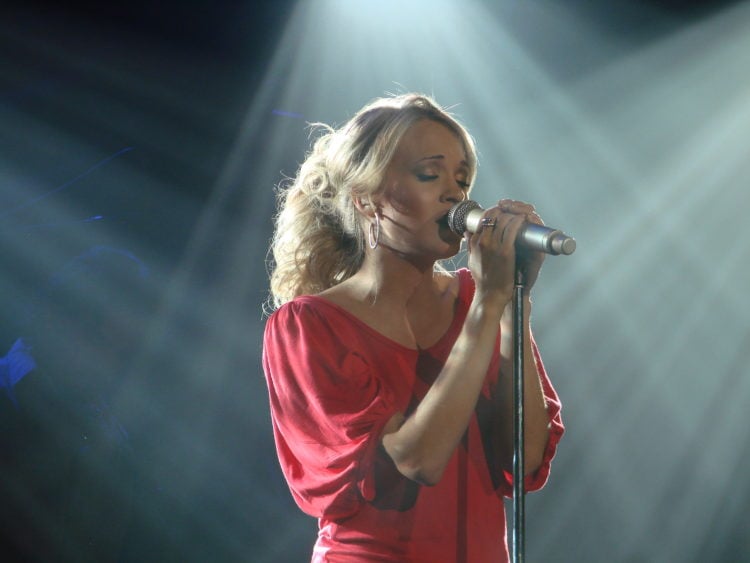 Carrie Underwood is an American country music singer who rose to the top of the music charts and still remains one of the top artists in her genre. She’s been remarkably successful in her profession, and we recently learned that her net wealth is an incredible fortune of $65 million. We wondered if she earned all of this in the music industry or if she has other businesses on the side, so we checked into her history along with business dealings to learn her secret. Here is what we found out about how Carrie built her massive fortune.

Underwood is a native of Muskogee, Oklahoma where she was born in March of 1983. She was raised in a rural area, but there were plenty of venues for singers in the area. She was young when she started competing locally in talent contests and she soon became well known for her singing ability and she garnered a following of fans of her music. When Carrie was just 14 years old, she met with a representative of Capitol Records in Nashville, but in the end, the producers decided not to take a chance on her. She was still very young, but Carrie was determined. She signed up for the American Idol competition when the show was in its fourth season, and she won the contest, which gave her career a solid launch. As a part of the deal, she was awarded a recording contract and this is how her career in country music began.

After winning the American Idol competition, she released her first album which was a big hit with fans. She had received a great deal of attention while competing on the program so although she was a relatively new face and voice, there were millions who watched the show who were already familiar with her music and they wanted to hear more from the budding superstar. “Inside Your Heaven” was her debut single release and it was a tremendous success with fans in 2005. Other singles which became popular included “I’ll Stand By You,” “For Once in My Life” and “Wasted.” She followed up just two years later with h second album release, and in 2012, she had reached her fourth release “Blown Away,” with all albums becoming big hits for the artist. Although Carrie has experienced her share of criticisms, she also has a solid fan base who buy her albums and attend her concerts, packing them out. Her music gained acclaim in America, Europe, Canada, and the United Kingdom, making her an international superstar.

By the year 2014, Carrie Underwood at the age of just 34 had achieved the status of superstar celebrity. She was named by Time magazine as a member of their 100 Most Influential People in the World for 2014, which is a coveted distinction. She was also the first solo artist in country music to reach the number one position on the Billboard Hot 100 list for a debut single, which is another impressive achievement. In addition to this, she has been the recipient of a total of seven Grammy Awards. She is also one of the richest American Idol contestants, with her achievement of such a high level of success. Not everyone who wins the contest continues forward with such a strong trajectory, but Carrie’s wide vocal range, stage presence and ability to put on an amazing show combined with the good fortune of winning American Idol to propel her to dizzying heights of success.

Carrie took a slower path to superstardom, choosing to graduate from high school, participate in sports and also serving as a cheerleader. She was a smart girl who was not only a member of the high school’s Honor Society, she was also salutatorian of her graduating class of 2001. She went on to attend college, opting not to pursue a career in music at that time. She enrolled in classes at the Northeastern State University in Tahlequah in her home state of Oklahoma. She graduated with her undergraduate degree in 2006 achieving the status of magna cum laude in the discipline of journalism After college, she worked at a zoo, a veterinary clinic and she also waited tables. Carrie is a strikingly lovely girl who also participated in a variety of beauty pageants as well as doing a little singing on the side. Although she has an amazing talent for singing, she didn’t actively pursue a career in the industry until her win at American Idol.

Carrie Underwood could have chosen a variety of different professions. She is a college graduate who could have just as easily gone into journalism, but she gave music another shot by becoming a contestant on the hit television show American Idol. She won the competition, defeating all other contestants and was awarded a recording contract. This was the break that Carrie needed to get her music career jumpstarted. From a close inspection of her past and Underwood’s work history, we see that she didn’t work at any other high paying jobs, and it’s obvious that she’s made her millions in the music industry as a singer. All the talented young artist needed was just one lucky break, and although she was considered by a record label at age 14, the timing just wasn’t right. It would be several more years when Carrie Underwood would emerge as an educated and more mature person with a little more life experience, with a voice that captured the attention of the American audience and a few savvy record producers. She pushed forward and carved out a niche in the country music genre and is still going strong as one of the more popular female artists throughout her home country of America as well as several other countries in the world. Carrie is truly an international superstar.