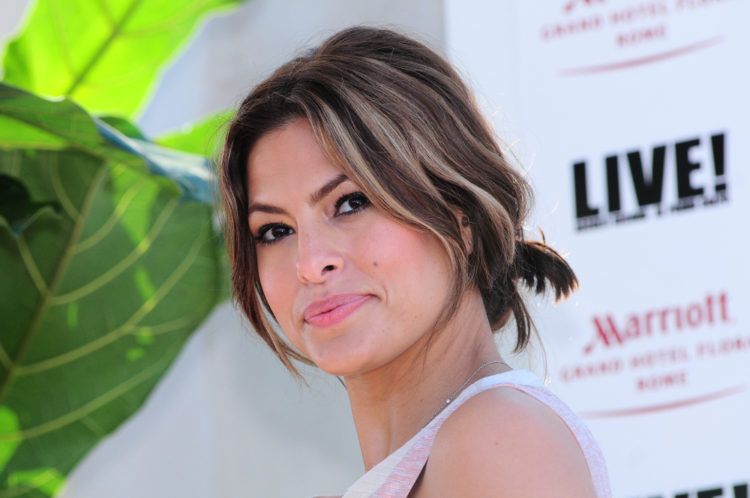 Eva Mendes is known for the beauty mark on her left cheek, which led to her being teased while in junior high school. She was so bothered by the mole that she was bent on removing it when she turned 18 but changed her mind. That mole now sets her apart from other actresses, and it birthed her career in the entertainment industry. Of course, her skills still helped to push Eva Mendes’ net worth to $20 million. She is artistically gifted with her passion for designing, boosting her earnings from acting. Here’s your chance to learn all about how she achieved her net worth.

Giving Up Her Childhood Ambitions

Mendes never dreamed of becoming an actor; instead, her childhood ambitions involved growing up to be an astronaut and an opera singer, but her heart mostly leaned on being a nun. According to Kauffman, the actress revealed she grew up in a family from the lower working class. Still, Mendes had the determination to buy her mother a big house and a car from what she assumed would be huge paychecks from a nun job. Her hopes of becoming a nun were shattered when she was ten when her elder sister asked her how she expected to buy their mother a big house, yet nuns are not paid. That was all it took for little Mendes to bury her wishes to be a nun, and it was time to rethink her career aspirations. She focused on her studies and graduated from Herbert Hoover High School, Glendale, in 1992. She then attended California State University, Northridge, to study marketing, perhaps determined to hold down a 9-5 job to afford to buy the big house and car she had promised her mother. According to Aceshowbiz, destiny came calling when Mendes was a university student. Her neighbor was a photographer, and a talent manager happened to browse the photographer’s portfolio when he noticed Mendes’ picture. The casting agent then convinced Mendes to consider a career in the entertainment industry.

The actress was not sure but when she watched the film “Annie,” she knew she wanted to go into acting. However, she had to start from commercials and music videos as most other actors do while learning the ins and outs of the acting industry from Ivana Chubbuck, a professional instructor. In 1997, she appeared in Aerosmith’s “Hole in My Heart” music video for a split second. Still, that was enough to introduce her to the entertainment industry as the beauty spot on her cheek became her trademark. In 1998, she appeared in Will Smith’s “Miami” music video. At the time, the pay must have been a bit on the lower side, considering that she was new to the industry. Reportedly, music video models with little experience earn between $50 and $75 per hour, while those with vast experience rake in from $75 to $100 per hour. Fortunately for Mendes, she juggled this pay with what she could get from being in commercials. She made her film debut in a 1998 horror film “Children of the Corn V: Fields of Terror.” However, she barely had any acting skills and revealed she was so disappointed with her performance that she could not bring herself to watch it. Thankfully, she did not wallow in self-pity but hired an acting coach to develop her acting skills. She still landed a few minor roles, even in Steven Seagal’s “Exit Wounds.”

Unfortunately, she was yet to make her mark because, according to Express, her voice was replaced to a higher-pitch. Mendes demanded an explanation and was told her voice did not sound intelligent enough. Despite such hurdles, the actress continued perfecting her skills, and her breakthrough was “Training Day,” perhaps catapulting her to stardom because she was nude in it. It got her unwanted attention, and Mendes confessed she had to carry a blade, but she must have been compensated well because she said the role was pivotal in her acting career. If Denzel Washington made $12 million from the film, Mendes must have earned at least a million. Halle Berry was paid a bonus of $250,000 per breast for appearing topless in “Swordfish”; therefore, the Latina actress could have received a bonus too for baring it all on the screen. Since then, she has appeared in tons of movies, including “2 Fast 2 Furious,” Hitch,” and “The Women,” before shelving her acting career in 2014 to focus on being a full-time mother. However, according to E! (https://www.eonline.com/news/1107893/eva-mendes-gives-the-classiest-response-after-someone-calls-her-fashion-ugly), she wants to get back into acting and would prefer working with her partner Ryan Gosling.

Even if she took a break from acting, the actress has been super busy in the fashion industry. According to Hola!,  Mendes’ mother and sister inspired her to venture into fashion designing because she saw the extra effort put into their dressing. She loved to see then feel good about wearing beautiful clothes, and the desire to do the same continued in her teenage years. Thanks to her strict upbringing, she would spend time at the mall with her friends because she was not allowed to go anywhere else. Her love for fashion resulted in Mendes establishing a collection for New York & Company. As Fashion Network published in 2017, the Eva Mendes Collection had achieved $50 million in sales within a year, and they were hopeful that the amount would double. As the article explained, her collaboration with New York & Company was further facilitated by the chain’s decision to expand into more locations and stock more of Eva Mendes Collection available in both the brick-and-mortar stores and online. She has collaborated with the chain for over eight years. Her inspiration comes from the women in her family, and the fashion designer is determined to give her customers the best. When she realized one of her pantsuits was not selling, she asked them what went wrong so she could change it to their preference. With such a work ethic, it is clear that the sky is the limit for Mendes.

The Five Best Gins to Use for a Paper Plane Cocktail

The 20 Most Dangerous Bridges in the World

How Irina Shayk Achieved a Net Worth of $25 Million